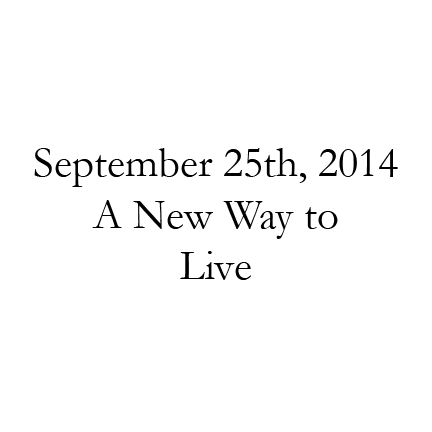 Please be aware that this story contains brief harsh language and drug references.

George never even considered it as a possibility. LSD? Marijuana? Cocaine? The mere thought of them made him cringe with disgust. Even when he was young, during the time of his life that everyone christened the Immortal Golden Years, he never had the desire to experiment with drugs. He was never sure why — he’d had roommates who took drugs, and the occasional coworker who lived out on the fringe — but he’d never even come close to trying them. He guessed that his marriage to Lisa may have had something to do with it, and after that, being a father kept him on the proverbial straight and narrow. He hated that phrase, even though it was true.

But his age wore on him; it was a number he was obligated to wear, like a shackle in the prison of normal existence. Lisa had long since been released from prison, and even though he missed her ability to extinguish his loneliness, he never wished that she were with him. Mostly for her sake.

Now that she’d moved on, and his children had grown up and had children of their own, he scraped his mind for an experience he could call new. His son recommended that he get a puppy, to which he replied:

His daughter suggested that he try something more exciting — he expected her to say something like “mountain biking” or “wind surfing”; instead, she said “board game night,” to which he responded by hanging up the phone.

The smell scraped his senses even more than his desire for novelty scraped at his mind. He stepped over to his neighbor’s door and knocked.

A scruffy young man stuck in his late twenties answered, no doubt surprised to see a wrinkled eighty-three-year-old at his apartment door. The pothead scratched the top of his shaggy head and tried to cough away from the door.

“Do you know where that smell is coming from?” he asked, his voice sounding rickety compared to the pothead’s.

George nodded, and then continued:

“Do you know where I could get some?”

The kid perked up.

“Um. What kind are you looking for?”

George sat in his apartment, everything he needed in his hands. He lit the bong and took an inexperienced hit, coughing up a hacking storm. He took another, and another, and another, until everything slowed, warped, and oozed around him. He felt wrinkled stress and agitation and peer pressure slide off of him like soapsuds in a hot, hot shower. He woke up the next morning.

The next night, he went next door again.

George hesitated. He’d never appreciated being hoisted into a category, being part of a target market or an audience. He hated being judged almost more than he hated being ignored. Finally, he let his defenses down, and answered.

He smoked again that night, and the next night, until he knew the sloppy guy next door by name and budgeted his monthly finances for “recreational spending”. Finally, one day, the pothead neighbor handed him something else.

Again, and again, and again. The pothead introduced him to another guy — Tripp. Sharp, muscular, taut, wired, and an excellent supplier of whatever the hell you wanted to get high. At first, Tripp suspected something from selling to an old man like George. “I thought drugs were for kids. What the fuck are you doing with them?” he muttered.

“Same thing that you’re doing with them,” George countered. But he didn’t buy him off with his words. Nobody did, but George didn’t need to. He had plenty of money to buy him off with instead.

Two months later, George had tried it all.

He knew where to get the cheapest cocaine, and how it worked. His clothes reeked of Marijuana, and clung to him wherever he went. He knew the intricacies of LSD, and how many trips it took to see his wife again. Then he realized that he didn’t need his wife. He didn’t even want his wife. But not because he didn’t miss her. No, he did miss her, but it was something else.

He still hadn’t removed the shackles of normal existence from his arms, despite all the raging non-normalcy that abounded in his eighty-three-year-old life. He’d only added to them. He saw them every day, and made the marks deeper and deeper, until they scarred and scraped and marred his skin.

No, he was glad his wife wasn’t there to see him. Because after every trip, he didn’t even want to see himself, no matter how rich and deep and real it was.