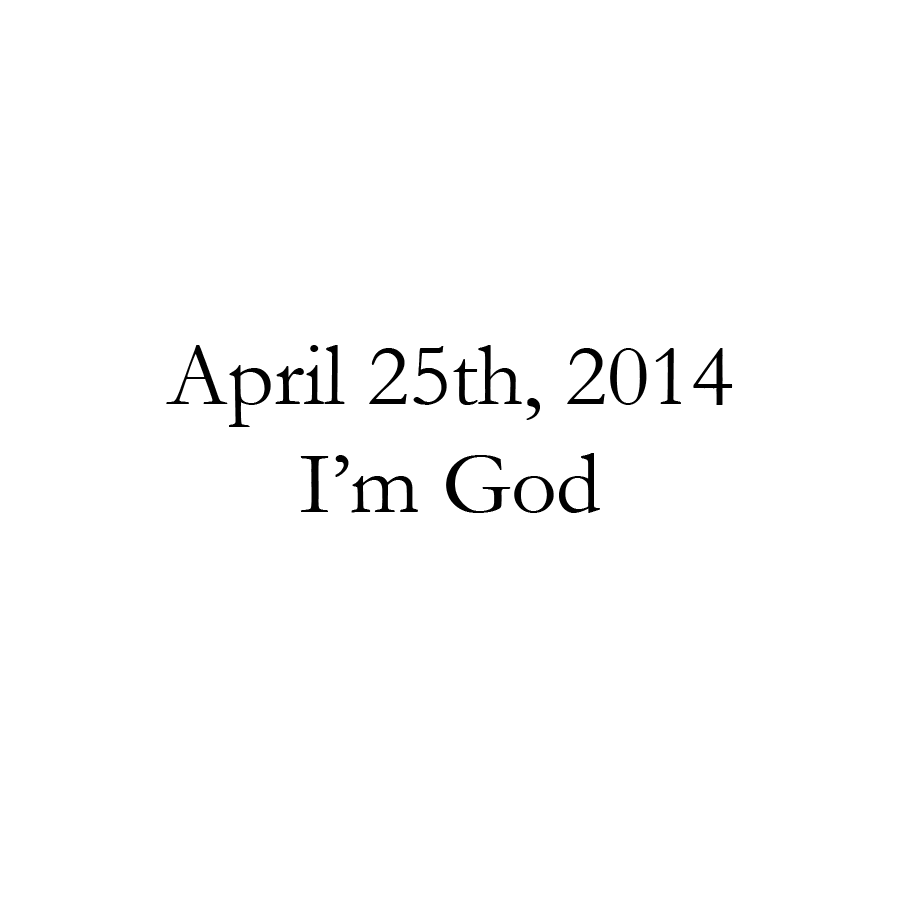 He was wearing black pants and a black minimal button down shirt, not like God would, but probably more like someone would if they were pretending to be God. His hair was combed smoothly, and showed hints of grey, but I couldn’t for the life of me pin his age.

“Wow”, I said sarcastically, “I never in my life expected to meet God, but I guess if I was going to, Times Square would be where it’d happen.” I looked around.

“Hey, everyone! It’s God!” The tourists laughed. The New Yorkers just kept on walking as if they’d heard nothing.

“Where would you actually expect to meet me?” He asked, smiling, but ignoring the attention.

I was little taken aback – I’d expected him to just brush me off after his joke was finished and I drew attention to his idiocy, but I guess he wasn’t satisfied with the one trick gig. Some people don’t know when to stop, especially in Times Square.

I braced myself, expecting his laughter to be sarcastic or condescending, but it wasn’t. It was genuine, and nurturing, as if somehow in the strangest most unexpected way, he could water plants with his laughter.

“Hmm. A lot of people think that. I don’t spend much time at either.”

Despite his calm and amiable nature, I was still skeptical, and had to get to Aureole by 7 to meet Cynthia for dinner.

I wasn’t sure if there was a question mark at the end of his sentence or not, but I pretended that there was and kept talking.

I wasn’t sure if there was a question mark at the end of that sentence, either, and it was beginning to irk me.

My cell phone rang. He noticed it, and nodded for me to take it.

I reached into my pocket and looked at the caller ID.

She sounded worried. Or distant. And from a voice that I knew so intimately, it was disorienting to not know the difference.

The man who called himself God gave me a nod and waved:

“Tell Cynthia that I’d love to meet her sometime, too. And have a great time at Aureole.” He looked at his watch. “You’d better hurry if you’re going to make your 7 O’clock reservation.”

And he was gone.

I scanned the crowd, but he was lost in the ocean of people, churning in Times Square.

I ran through the crowd, hoping to get a glimpse of the black shirt that looked nothing like what god would wear.

Cynthia’s voice whispered in my ear.

“Are you looking for someone?”

Wait – Was that him?

“Are you in Times Square looking for someone? What are you doing?”

She interrupted me with a calmness threaded through her voice.

“Because someone just walked up to me and told me that you should keep looking, and you just might find them.”