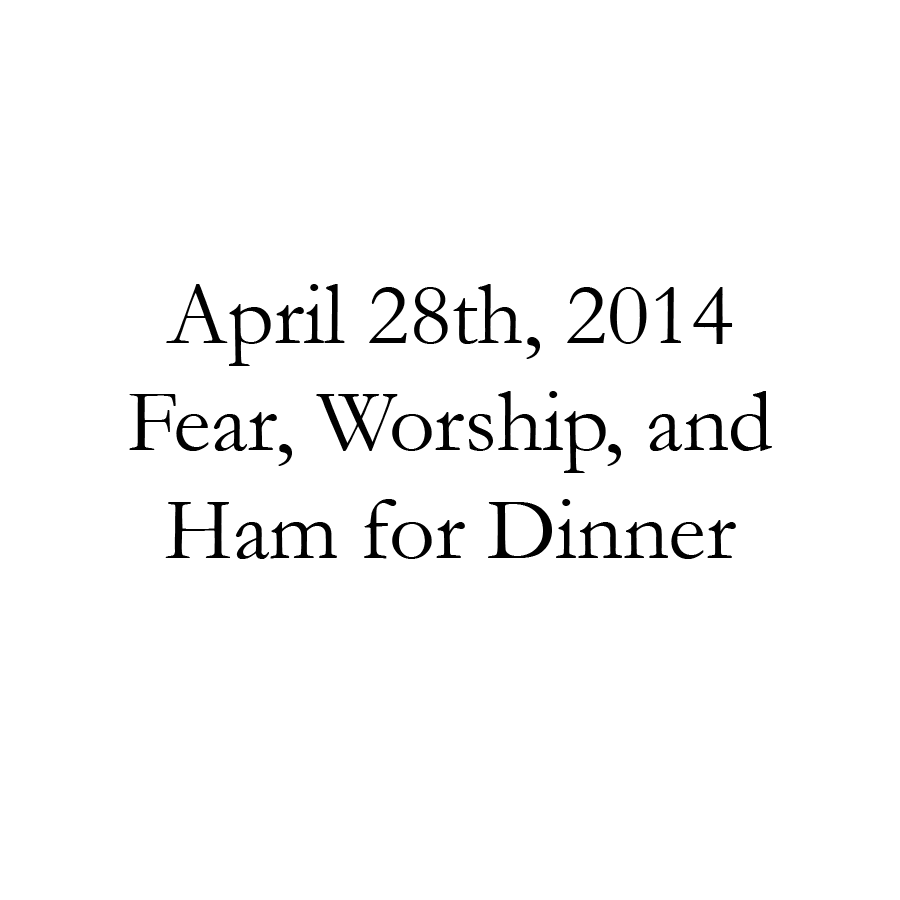 Fear, Worship, and Ham for Dinner

A farmhand who worked for my dad once told me that what you fear is what you will worship. I was too young to know what the hell that meant, and have since worshipped many things: Man, beast, and fallen angel. But I’m still not sure that’s what he meant.

The idea that fear and worship are intertwined never worked for me. There were plenty of things that I feared, but wouldn’t ever bow a knee to – Most of them were things that I would have sooner pulled out my shotgun and blasted to hell than I would have knelt down and prayed to.

And there were things that I would bow a knee to, but wouldn’t ever in my right mind pull a gun on. Julia was one of them. I got on one knee when I proposed, and she accepted. But I didn’t feel any fear.

Everyone kept on telling me how to keep a wife: How to treat her and how to make her happy, how to not drive each other insane and how to make the other feel special. I knew how to do those things.

I made sure she had everything she wanted.

Every morning I’d wake up with her arm around me. I’d sneak out of bed and tend to the animals, check for eggs, feed the pigs, milk the cows. Then I’d head back inside and we’d make breakfast.

She had the most delicate smile, like an egg that’d been dropped but hadn’t broken, and would stay good just long enough if you cradled it and carried it alone. But cracked eggs don’t last, so if you’re gonna use them, you have to use them right away, because they’re fragile as hell.

But her smile was beautiful, and I didn’t care if it was fragile as hell, I liked it and I wanted to keep it. I made sure she had everything she wanted. It was hers.

The only time I felt fear and worship mix was when I asked her when we were going to have a kid. She laughed, and we talked. But I gave her everything she wanted, and so we didn’t. “Maybe someday, but not this season.” She said.

And not the next season, either. I gave her everything she wanted, I made sure it was hers, because the only thing in hell that I didn’t want to do was break that delicate smile.

And so every morning, I would wake up with her arm around my chest, and I’d sneak out and tend to the animals, check for eggs, feed the pigs, milk the cows.

I walked to the lawn in the early morning as the sun peaked through the south trees. Her scent still wrapped around my body like a rope.

But this morning was different. The pigs tore into the feed bin and came spilling out across the lawn near the fences.

When I got to the lawn, I saw the feed, and I saw the pigs. They lay across the barren, musty ground, sinking into their own vomit. Some of them rolled and belched and let out small squeals of morbid indulgence. They’d all overeaten, gorged to death. All except one.

The single swine strolled up to me and blinked, like he was expecting something.

A week later, she said she wanted fresh ham to cook for dinner guests. The Franklins had just had a second child, and she’d invited them over. Of course, I said yes.

I slaughtered that last pig, and we enjoyed ham for dinner with the Franklins and their two kids.

“So,” Mrs. Franklin asked, after dinner, before we served dessert. “Any plans for growing the family? You two would make such great parents.”

Mrs. Franklin smiled. “Well, I’m sure you will when the time is right.”

My wife looked at me and smiled that delicate smile.

The one that I worshipped so much I feared would break.