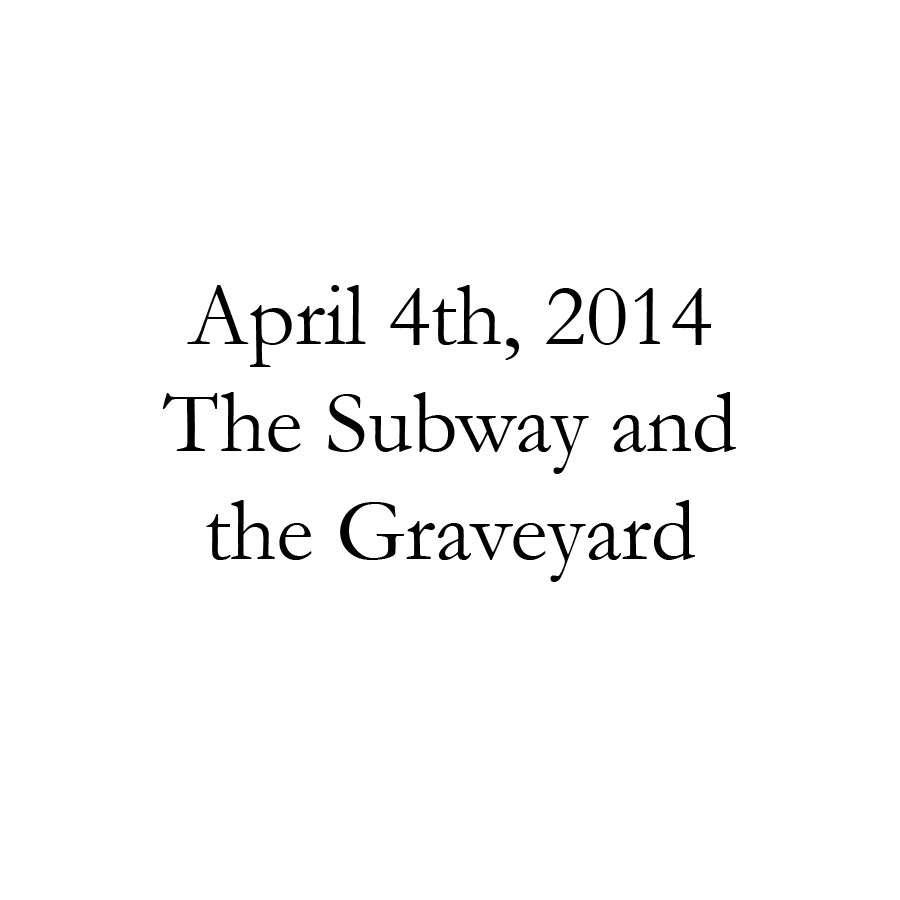 The Subway and the Graveyard

There’s a subway train that takes me through life, roaring and racing, but never stopping. Okay, well, maybe there is a delay, sometimes, but there’s no transferring, even though if you’re not careful, you may get off at the wrong stop. Then you’re just screwed. We see things outside this subway car window, but all we can do is gaze, and sometimes we can’t even do that, because we’re going through a tunnel.

I sat down in this subway car, across from a quizzical looking man with dark skin and a thoughtful resonance. The car emerged from a tunnel, sending a brash of strong light into our eyes. We shielded our eyes, and as they slowly adjusted to the light, we looked around.

The Subway car passed a graveyard, but there was a dull familiarity that left me uninterested, and my curiosity remained un-piqued. But the field of bygone lives grabbed the attention of the man sitting across from me. Not enough for him to do anything more than crane his neck and peer out the window, but he kept his gaze on the field of tombstones until the subway passed. Finally, he tore his gaze away from the window and shielded his face again.

We stopped several times, every time halting to consider if this was the stop where our journey ended – but it never was. I’d heard the stories of the final stop, and I’d talked to family and friends who’d been there before. I shared no doubt that the last scheduled stop, the 347th street station, would be unlike anything I’d felt before.

But the train continued on. We passed soldiers and forests, rivers and work offices, cell phones and breakups, lovers, fistfights and church services, toddlers, mountains and mustaches, dishrags, orange juice, and table tennis. Some of these things caught the eyes of certain passengers, but I waited. Finally, we neared the final stop.

This is 347th St. this stop is the second to last stop on this line.

The man sitting across from me stood; ready to step off and onto the 347th St. platform. He didn’t hesitate, but confidence didn’t flush his face the way one would expect of a man about to depart the train taking him through life. Finally, the train stopped. I peered out.

The sight was beautiful, but not perfect. The trees were tall and strong, but I’d seen stronger. The buildings were clean and majestic, but I’d seen cleaner and buildings with the royalty that deserved every bit of attention they received. The soldiers were poor, and the forests were thinner than usual, but beautiful, nevertheless. The work offices were like gray tombs, and the cell phones and breakups and lovers and fistfights were just shadows of what they should have been – but that didn’t keep them from carrying a raw beauty, the kind that shimmered and made you wonder whether or not you imagined it.

I stood, curiously peering out the window.

The doors opened, and the man stepped off the train.

As the doors opened, I caught a breeze of a cold, bitter, yet comforting fragrance – the kind that might remind you of a fading memory or of an old blanket that you used to curl up with.

The train doors started to close –

I looked out, breathing in the deep familiar smell.

And the doors shut.

I shrugged it off as if I was just making sure it wasn’t my stop, and sat back down.

The next stop was the last stop, and that’s the one I got off at. I exited the subway car with almost no regrets. And yet, the only thing I want to know is what it was about that graveyard that made the man sitting across from me crane his neck, eyes locked, peering out the window until the subway passed.

No station is how they make it sound; no station is ever what you expect it to be. But if you’re not careful, you might get off at the wrong stop.