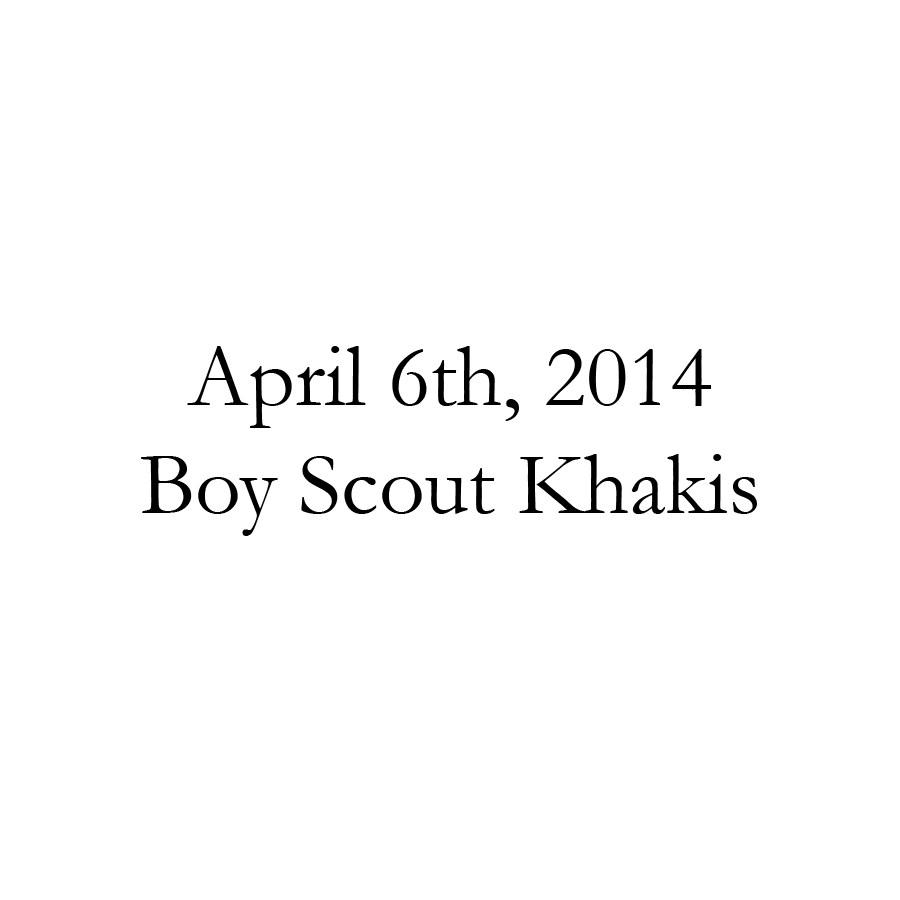 It was loud, it was hot, it was crowded – but when you’re an eleven-year-old boy scout at a festival, surrounded by inflatables, carnival games, hot dog stands and balloon animals, you hardly notice those things.

The scoutmaster gathered everyone together at the start of the day and rambled on about the itinerary, the schedule, the activities and all sorts of other things that make eleven-year-old boy scouts lose attention and send their minds wandering. He ended with:

“And please be safe – we don’t want any accidents or health issues. Have a great day!”

And we were off. We ran outside into the hot parking lot, khaki uniforms and yellow scarves, badges and caps. We bounced in the jump house and slid down the inflatable slide (the kind that gets so hot in the sun that the plastic canvas burns you when you touch it). We played carnival games, throwing discs onto pegs and making slap shots with a hockey stick.

Finally, after I’d done almost all of the games, rides and attractions, I waded my way through the parking lot and got to the largest inflatable. For a bombastic eleven-year-old boy-scout ball of energy, it was a dream come true. I got in line.

The line was long. And slow. I waited thirty minutes and the line barely moved. I tried to shade my eyes from the sun, but my eyebrows and forehead creased into a painfully unfoldable scrunch. Dark splotches of sweat started to form on my uniform as I breathed in the hot asphalt air.

But I ignored everything else except for this inflatable ahead of me – The line watched as the kids who had waited an hour took their time and enjoyed bouncing, then climbed the bouncy wall with a rope and slid down on the scalding hot plastic canvas. It was an experienced not to be missed.

What could be more fun that this inflatable? I imagined the infallible joy I would feel when I finally climbed in the inflatable and felt the rush of adrenaline take me. I’d feel a rush of satisfaction – the satisfaction you get from finally getting something that you’d seen, and maybe even heard about, but never got to experience yourself.

I looked at the massive inflatable in front of me, and the air between us started to bend and make waves in the heat that emanated from the black asphalt.

And started to reel.

My head slowly sagged, but my vision started to sag even worse. I shut my eyes, and felt that for a moment my mind had drifted outside of time and that no time was passing – while at the same time, feeling that an inordinate amount of time had passed.

Everything slowed and sped up, simultaneously.

I looked down at the cracked asphalt and fell.

I remember waking up, a crowd a people looking down at me in a circle. A woman rushed to her knees beside me. I remember thinking ‘I’m fine, relax,’ but I said nothing.

“Are you okay, sweetie?”

“Somebody, get a doctor!”

The crowd shifted and weaved closer. The woman propped my head up and yelled to get some water.

Suddenly, my dad appeared. In a swift, solid motion – confident, like the physician he was, my dad knelt down beside me, scooped me off of the scalding pavement, and carried me to the building. Members of the crowd nervously followed.

I was drifting in and out of awareness – my tongue was dry, my forehead was soaked in sweat, my stomach felt like a pot of boiling water, but I remember one thing. My father turned to the chubby man and said with a quick determination and confidence:

He carried me through the crowd, running into the building. He found an AC vent and laid me down on the ground next to it. He called for someone to bring over a fan and some water, and he unbuttoned my wet, sweat-soaked khaki uniform. He took a rag drenched in ice-cold water and laid it over my forehead. He took a cube of ice and put it in my mouth.

At this point, I’d cooled to a normal temperature and felt nothing more than a slight headache. I remember thinking ‘Alright, alright, I’m okay,” but my mind was stuck cycling through the words my dad had just said to a crowd of people.

To my eleven-year-old boy-scout mind, these words sounded like something from a movie trailer for a film that I might desperately want to see. I cooled off quickly, and recovered quickly, but the event had closed and people were starting to leave. The inflatable crew rolled up the jump house inflatable like a jelly donut and stuck it into the truck.

Only a few things could be more fulfilling than a giant inflatable. I imagined the infallible joy I would feel when I finally climbed in the inflatable and felt the rush of adrenaline take me, but it remained an imagination.

I’d never seen my father do something like that – I fully expected that he always would take care of me, and I know he had in the past, but this was different. I got a rush of care and protection that was showered down on me like I’d never felt before.

I laid on the linoleum flooring of a kitchen, my dad looking at me, holding the ice-cold rag, and felt a rush of satisfaction – the satisfaction you get from finally getting something that you’d seen, and maybe even heard about, but never got to experience yourself. My dad’s care was real to me in ways that it never had been before.

But I’d still like to jump in that inflatable.