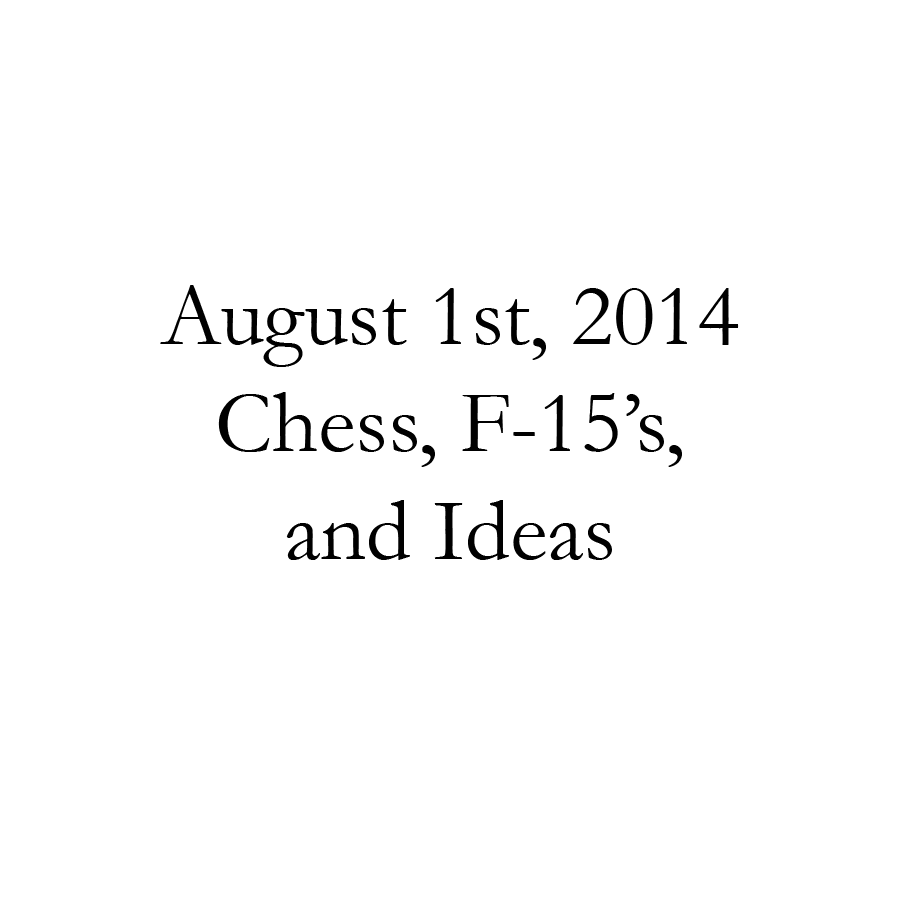 I move my thoughts around in my mind like chess pieces, wondering which ideas I might lose first, which ones I’ll have to sacrifice for a different thought, and which ones I’m going to shield behind a line of expendable thoughts until the end game.

But my mind is a little bit more complicated than a game of chess. Most of the time it is, at least. Not only am I carefully pondering my next move, stroking my chin or scratching my head, but as I lose myself, deep in thought, the only thing that becomes clear is the fact that I’m about to get hit by a linebacker, the size of a horse. Not only is it my move, but I have the ball. So I scramble, running like hell and dodging both chess pieces and linebackers, trying to step through the checkered field.

But my mind is a little bit faster than a game of football. I hear the linebacker behind me and throw a quick glance over my shoulder. The linebacker roars, louder and louder – but it’s not a linebacker at all. I turn to see a roaring car engine, bright and colorful, sponsors’ logos plastering the automotive shell. It blazes past me, leaving me in the dust of the checkered football field, tire tread marks scarring the turf.

Before I know it, a swarm of ideas race past me, throwing the entire field into twisted sheets of dirt and grass. One of the vehicles picks me and I land in the driver’s seat, and it’s not until then that I realize just how hard it is to drive an idea that’s moving at 200 miles an hour.

I struggle with the wheel and follow the other cars out of the stadium. We race through the crowded parking lot, swerving and sliding, until we hit the interstate. I press on the brake to slow down a little bit, but the idea doesn’t stop. And that’s when I realize that I’m not controlling this car at all. I’m just along for the ride.

A roadblock lines the freeway ahead of us, and a storm of officers close the freeway, cautiously. Some of the ideas ahead of us blast through before the gap closes, and we screech to a bleeding halt. The smell of burning rubber steams from the hot asphalt beneath us. I breathe, frantically, trying to get out of the car and leave the idea to fend for itself, but before I can, an armed officer steps to the window.

“Do you know how fast you were going?” He asks, in a ‘Don’t mess with me’ kind of voice, which is unequivocally justified.

I shrug, defeated, and climb out of the car. I hear another roar; lower, deeper, like thunder. I look up, expecting another car: an idea that got left behind.

A jet roars past us, filling the sky like a black streak across the open air and throwing a dark shadow on us below like a blanket. Another passes, then another, and suddenly, I’m in the air, holding on for dear life.

I land in the cockpit of a blazing idea, helmeted and blazing. I look around, and nearly black out. Missiles explode around me, and one of my wings shatters into shards of metal. My 30 million dollar idea has been hit, and nose-dives for the ground.

I tremble and my fingers search the control panel for the eject switch. I flip the level and am rocketed out into the sky, praying that my parachute opens.

I look down, over the expanse of my mind.

And feel the parachute open.

My mind is a little bit more complicated than a game of chess; most of the time it is, at least. I fall to the open ground, and I begin to wonder which idea I might lose first, which one I’ll have to sacrifice for another, and how long I’ll be able to keep this game alive.