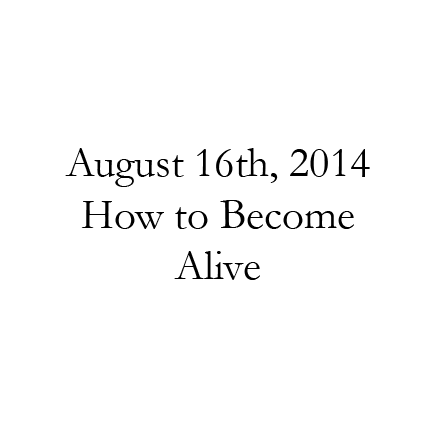 I floated into being, like lightning from the sky, or like a snapping of fingers, the only problem was, I didn’t know what either of these phenomena were, because I’d only just been brought into existence. I found myself sitting in a grey room, lit with grimy office fluorescent-like lights that seemed to come from nowhere. It was all quite strange, and I reeled in my recent creation, trying to figure out what the hell was going on.

“Welcome to existence, Pre-Birth Assignment Division.” A voice said, as if its mundane day job was to greet recently created beings. “We’re pleased announce that you’ll be granted an identity as a life on the earth.”

I blinked, and looked around. The walls lit up, like windows into other rooms, and an identity-less figure appeared. It seemed friendly enough, and without having interacted with any other being, or experienced fear or familiarity, I had nothing to compare it to. I sat, studying it as it appeared.

“Where am I?” I asked, not quite sure what language I used, or even if I used a language to speak.

“Don’t worry about that.” The figure said, sifting through time and space to find an available identity for me. “Right now, you’re nowhere. But in just a minute, you’ll be somewhere.”

Places and people swept around us, whipping past us and blurring together into an ocean of identities. I stood from my chair, in awe.

“Let’s see.” It said, sorting through images and scenes as they flew around us. “This one looks pretty good. What do you think?”

“What is it?” I asked, still dizzy with my recent creation.

“Well, this identity is a female, parents are Irish and English, and you’ll be born 1933 in North America, in New York City. Don’t worry about those details though. Whatever we assign you, you’ll be in the right place.”

I studied the identity. Thousands of other faces swirled around us, forming a tapestry of colors, shapes, and noises.

“How could I decide?”

The figure made a noise like a laugh. “You can’t. You’re a blank slate right now- No identity, no name, no background, no assumptions, expectations, predispositions, inclinations, or nationality. How could you make a decision without any of those?”

I walked further into the maze of identities, looking at all of the faces that I could be.

“But don’t worry.” It said. “Soon enough, you’ll have all of those things. You’ll be able to make a decision in a snap.”

The voice fell silent for several seconds, and I opened my mouth to ask again, but it answered, confidently, before I could.

“See how they all weave together, seamlessly?” It said. I nodded. “That’s what they’re for. Each intersecting identity creates a knot on the other identities, and affects another decision further on down the line. See that one?”

One of the identities lit up. It was a vibrant strand of people, places, voices, thoughts, and ideas, all coiled up into an intricate swirl of life.

“That one is awesome. It’s connected and tied to so many other ones. In fact, I’ve hardly seen any other one like this. Incredible.”

The identity veered closer and all of the intricate, seamless ties became tiny interactions and decisions, complex and beautifully crafted. At the beginning of the thread, a brutally dark splotch marred the woven cords of circumstances.

“That? Rough times. I don’t know. Something dark and uncomfortable.”

I turned my eyes upward, along the future of the thread of identity. It grew bright and alive, weaving in and out of thousands of other strands, spreading light as it went.

“You’ll find out when you get down there. Now close your eyes.”

I shut my eyes and felt myself simultaneously draining like a bathtub and filling like a water balloon, then shattering like a mirror (None of which I actually knew of). I heard everything at once – Every voice, scream, laugh, cry, whisper, yell and giggle, as loudly and as softly as I could. Then I heard nothing.

I opened my eyes.

And breathed in for the first time.