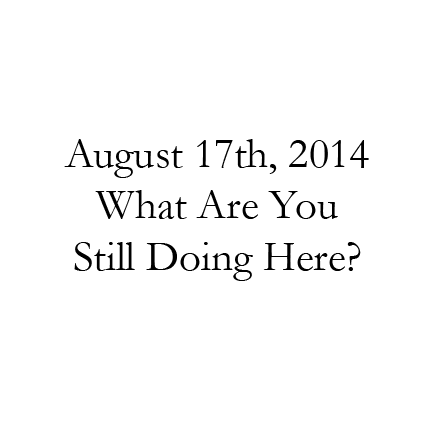 “What are you still doing here?”

The lights were off; all of the coworkers had gone home. The kitchen was empty; all the chairs were pushed in under their desks. Even the quiet janitor, Arri, had finished cleaning and gone home. But in one dark corner of the office lobby, Christopher sat working at his laptop. He looked up at the questioner whom had broken the silence.

A man, mid 40’s, lean, greying in a stylish way, with sharp features and defined cheekbones, stood near the lobby exit. Christopher had seen him before, but couldn’t quite remember…

“Oh. I’m finishing a project before I head home.”

The man looked at his watch, almost theatrically.

“Yeah.” Christopher tried to act like he was surprised, but he wasn’t. It felt like 11pm, and he still had a couple of hours of work to do.

“What are you working on?”

Christopher tried to shrug off the question, or at least make his project seem uninteresting.

The man smiled, his genuine curiosity posing a harsh contrast to his words. But Christopher could tell he meant well.

“Well, the office keeps me a little bit more focused, so…”

The man moved toward the exit.

“What are you doing here?”

The man turned back.

“Company deadline. And a call with our Asia team. But I’m going home now.”

“You’re Stephen Eisner. I don’t know why I didn’t realize it. I saw you talk at the CEO company address last May.”

He started to stand and make himself a bit more presentable, but Stephen shook his head and waved for Christopher to sit back down.

“Wow, honored to actually meet you, sir. I’ve read all of your books, and can’t wait for the one you’re releasing this fall.”

Stephen gave Christopher the opportunity to fill the silence, once again, but Christopher hesitated, so Stephen filled the gap.

“Oh…” Christopher started, then hesitated, realizing he started far too many sentences with ‘Oh’. “I’m working on a photography publication. I’ve been taking series of portraits, and I’m working to get them published by the end of the year. But I have a revision due on one of the portrait series tomorrow, because it’s up for sponsorship.”

“Thanks. I will. Any words of wisdom?”

Stephen smiled, and turned toward the door.