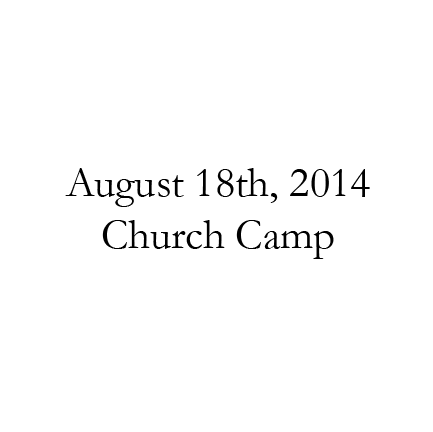 Summer camp always brought me a rush of mixed emotions, usually negative. Spending a week in the middle of the mountains of South Carolina with other kids who were often so very different than I was not particularly enticing. However, this was not just any kind of camp.

This was church camp.

Church camp was almost mandatory for my siblings and me. All of my older brothers had attended, and my sisters were starting to join the ranks. It was nearly a rite of passage. Proof that you had insight and experience into spiritual matters. My siblings always came back with stories of deep spiritual growth, waterslides, paddleboats, and shaving cream fights.

At the forefront of these Summer Camps was the Youth Minister, Manny. Manny’s large, open friendliness was rivaled only by his size and his goofy smile. But somehow, Manny had the inherent ability to silence the humorous side of his personality and exclusively channel a grave and serious counselor.

Manny’s reputation preceded him, and when I finally met him on the first day of summer camp, I’d already heard my siblings tell dozens of stories. Stories about how Manny had put pickles in one of the kids’ bed as a practical joke, or how he’d convinced all the boys in the cabin to play along and act like zombies when another kid came into the room. Inevitably, though, the story would end with Manny becoming a spiritual mentor by the end of the night, leading kids out of bad relationships, petty drugs, or bad habits.

All of these stories struck me as entertaining and amusing, but never a portrait of reality. I knew lots of high school kids, and none of them were held captive by any of these vices. All of my siblings were in high school, as well as all of their friends, and none of them had ever had stories of bad relationships, or cigarettes, or speeding tickets, or the like. One of my brother’s best friends, an easy-going guy named Cliff, practically lived over at my house, and exemplified (to me, at least) the average high school guy: Friendly, amicable, with leadership skills, and a habit of making people laugh. Cliff had become something of a leader in the youth group, and even though I could barely call myself old enough to be a member, I knew that Cliff was someone to look up to.

So after I had denied all of my siblings’ wishes to join them at summer camp, my brother sent Cliff to try to convince me to come. The next day, I was signed up and packed, ready to visit that remote get away in the mountains of South Carolina. During the first hour of the van ride, I was certain that I’d made a mistake.
But the week continued. I slowly grew accustomed to sharing a cabin with a dozen or so high school guys, and to the extreme diet of camp food and cabin snacks. During the first two days, I learned more about sex, curse words, and video games than I had ever cared to know.

But that’s almost the point of summer camp, isn’t it?

The camp wasn’t entirely for the purpose of secular education. Every day we were drawn into outdoor activities, like rock climbing or zip lining or horse riding, all made increasingly uncomfortable and awkward by the humid summer heat. My brothers and Cliff showed me how to rappel, and let me join their soccer team, even though I was the youngest player, and the shortest by at least a foot.

But the events that I anticipated the most were waiting at the end of the day. After the culinary obstacle course of camp cafeteria food for dinner, the tired and weary group of high school kids and I gathered into the large multi-purpose room for “chapel”. And that was what I was interested in.

I wanted to know if they were true, all of the things that my siblings had told me. Manny praying in tongues, high school kids crying and revealing their secret hurts, or kids announcing that they were shifting the focus of their life toward missions.

The first night of chapel touched and hinted on these things, but only supported my suspicion that nobody in this group of high schoolers had ever struggled or dealt with real drugs, real sex or real vices of this nature. This was church camp, after all, and all of these kids were sent to church camp because they weren’t in the middle of struggling with these things.

So the week went on, and I continued learning all sorts of new things: How to play poker, how to say curse words in Spanish, the best way to cover someone in shaving cream, the best practical jokes to play in the middle of the night. Every day, we’d brave the mysterious unknowns of the cafeteria, jump tirelessly from canoeing to the ropes course, and end up in the “chapel” after dinner.

By the final night, my hypothesis was proven correct: My siblings had greatly exaggerated the intensity of chapel and of the spiritual revivals in any of the high school kids. It was true that there were a couple of kids who asked for prayer regarding ‘difficult times’, but none of them expressed any serious, life threatening concerns.

The final evening of chapel ended in a time of testimonies: Short stories about some of the campers’ spiritual experiences during the week. My sister kicked off the testimonies, explaining how she felt so much closer to God, and how she’d made so many new friends. Another camper stood up and echoed my sister’s experience. Then another, and another, and another. One student stood and revealed that they were having a difficult time in life, but through their time this week, they were able to move forward.

Despite the cheerful testimonies, Manny remained solemn. As the group quieted down, sensing that the Chapel meeting was coming to an end, Manny surveyed the group of young, eager teenagers. Finally, Manny broke the silence.

The room fell to a dead silence. I felt a lump in the back of my throat from the serious shift in tone. I shifted my eyes around the room, wondering who could be dealing with those kinds of things. Manny continued:

He paused. Cliff stood up, his face wet with tears. I turned in shock, along with most of the group, almost ashamed to watch him as he cried.

He started to mutter about struggling with sin. He said something about pornography, and how he was addicted to it, but his sobs obscured his voice, and his words were lost in the tears. Manny stepped over to him and put his arm around him, trying to alleviate Cliff’s anxiety.

The room fell to an uneasy silence, as the volume in my mind raced to an uncomfortable level.

“We often feel that confessing and talking about the sins in our life is a sign of weakness. But it’s actually the strongest thing you can do.”

My heart, or my stomach (I’m not sure which), churned and rolled with nervousness. My mind raced to try to understand what had just happened before my eyes: My brother’s best friend had just publicly confessed to being addicted to one of the most taboo activities that could be whispered or joked about at Church Camp.

As I sat watching one of my role model’s cry, I wasn’t sure if I should feel sadness, or happiness, or unease, or comfort. It was a terrifying notion, that there was no inherent protection from anything, whether or not you were the “Church Camp” type, or the “Role Model” type, or the “Friendly teen”, or the funny older brother. A rush of mixed emotions coursed through me.