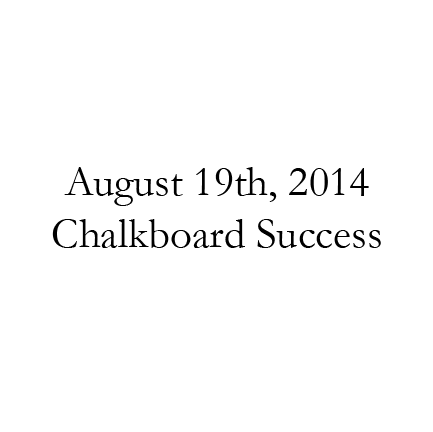 I work downtown in an office shared by a number of different companies, each one being pulled up the hill of fortune and fame by their tireless and fearless CEO. Right in the front of the office lobby, there’s a large chalkboard that says: “Share your successes!”

Each week, I enter the office to find a new variety of business milestones plastered across the board. Things like: “We raised a 5 million dollar seed round of funding!” or “We were on CNN!” or “We closed a 10 million dollar deal!”

After 16 and a half weeks of walking into the office and seeing the enormity of the success stories around me, I decided I wanted to share my own success with the world. So I grabbed a piece of chalk and wrote:

“I’m alive!” declaring the joy of my existence to the world. The office secretary, Alexis, noticed me writing on the chalkboard, and asked me to erase it. “It’s for business successes,” She told me, as she took the chalk from my fingers and erased my existential announcement

So I nodded, and left the lobby, headed toward my office suite. I had a good, productive day at work, but I couldn’t shake what she’d said to me. It confused me, and made me realize that I don’t really know what success actually is, or if it is anything at all.

One of the things that I hear separates successful people from unsuccessful people is that successful people stay at the office on average forty-seven minutes longer than unsuccessful people. So I decided I’d try it. As 5 o’clock rolled around, I watched some employees from some of the companies in the shared office space start to pack up and head toward the door. I, on the other hand, stuck around and got some extra work done. Even my boss passed by my office and gave me a curious nod as he left.

Twenty-nine minutes into the forty-seven, I had already hit a block and became distracted and lazy, counting the minutes until I could leave. I scrolled through Facebook and twitter and my personal email, and then looked up to discover only 2 minutes had passed since I last checked.

Finally, I stumbled onto something worth reading: An article titled: “7 things that successful people do”. I was sure that one of them would be stay at work forty-seven minutes later than normal, but it wasn’t listed. Instead, the article listed mundane things like “Exercise”, or “Practice Clear Communication”. I got out a notebook and jotted each of them down, making a checklist for the next day.

My forty-seven minutes were up, and I fled the office, rushing onto the bus and back to my neighborhood. The next day, I put my checklist into practice. By the next week, I checked each item off of the list for seven days in a row. I was sure that I was a success.

So when I got to the office the next morning, I grabbed a piece of chalk and wrote “Exercised for seven days in a row!” up on the board. Alexis was not impressed, and threatened to talk to my employer.

This only confused me even further, because I thought that I’d found a sure-fire way to become successful.

That afternoon, I stayed late at the office once again. After 36 minutes, I found myself scrolling through Facebook, once again; only this time it was a quote that caught my eye, and not an article. It read:

“A man is a success if he wakes up in the morning and goes to bed at night and in between does what he wants to do.”

It seemed far too easy. There were no 7 steps, or 3 key elements, or 12 immutable laws to follow.

So with forty minutes left, seven away from being a successful person, I stood up, packed up my office, and left my suite. I stopped in the lobby, wrote: “I quit!” on the success chalkboard, and left.