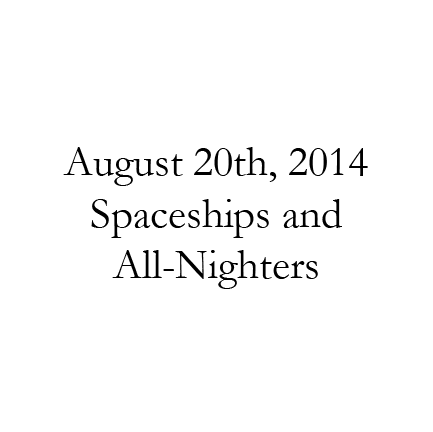 I pulled my first all-nighter at the tender age of eleven. I often wonder if I’ll go senile in my old age because of it, but even if I do, it’s still worth it. Unlike the other all-nighters I’ve pulled in my glorious career (College Finals week, freshman year, sophomore year, junior year, and––forget senior year), my first all-nighter was different, because I still remember the date.

Every year, my mother’s birthday created a momentous occasion on the calendar, with anticipation bleeding into the preceding weeks (when I got older, I realized this phenomenon occurred due to my mother’s healthy love of attention). My father, on the other hand, treated his birthday like a dentist appointment: the only reason it was on the calendar was because he might forget it if it wasn’t.

Because my mother’s birthday came with several weeks of warning, I never struggled to find a present for her. Most ten or eleven-year-olds bring their parents a cheap arts-and-crafts school project made with popsicle sticks and Crayola markers, wrapped like a box of diamonds. (These presents are usually kept out of obligation for several days, until they are thrown away by all but the raging sentimentalist.) But because my father’s birthday crept up on us like a ninja, I was often left scrambling to pull together a popsicle-stick birdhouse or some other project that straddled the line between abominable and cute.

So, on my mother’s birthday, I followed the common tradition of bringing home a school craft project, and delivering it in a horrendous arrangement of wrapping paper. And for some reason, something about that strangely arranged Martian diorama made my father jealous.

“Why don’t you ever make something like that for me?” he joked––only when you’re eleven years old, you don’t always understand that it is a joke.

“I will!” I promised eagerly. “I’ll make you something even better for your birthday!”

My mother held up the Martian landscape, crafted from clay and pipe cleaners and twigs. A raw, genuine laugh lifted from her smile.

“Better than this?” she played along. “There’s no way.”

“Yes-way!” I pushed back. “Dad’s planet will be awesome.”

A month later, I’d all but forgotten about my boast to craft an intricate intergalactic diorama for my dad. And I wasn’t reminded of it until the eve of my father’s birthday, when I climbed into bed, happened to glance out my window, and spotted a shooting star. My mind wandered to outer space and spaceships, aliens and asteroid belts, until I remembered that the next day was my dad’s birthday, and I’d promised him a superb alien landscape.

I crept out of bed, plagued by a rush of heightened worry and fast-approaching deadlines. I raced quietly to the closet in the spare room, where my mother housed all of our rainy-day craft supplies: Play-Doh, pom-poms, googly eyes and pipe cleaners, finger paint, duct tape, glue sticks and construction paper––the eleven-year-old kid’s equivalent of Home Depot. I got to work immediately, bleary-eyed and delirious.

It was 11:31 when I started. At 4:03 a.m., I realized that I might not finish before I had to go to school the next morning. My parents woke up at 6:15, and I heard the coffee maker brewing. When I heard footsteps climbing the stairs to my room, I froze instantly, as if I could camouflage myself in the jungle of sprawling art supplies that had spread across my room.

My dad poked his head in the door, still drowsy-eyed and unshaven, looking much like an alien that might have appeared in the half-finished diorama I held in my hands. When my dad peered into my room, ruining the element of surprise, my self-imposed fatigue and exhaustion erupted and I burst into tears.

“What are you doing?” my pre-caffeinated father asked me in his calm, somber tone of voice.

I tried to answer, through a flood of sobs and tears, but only sounded much like what I imagine an alien might sound like. My dad sat on the ground beside me and lifted the diorama in his hands. He mustered an empathetic smile.

He studied it as the tears continued to pour from my eyes and down my cheeks.

“It was supposed to be a team of alien scouts on an explore mission from the planet Zourgrabs. But I didn’t even have time to finish their spaceship.”

He put his arm around me.

“Don’t tell her I said this,” he started, his voice still gravelly from the early morning, “but this is better than mom’s.”

He smiled. And that smile was enough to make my first all-nighter worthwhile.