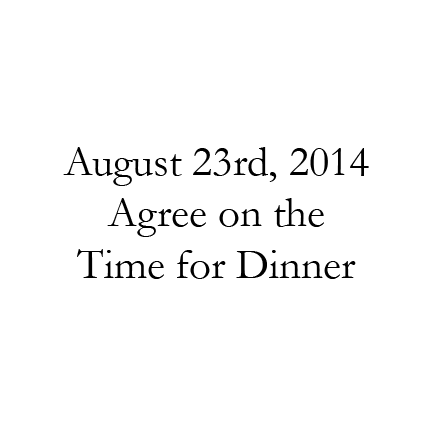 As Stephen entered Michael’s home, the house enveloped him as if it were a creature swallowing him whole. The warm aroma of a rich dinner surrounded him, giving evidence of Alice’s skillful hospitality. Michael extended his hand.

“Good to see you, Steve, glad you could make it!”

“Thanks for having me.”

“Of course.” Michael motioned for Stephen to follow him into the kitchen, and continued: “Alice is nearly done with dinner, so we can get started eating in just a few minutes.”

“Great,” Stephen answered. His eyes wandered across the recently remodeled kitchen, with its marble countertops and rare hardwood cabinets, its large stainless steel refrigerator and stone furnace oven. The luxurious environment struck him, boldly. But something wasn’t right about it, and he couldn’t tell what it was.

“I’ve got to step out momentarily, but Alice will be here in just a second to check on the food. I’ll be right back.” Michael shifted, smiling in an almost creepy fashion, then excused himself from the lavish kitchen.

Stephen nodded uncomfortably, and unsuccessfully tried to find a place to stand in the kitchen without seeming out of place. The kitchen was undoubtedly beautiful, perhaps one of the most beautiful he’d ever seen. And yet, something was wrong. He couldn’t quite place it.

“You must be Stephen.” He turned to see Alice. She was almost as he’d pictured her, but more beautiful, less aged, with a smooth edge of sophistication in the way she moved.

“Likewise. Where did Michael run off to?”

Stephen looked around, as if he’d be able to see Michael from where he was.

She smiled, and took dinner out of the oven. The fragrance wafted across the lavish dining room.

“Take a seat, I’ll bring the food over,” she said.

He sat down, uncertain and insecure, and she brought two plates of food to the table.

“You have a very nice kitchen,” Stephen said, trying to dig up small fragments of conversation in the hopes of striking something valuable. “How long has it been since you remodeled it?”

She smiled again, and Stephen realized there was something about her smile that disconcerted him as well–something artificial. His eyes wandered around the dining room, to the kitchen, once again.

“We remodel whenever it needs it,” she said, in between bites of pasta. “Whenever we feel like it, really.”

Stephen’s eyes snapped to attention, and he finally realized what it was:

“The clock!” He declared excitedly, almost standing. “The time on the clock is two hours behind!”

He noticed that Alice was unimpressed and unamused by his humble correction.

“Isn’t life easier when you set the time of day that you want it to be?”

“I don’t know that I…” He stumbled to answer. “that I would agree. I mean, no matter what you set the time as, it doesn’t change the time.”

“Michael, what did we agree on before this dinner?”

“You heard what I said.”

“What other clocks do you have in this house that aren’t right? And where did Michael go?”

She snapped, and stood up.

“If you’re not going to pretend anymore, than neither will I.”

She left the table, grabbed the keys, got in the car and drove the car away, leaving Michael alone in the house by himself.