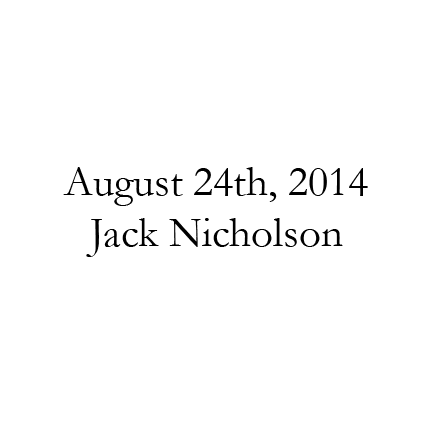 Every time a car drove past my apartment, my dog, a pudgy black lab named Jack Nicholson, would unleash a furious two-minute barking tirade. Every time a jogger ran by, or an elderly couple waddled past our window, he would unleash yet another two-minute barking tirade. It didn’t matter if it was three p.m. or three a.m. If any car, truck, jogger, or pedestrian was within fifty yards of our apartment, Jack Nicholson made sure I knew it.

The worst was when he couldn’t see them and could only hear them. This drove him around my small apartment like a psychotic animal, and made me wonder if he’d picked up some bad habits from watching ‘One Flew Over The Cuckoo’s Nest’ with me one too many times. He watched the entire film so intently, as if he understood every bit of it, appreciating his namesake. Several days after that, I came close to slipping sleeping pills into his dog food, just to get a couple of hours of quiet. But I concluded that would probably not be healthy for a canine to consume.

The neighbors hated him, and my dad never liked Jack Nicholson, (the actor, or the dog). And yet, every day when I got back from work, I harbored a kind of hidden gratitude at his happiness to see me. His smile and his notoriously angry, barking tirade were the only things about him that actually resembled his namesake. His smile had an uncanny similarity to the deep-grinning actor, in a way that could either creep you out or make you feel warm and welcome. I’d come home every day and see that Jack Nicholson grin, greeting me at the door.

But one day, he was gone.

I returned home later than usual, my arms filled with groceries, film equipment and books on French New Wave cinema. I unlocked the door, immediately realizing the lack of a hyperactive Labrador at my feet. I put the groceries down, and checked the apartment.

There were no open doors, no unlocked windows that he could reach. I triple-checked the house, then scrambled over to the next-door neighbor and rapped on his door.

“Yes?” the old curmudgeon of a man answered.

“Hi. Um, I live in the apartment next door, and I was just wondering if you’d seen my dog anywhere nearby.”

The man rubbed his eyes.

“Oh. So he’s the little bugger that barks all the time and wakes me up.”

“Have you seen him?”

The man rubbed his eyes again.

He stepped back inside.

I knocked on some other neighbors’ doors, with strikingly similar results. Finally, I took to the streets, shaking dog treats in my hand, whistling and yelling like I came straight from the Cuckoo’s Nest. I walked down Cherry Street, to the park we sometimes visited, but he wasn’t there. I checked the back alleyways, where the dumpsters carry a pungent odor that might attract a loose dog, but he wasn’t there either.

After several hours, I grew desperate, and started yelling his name up and down every single street in downtown Winston-Salem. Every once in a while, someone poked their head out of a door or a window to see why the hell someone was yelling Jack Nicholson’s name, but they were never able to offer any help.

It started to rain. The sky grew dark, and pushed the last glimpse of sunlight away, extinguishing it until the next morning. I walked back to my apartment, defeated.

At the end of that fucking ‘Cuckoo’s Nest’ movie, every single time we watched it, my dog started barking as if a car or a jogger had gone by, but he was glued to the screen. I still don’t know what happened to my dog. Maybe he planned it all while watching that movie with me over and over again, because Jack Nicholson never came back.