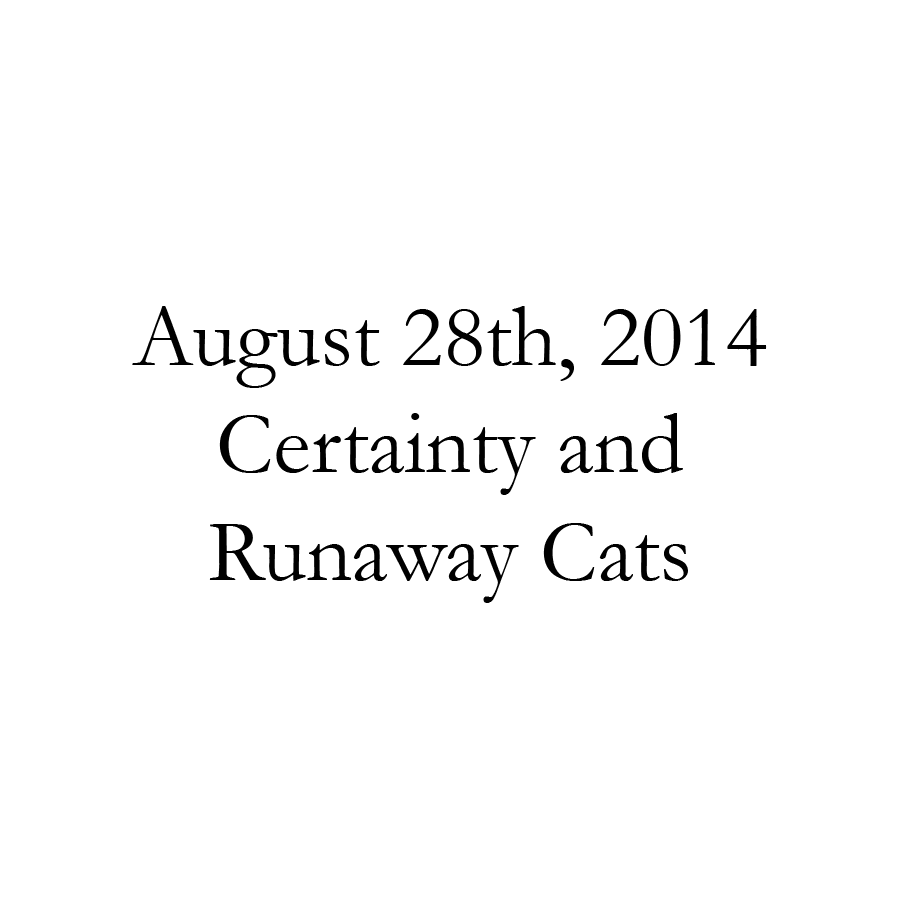 A friend of mine told me about a place where uncertainty doesn’t exist.

“Just down the road, and to the left,” he said. I took his word for it, and walked down the road to see if this place was real. I had my doubts, but I had to take the chance and find out for myself.

I walked down the street and to the left, past Twenty-seventh Street and that bakery I always say I love, but never actually go into. I looked around the building, circling the block like I was looking for a secret door, but in reality, I was only looking for some illusory sense of certainty.

But I’m not one to be easily obstructed, so I ducked into a key-making shop––one of those places the size of a closet––and asked for directions.

“No uncertainty?” The large, scruffy man said, anxiously rubbing his neck. “Yeah, I think there’s a place like that past Thirty-sixth Street, west on Tryon.”

I thanked him, and darted out the door.

I walked up past Thirty-sixth Street, but only found a boarded-up old building that might’ve been the place, a long time ago. I peeked inside one of the grimy, cracked windowpanes; the space was filled with cloth-covered furniture and dusty carpets.

An old woman noticed me peeking into the dilapidated shell of a building, and paused to watch me. I turned to her, and she spoke up, in a gentle voice like a squeaky hidden door:

“You’re looking for that old certainty place, aren’t you?” she asked.

“Because they shut down a long time ago. Besides, they wouldn’t have what you need anyway.”

I wasn’t sure how to respond to this little old lady, so I jumbled some words together and asked her, “Is there any other place like it?”

But she just shook her head and kept on walking. I turned back to the old building, and noticed a sign that said, “We’ve moved to Forty-eighth Street.”

I kept on walking, past Thirty-seventh and Thirty-eighth, all the way to Forty-eighth. I stopped and glanced down every side street, like I was looking for a lost cat. I used to believe that every cat was a lost cat. Since cats don’t really care if you know where they are or not, how could they really be lost? Finally, I reached Forty-eighth Street. A large warehouse, lodged between a modern hotel and a modern apartment development, struggling to keep up with the times. I poked my head inside and spotted a thin man, dressed cleanly in black, sitting at a desk among a large, open expanse. Water dripped from the ceiling.

“But it’s not uncertain,” he said. “Not a drop of uncertainty here.”

I looked around the hollow warehouse, as if that hidden door was camouflaged into the wall, waiting for me to find it. The only thing I was certain about was that even if I’d taken every key from that fucking key-making closet, not one of them would have opened the hidden door.

I waited, in case he was going to add a “just kidding” to the end of his sentence. But he didn’t.

I walked the twenty-two blocks back to my apartment. If certainty was a runaway cat, I started hoping to God that I was wrong about runaway cats, and that they actually did care about whether or not I knew where they went.