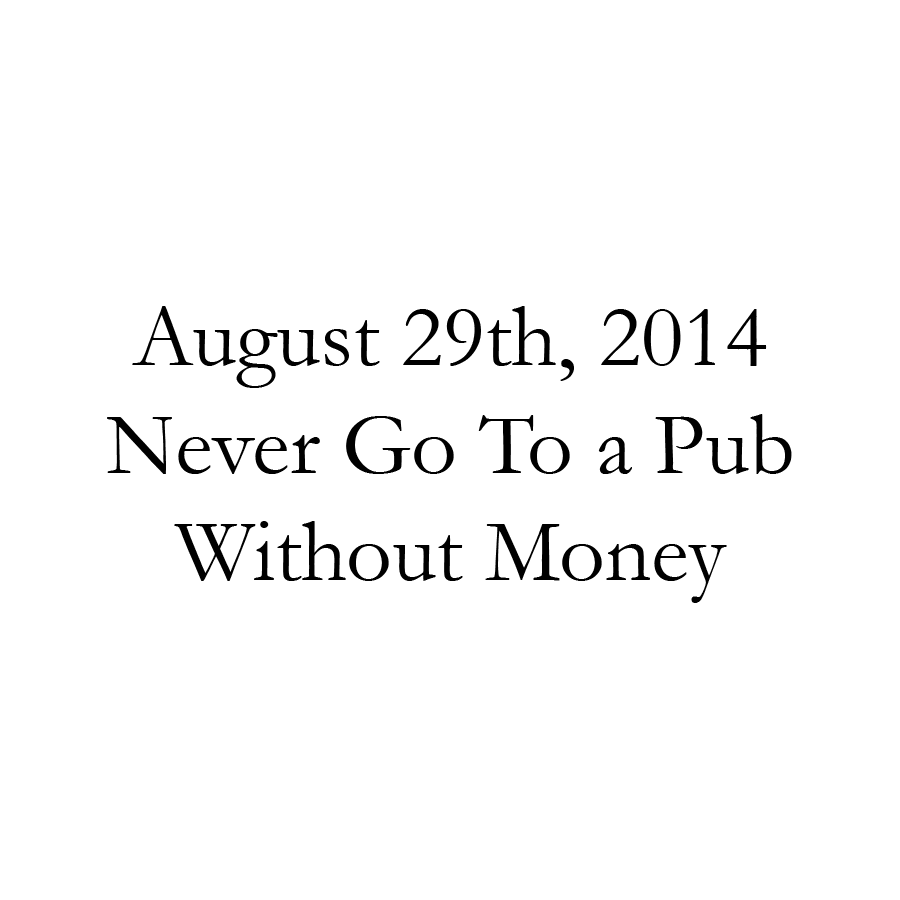 Peter only ever waited by the door of the bar when he was nervous. He had no reason to be nervous tonight, but instinct drew him to the front of the bar, where he would be able to see his son approaching, from any direction.

He ordered a beer, but they knew him well enough to bring him two. He never drank alone, or with a crowd. They knew that by now. Several other customers sitting deeper in the bar promptly finished their drinks, paid their tabs, and entered the rainy cobblestone streets of Prague.

Peter couldn’t restrain the swell of images that rushed through his head: he had always thought there would be some kind of distinct separation between their ages, like a line of chalk on the street, one for each year. But the older he got, the more they blurred, and time drew them less distinctly, until he could hardly distinguish how much time had passed since his son turned twelve.

He passed his son one of the pints of beer.

His son sat down, wiped the hot evening sweat from his forehead, and took a long sip from the glass.

“Do they not give you anything to drink?” Peter joked.

His son didn’t smile. He rarely smiled. As far back as Peter could remember his son rarely smiled. It was as if he’d enlisted with them because of it.

Peter wrung his hands, realizing he had only a couple minutes remaining. Two minutes, maybe three, if his son was strong. He tightened his grip around his own fingers.

Nobody smiled in Prague anymore––there was a black cloud that hung over the people’s hearts and faces as they walked to work, or to school, or to the pub. Maybe, just maybe, his son would smile one last time before the two minutes were over. He pulled out the envelope and slid it across the table, wiping it through the puddle of condensation from the pint of once-cold beer.

His son didn’t say anything. He just took the envelope, opened it, and counted the money.

“They’d shoot me if they knew I was doing this.” His son’s words sliced through the muffled din of the bar.

Peter lowered his gaze, but nodded, slowly and shamefully. His son was not going to smile, no matter how much he hoped for it. Two minutes was not enough time. His focus drifted away from the beer, away from the money, away from the information that his son had promised to deliver, away from the Reich, away from the secrets, away from sitting at the front of the bar. He dug frantically in his mind, searching for his last memory of his son’s smile.

His son placed a large envelope on the only dry spot on the table. Peter picked it up immediately, and opened it. His eyes scanned the page.

They were genuine. He knew they were genuine, even though tears started to blur his vision, far past his ability to read clearly. His son never would have delivered something that wasn’t genuine.

Slowly, his eyes dripped with regret, and formed large splotches on the envelope that his son had kept dry.

“Is it all here?” Peter asked, trying to muffle his tears, as if he was coughing, or sneezing. His son looked at him, suspiciously.

Less than a minute now. Peter looked up at his son one more time. He’d never see him smile again. Each line of chalk that separated all those years from each other began to wash together with his tears and the rain. He wanted to grab his son and ask him why he’d joined them, why he’d left the family, why he’d cheated them. He wanted to plead with him to smile one more time. But instead, he just cried, and thought about all of the times when he could have been a better father.

He looked up. His son turned white, and started coughing. Peter’s vision blurred and flooded, and his son collapsed. He jumped out of his chair, cradling his son in his arms.

His son convulsed, gently, and grimaced.

His son’s breathing quickened, and then slowed. His face hardened to steel, and Peter glimpsed the hint of rebellion that lay under his son’s skin like a splinter.

His voice was naked, pieced together like a torn curtain.

Peter let his son rest on the damp stone floor of the pub, and let his tears drop to the ground like rain on cobblestone, blurring the lines of chalk until they ran together, void and indistinct.