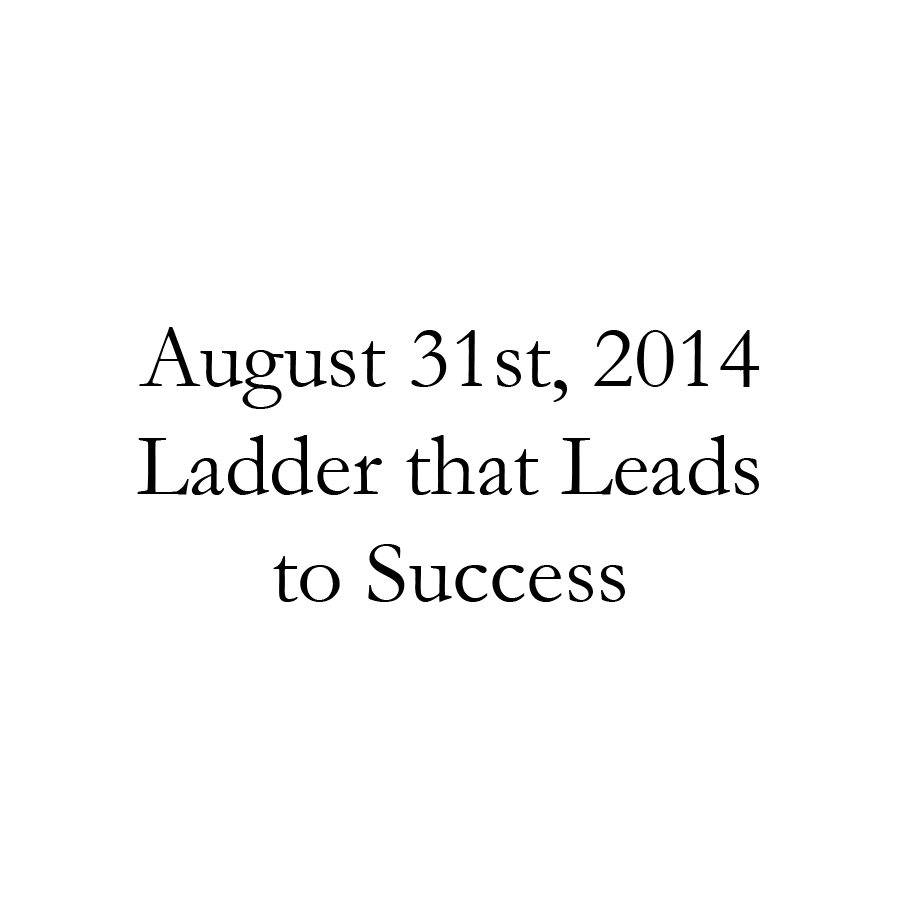 There’s a ladder that leads to success, or at least, that’s what I’ve been told. To be honest, I haven’t actually been told this. It’s just that everyone around me is climbing the ladder, too, and they all say they’re headed for success, so that must be where it’s going.

It’s not very wide, and I struggle to stay balanced. Before I started climbing, I read about safety regulations limiting the ladder to one person at a time. So when I showed up and saw the ladder swamped with hordes of climbers, I turned to the guy next to me and asked him:

“What about the one person limit?”

“The what?” He looked at me, confused.

“The one person limit. You know, one person on the ladder at a time?”

He just laughed and jumped on the ladder, which was swaying dangerously under the weight of the crowd.

So many people had told me about the ladder. My dad, my mom, my grandparents. My uncle, a successful banker in South Carolina, mentions it almost every time I see him, and my cousin, a website developer in Los Angeles, talks about it all the time.

I shifted, nervously, and grabbed the railing. Behind me, hundreds of climbers yelled at me to hurry up, and so I stepped up and started to climb.

It was terrifying. I was swept into the steady stream of climbers as it violently pushed its way upward, faster and faster. I paused for just a moment, to catch my breath.

I looked down to see a furious man, red in the face, wearing a pressed white shirt with a blue tie. He carried a briefcase in one hand and clutched the ladder with the other.

“Well, catch your breath in someone else’s way!” he yelled, and crawled past me awkwardly. The man behind him seized the opportunity to follow, and pushed past me, along with the woman behind him and the man behind her. I slipped off the rung and fell onto the scaffold.

I stood cautiously, brushed myself off, and looked back at the ladder, expecting to see the crowd of climbers at least notice that someone had fallen. But nobody stopped––they all just kept climbing and pushing.

“Are you alright?” I heard a tender voice say behind me. I turned to see an old man, his eyes struggling between unforgiving experience and authentic kindness.

“Um. Yeah,” I said, trying to seem like I not only knew what I was doing, but that I was about to jump back on and keep doing it.

“You look a bit confused.” He smiled.

“Well,” I started to tell him that I was, but instead, my words formed a question:

“Do you know where this ladder goes?”

“To success,” the man answered, like I’d asked him the answer to one plus one. I hesitated.

“I wouldn’t want to spoil the surprise,” he said, looking down the ladder and preparing to descend.

I looked up. The top of the ladder disappeared into the distance, obscured by clouds and mobs of climbers.

“I got really lucky,” the man said. “Found a ladder that nobody had used before. Happened to lead to the top.”

“Is the view really as great as everyone says it is?”

The man stepped onto the descending ladder and climbed down a few rungs.

“Yeah. The view is great. If you’re not afraid of heights, and if the weather is nice on the day you’re up there. But that’s it. It’s just a view. You still have to figure things out. And it gets pretty crowded up there, too.”

I watched as he disappeared toward the scaffolding below. Ten rungs. Twenty rungs. Thirty, forty, fifty, sixty.

I looked back up at the swarm of people climbing the ladder to that place called Success that everyone talked about.

I turned to see a chipper man, pressed and proper, with a sheen so clean and perfect that he couldn’t have been anything but a salesman.

“I can get you a spot thirty rungs higher in just sixty seconds. Think of how much further ahead you could be!”

His words seemed foreign to me, and I just stood there, puzzling at the monstrous ladder in front of me. Each minute, hundreds of people put one hand in front of another and climbed the ladder, rung by rung, step by step. Every once in a while, somebody stepped off, onto the scaffolding, but hopped back on before they could catch their breath.

The salesman leaned toward me, making sure I was conscious and awake. I shook the overpopulated ladder from my mind, and turned back to him.