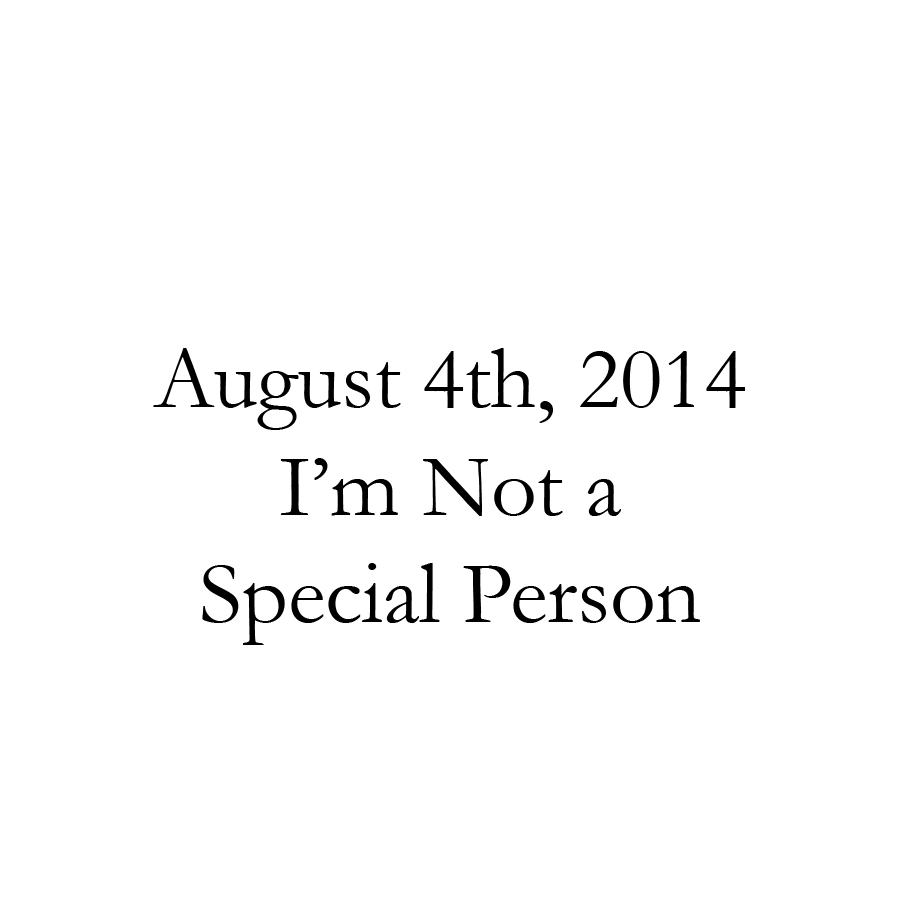 I’m not a special person. I know a number of people that are more motivated, more hardworking, more intelligent, more strategic, and more fun than I am. Take my co-worker, Driscoll.

Driscoll gets up every morning at 6 am to go for a morning workout. Me? I went for a run last Saturday after sleeping in until 12:30. Driscoll stays an extra hour at the office. Me? I’m usually out the door by 4:50. Driscoll went to Princeton, and graduated with a Magna Cum Laude in Economics and International Affairs. Me? I went to a South Carolina State school and graduated in four and a half years, because, well, I might have failed a class. Or two. Driscoll also regularly meets his friends (And by friends, I mean very good looking females) for drinks on Friday nights and Saturday nights, and sometimes Sunday nights. Me? The last time I talked to a girl was a week ago, and she was my mother.

It’s not that I’m lazy. Or dull, or slow, or dumb. There’s just a kind of inherent drive that I’m lacking. I realized it when I was in a meeting last week at work. Our boss, Jerry, stood up, yelling and ranting about needing more innovative ideas for the Clemens contract. I stared at him as his face grew redder and tighter, until I was absolutely sure it would burst. He spoke faster and faster until his words shot out like a flood of bullets.

“Do any of you have ideas?” He asked.

There was one of those really awkward silences.

I didn’t. All I was thinking about was what I was going to eat for dinner when I got home in two hours, and that I should have worn my other socks today, because these socks actually had holes in them, but I didn’t discover that until I got to work.

“The real issue with this contract is that the overarching goal seems to be muddy – I’d like to propose that the true aim of the contract is to solidify Clemens role as a corporate institution that is dedicated to charity, community, and social good. If we phrase that as the mission statement, then we can scrap the side projects, like the Hands Up Program and the Withers Branch, which are really distractions.”

Driscoll spoke the sharp and bulleted words as if speaking was a competitive contact sport. The rest of us nodded our heads in agreement, and Jerry and Driscoll continued in a thunderous brainstorm, leaving the rest of us scrambling for cover to avoid the shower of ideas.

Later that afternoon, Driscoll poked his overenthusiastic face into my cubicle, giving me one of those smiles that was manufactured to get something from me.

“Glad to hear it. Say, I know you’re really good with animals and I-“

Hold it right there, just for a second. I’m not good with animals, and even if I was, I don’t know how Driscoll would know that. Okay, go ahead, Driscoll.

I thought about it for a moment.

“Where are you going?” I asked.

“Headed out for the vacation. It’s gotta happen sometime, you know.”

“Well, if you’re up for it, I’ll leave the key to my apartment on your desk on Monday morning, and you’ll be all set.”


I thought, at first, that when Driscoll referred to his dog as his Golden, he meant the breed. But the dog’s name was, in fact, ‘Golden’, but the dog wasn’t, in fact, a Golden Retriever. I was quite surprised to follow Driscoll into his apartment and find a tall, lean, greyhound.

“His food is in the cupboard over here.” Driscoll instructed, leading me into the kitchen. “One cup in the morning, one at night. Keeps him lean, you know.”

The dog jumped up and Driscoll caught it’s paws in his hands.

He turned to me and let the dog scamper away.

“Comes from finest bred line in the city. Dog that won the Derby last year is his cousin!”

Driscoll went on, spouting out more information about Dog races and greyhounds than I could ever want to know, then led me back out of the apartment.

The next week, I went about my day almost as usual, except for having to hurry to Driscoll’s place in the morning and back over to his place in the evening. Every night, I stepped into his apartment, feeling like some kind of indentured servant, wondering if I’d ever make enough money to afford this kind of apartment. Perhaps if I started treating everyday life like it was a competitive contact sport, waking up at 6 am every morning to run three miles, working late every day, and using words like they were strategic attacks, I might.

Driscoll returned the next week, and popped by my cubicle again.

“I really can’t thank you enough!” He chatted. “While I was gone I was just sure that you were keeping things under wraps.”

“Don’t mention it.” I said, and handed his key back to him.

“Just let me know if you need me to do the same for you when you’re on vacation!”

Two weeks later, on a Friday night, I stopped by Driscoll’s house around 9 o’clock, knowing he’d be out with his ‘Friends’ until late. I had a key in my pocket, or rather, a copy of Driscoll’s key, that I’d made two weeks prior. I took a look around, and unlocked the door.

I opened Golden’s kennel, and put him on a leash, and took him home. He’d grown quite accustomed to me while Driscoll was gone, and had no hesitation to following me back to my home. He curled up at the foot of my bed at night, and enjoyed tramping in my backyard in the morning before work.

When I got to the office, Driscoll darted to my cubicle.

“You haven’t seen Golden, have you?”

“He’s escaped, somehow. Without a trace. Quite mysterious, I don’t have the slightest idea of how he did it.”

That afternoon, ‘Lost Dog’ signs dotted our neighborhood, stating that the missing dog answered to the name of ‘Golden’, although the dog itself wasn’t golden, but rather, Grey. The sign also stated that there would be a fine reward for the person who found the dog, and so I led Golden back to Driscoll’s apartment, later one evening after work.

“Oh, goodness!” Driscoll cheered, “Where did you find him?”

“I saw him, wandering around Southrow Park, muddy and wet. I took him in and cleaned him up.” I said.

“I can’t thank you enough.” He said, grabbing the dog’s paws. “You’re a true friend, Keynes.”

We chatted for a while, about dog’s and neighborhood safety and missing pets. After a while, Driscoll stated it was nearing supper, and he had better feed Golden, after missing several days of food.

“Thank you again, old friend. It means a lot.” He said, turning to the door.

“You’re welcome.” I said, returning to the street.

I had no intention of ever treating life like a contact sport – That would be crude and dirty and opportunistic. I’m not an opportunistic person, nor am I intelligent, or special, or motivated, or strategic.

But I still had a copy of Driscoll’s key.