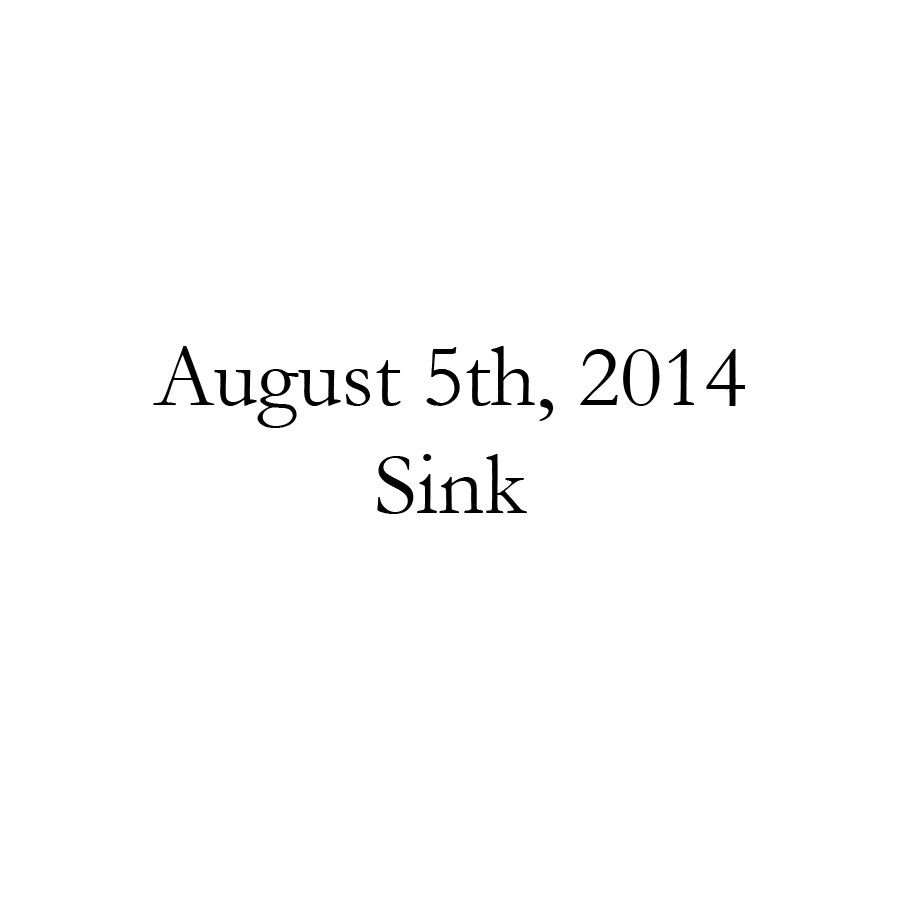 My guess is that there are other people that are sinking, too, but nobody knows it. Nobody goes to a show and tell announcing that they’re sinking. Or if they do, we think they’re a bit crazy. I don’t tell people that I feel like I’m sinking, because that’s not what 32-year-old men are supposed to do. A 32-year-old man is supposed to have a stable job, and a wife and maybe a kid or two. And a cat. They’re not supposed to be sinking.

And so I don’t tell anyone that I feel like I’m sinking. I don’t tell anyone that I feel like my work is about to swallow me whole and spit out my bones. Instead, when someone asks how I’m doing, I just smile, and nod, and say “Doing great.” And when someone asks how my work is going, I just smile, and say “It’s going great.” But really, it’s not. Every sale that I don’t close pulls me a little bit further down. And every time I go on a date with a beautiful woman I don’t know what to say, and the moment after I say goodbye pulls me down, too.

Eventually, I get pulled down deeper and deeper, until I can hardly see the sunlight, and the only things to keep me company are the freakish deep sea fish, with blind eyes the size of hub caps and spikes like porcupines. But I’m not supposed to tell anyone about them, so I stay down there with them, and start to wonder if I look as freakish to them as they do to me.

Riding the bus on the way home, I look at all of the faces around me. Is every single person here swimming on the surface, while I struggle underneath? What about that mother, sitting over there, with her hyper little boy who is dancing and punching the air like a superhero? Or that old man in the corner, who is sitting contentedly as though sitting were his life calling?

I have dinner with my friend, Anna Lise, and start to think that maybe she’ll pull me to the surface. She would, I think, if she knew that I was sinking. I’ve known her since high school, but she’s the kind of girl who hides behind her silliness when she doesn’t know what to say. And nobody knows what to say to someone who is sinking, so I don’t tell her.

The next afternoon, after a long day of poor sales calls, rejected emails, and a dissatisfied supervisor; I leave the office and get onto a bus. Not my bus. I’m not going to my apartment. I don’t even look at what bus it is – I want to run a chance of getting closer to the surface, rather than sinking deeper.

The bus takes me north, along Glenwood, and then cuts across on Trinity, near Trinity Park. The bus stops at the St. Mary’s, the furthest I’ve gone, and some passengers get off. An old man steps into the bus, shuffling next to me. He looks at me, with his eyelids that look like wrinkled t-shirts and knuckles that look like gnarled tree trunks. He looks at me, and I feel like I should say something.

There are fairly standard expectations for conversation: Exchange a greeting, ask how the other party is doing, inquire as to their affairs, ask them to expound about a comment that you don’t understand, talk about the weather, or a recent event, then perhaps, give a salutation and bid them farewell. Nobody is supposed to mention that they’re sinking. Nobody is supposed to talk about how far they’re sure they’ve fallen, or the freaky deep-sea creatures that they’ve seen.

I turn to the wrinkled old man, and tell him everything.

He nods, his wrinkled neck shaking slowly, like one of the deep-sea fish. He doesn’t say anything; he just looks me in the eyes in the same way that I look at the sunshine pouring through the surface of the water.

And without a word, I know that there’s someone else who knows what it’s like to sink.