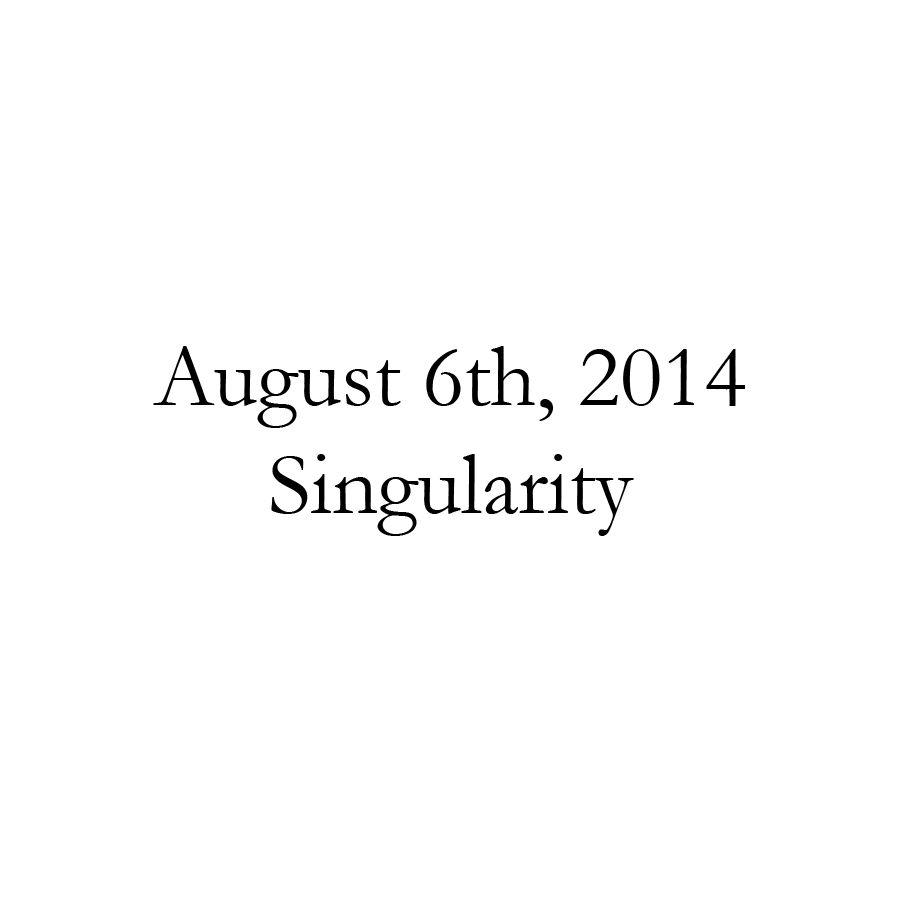 I’m waiting for my mother to wake up. I sit down beside her and take her hand in mine, but it doesn’t feel warm, or even alive. It doesn’t feel like her. But why would it? A pillow props her up and a machine pumps life into her, breathing for her, feeding her, emptying her. Why would a machine feel any different?

I want to stay and hold her hand until it grows warm and tightens around my hand, but I can’t. Too many things rest on my shoulders, too many people depend on me. At least, that’s what I hear, every single day. The only thing that I hear more than that is “Computers will never wake up.”

Singularity. Von Neumann called it that, and that’s what frightens me, because Von Neumann knew better than anyone else what it meant. I built the machine, and I still am trying to figure out what it might mean. But instead of trying to understand the machine, I spend all of my time building something that will eventually, and hopefully, be infinite. If we build it right, we’ll build something that we’ll never understand: A tower whose spire well have no way to reach.

“Computers will never wake up” I chuckle a little bit whenever I hear that, because I know it’s not true. I let go of my mother’s hand, kiss her cold, dry forehead, turn, and leave.

We’re close now. Ray estimated it would happen in 2045; Vernor, in 2030. I never thought we would beat both of them, but that’s what’s going to happen. I walk down the hospital halls, empty and silent, save for the hollow beeping of life support. The ringing of my phone tramples the electronic Marco-Polo. I answer, quickly.

I race out of the hospital, and my mind sinks back to a moment at a inordinately underdeveloped and over-commercialized Singularity Conference – One of those conferences populated by excited scientists, physicists, technologists, and engineers who aren’t focused enough to understand that conferences are a terrible waste of time. And me, who only attends because I’m extremely well compensated to do so.

“What’s going to happen, when we reach Singularity?” A kid asked me, at the Q & A. He’s one of those kids that wears ankle socks that are a little too high, with cheap white sneakers, K-mart jeans, and a t-shirt that proudly displayed the periodic table.

I lifted the microphone, and hesitated, for a second.

“There’s a long answer, and a short answer.”

I snaked through the hospital parking lot to my car and drove to the lab, where it was going to happen.

“The long answer: Singularity is going to change everything. It’s going to mess a lot of things up. It’s going to scare a lot of people. But it’s going to open up things that we didn’t know were possible, in a very, very frighteningly beneficial way.”

There’s an analogy that I wanted to use at that stupid fucking conference, but the look in the kid’s eyes and the periodic table on his shirt kept me from blurting it out. I gave him the sugarcoated answer, but there’s another one:

It’s cancer. And in order to get rid of cancer, we have to try chemotherapy and surgery, and radiation and drugs, and photodynamic therapy and everything else. And chances are, we won’t understand it, no matter how hard we try. But it might work. And if it does, your mother recovers. And lives. But only if you embrace the chance that it might not work. It hurts like hell for you, and it hurts like fuck for the people around you, but life won’t move forward unless you let the cancer die. You substitute an evident death for a tentative life. A very high chance of failure for a very much-desired success.

The future absorbs you. A dark, shapeless mass breathes you in, and exhales permanence.

I arrive back at the lab, and run inside.

“The short answer?” I looked that nerdy kid with the fucking periodic table shirt in the eyes and said: