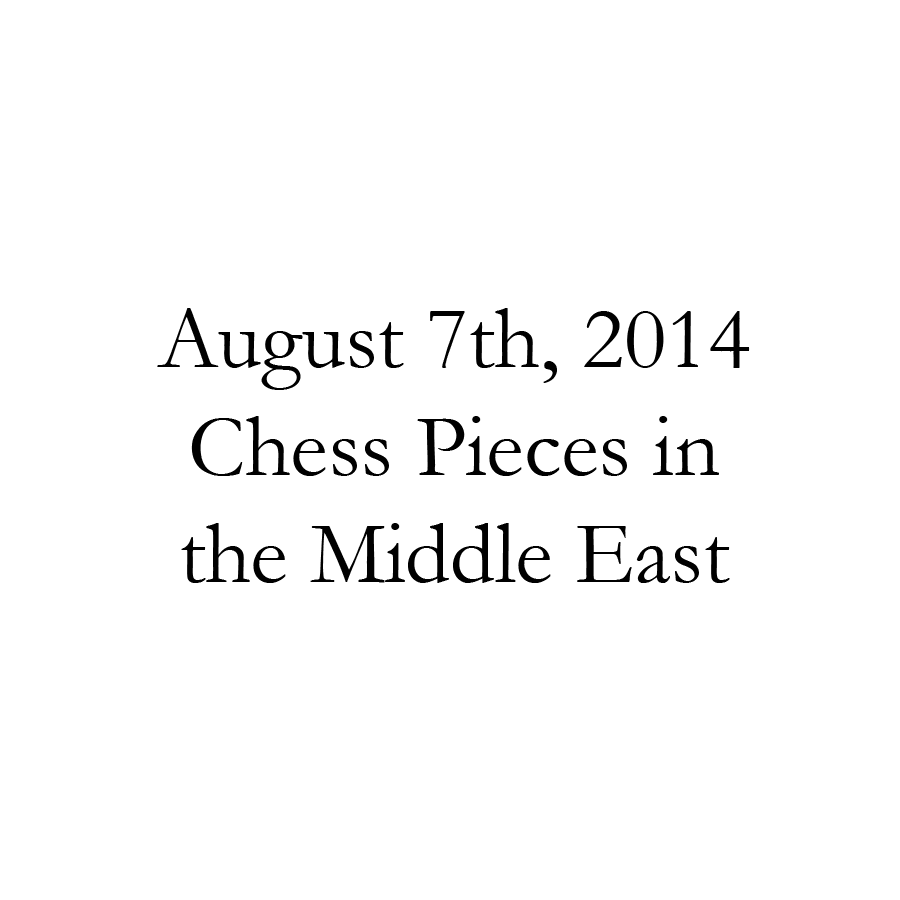 Sweat poured from our scalps like a leaking faucet, drenching our thick canvas uniforms and our vests to the core. My hands always shook violently about ten minutes before anyone fired. The others used to joke that I was a psychic or a fortuneteller. “There’s no getting out of this alive.” They’d say.

Those were the same words that the king piece would say when he looked at the pawns. At the very beginning of the game, he would step out onto the checkered board, not unlike the barren desert that we crisscrossed in Humvees, and declare: “There’s no getting out of this alive,”

And the pawns listened. Each and every one of them. They dive forward into the checkered battlefield, two steps at a time, but they never hope to stay alive, because they know that they’re not meant to live until the end of the game. The pawns are the ones that don’t want to go back to the States, whether it’s to their family in Louisiana, or their unfaithful wife in Upstate New York, or to that hellhole of a corporate job outside of Chicago. They’re the ones that never intended to go back, and so they aren’t afraid to go forward.

The knights, on the other hand, they fight like hell, but they hold onto a small hope that they could at least survive to see something they consider important: The very beginning of the end game, maybe. If they play it right, they could be the ones that reach the very end and put the other side in checkmate. They could be the ones to wrap everything up and knock the king down. They’re the ones that always wanted to be in a war. And so when the Middle East opened up like a cracking scab, they got their chance to be the hero they always wanted to be, only to discover that dying doesn’t automatically make you a hero, and neither does living.

The Bishops are the ones that believe with all their hearts that they’ll survive. They’re protected, after all, by some kind of sovereignty, or some kind of deity, depending on how they look at it. Whether their god is their family, or Allah, or Jesus, or themselves, the possibility that they get hit doesn’t cross their minds. Instead, their heads are filled with the things that they plan to do after the war. They know what they’re going to do the next day, and the next year, and the year after that. But because they hold onto those plans so tight, they never let go to reach for the next one.

The Rooks are the ones that aren’t afraid to face you straight on, but will castle and protect themselves above everything else. They aren’t there to be a hero. There aren’t there to take anything or give anything. They’re there, on the edge, the very corner, and their goal is simple. Protect yourself, and yourself only.

The Queens are the ones that think they’re too important to lose. And so when the bullets finally do shatter the arid, bitter heat, and my hands stop shaking, and it’s time to let go of everything, they can’t. They’re too close to life, and they love it too much, even when it looks them in the eyes and says: “There’s no getting out of this alive.”

There is only one king. One authority. It has the final word, the absolute say in who lives and who dies. It’s the most important figure, the one thing that everyone will die for, but nobody wants to give up. The king is life.

My hands shake more and more violently, and the radio crackles like broken glass under our boots.

“What is it, psychic?” One of the bishops asks me.

Bullets fill the void before I can answer.

I want to say something other than “I’m a fortuneteller,” but that’s the only thing that fills my mind, other than the roar of machine guns and explosions.

I want to hold on tight. I want to go back to the States, all in one piece, safe and sound, on the same street that I grew up on in Concord, North Carolina. I want to be a hero. I want to be watched over, by a deity. I want to protect myself. I want to be too important to die. I want to be every piece on this god-forsaken chessboard, this flat, barren desert.

And there’s no getting out of this alive, so I decide that I’m not afraid to move forward. And for the first time since I was placed on the board, my hands don’t shake as I run into the fray.