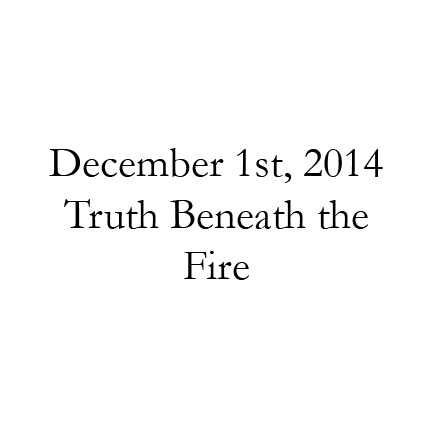 The forest behind Johnny’s house consumed him almost more than his own imagination. He used to climb and wrestle through the woods in his backyard every afternoon, and spent more time there than anywhere else he could think of. He very much enjoyed imagining that they were more than just “woods.” “Woods” had always sounded so hollow and superficial to him. Whenever he found himself alone with his thoughts he called the woods the “forest.”

After delving deep into the forest, learning the intricacies of the twisting trees and the thick reams of bark, he unearthed a staff.

It could hardly be called a staff, really. It carried none of the strength that a real staff would have. None of the integrity, none of the vibrancy, none of the deep, rich grains that could have bound it together. But Johnny carried it, nonetheless. Like a victorious character of biblical aspirations, he clung to it and battled imaginary demon after demon. Over time, the rod grew shorter, when it chipped against a rock in the creek, or from Johnny slamming it against an imaginary demon a little too enthusiastically. It barely held together, but Johnny didn’t care.

He carried the staff with him everywhere. When his mother told him not to bring “that stick” to the dinner table, he looked at her sharply and said:

She replied by weaving an intricate tale about how medieval knights would never carry their staves to the dinner table. Johnny accepted this elaborate fiction, but only because he quickly discovered that he would miss dessert if he refused.

But immediately after dinner, he raced outside and clasped his staff in his childish fingers, and let himself be swallowed up by the forest. His jacket became a hooded cloak; his ruddy tennis shoes, leather boots crafted for silent travel.

That evening, when he returned, a vibrant glow emanated from his backyard. His father and brothers were crowded around a growing campfire.

Johnny watched his dad feed kindling and logs to the fire, the flames lapping higher and higher, like the rising tongues of Johnny’s imaginary demons. His eyes were glued to the radiant blaze, until his father noticed him.

“Head inside, Johnny. About time for bed.”

He hesitated, but obeyed. He placed his staff beside the back door, where he always placed it. Despite his fading wakefulness, the glow of the fire cascaded on the wall through his bedroom window, and kept him awake deep into the night.

The next morning, before school, he gazed out the kitchen window, his breath misting fog on the frosted glass. He saw the blackened fire pit, and recognized his staff. He screamed and ran outside, spilling his breakfast on the floor and leaving the door wide to the cold breath of the wind.

He slowed as he approached the dead fire. He stood over it and sobbed. The coals rippled and spat smoke, turning and breathing like a defeated, imaginary dragon. And from its side, hung Johnny’s staff.

“I’m sorry, Johnny,” his dad said, breaking the funereal silence. “Your brother must have just thought it was a piece of firewood. Don’t be angry.”

Johnny just watched, as the remaining fragment twisted in the dying heat.

He took one last look at the defeated fire, turned, and went inside. The woods were never just woods — they had always been forest. The stick was never just a stick — it had always been a staff. And the fire had never been just a fire.