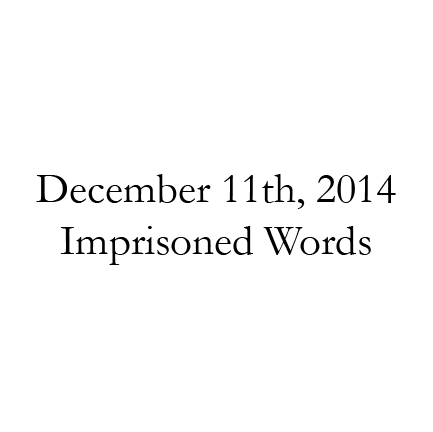 Some pretty nasty sentiments come to mind, and although there would hardly be any consequence in me spewing a string of violent profanity toward myself, I somehow try very hard to bottle it up. Instead of cursing myself, and flinging F-words at my face, I decide it might be safer if I don’t. I can do that, right? If I were angry with anyone else, I would probably find a way to subdue my anger and my frustration and seek some kind of reconciliation. So why can’t I do that for myself? That’s healthy, right?

But no! I’m not even half as interested in reconciliation with myself. It’s just me, after all? So why can’t I curse myself? Why don’t I just look myself in the mirror and declare, very sincerely: “Fuck me.”

Well, it’s not really healthy, I suppose, to treat yourself that way. It’s healthy to be angry, I think, but not at yourself. Even though in this situation, maybe I’m the only one to blame. So why don’t I deserve it?

I’m unsatisfied, frustrated, angry, jealous, tired, covetous, irresponsible and bored with my own existence. And as much as I try to trace those poisons back to someone else, on whom I can nail all of my pending profanities, they all just track back to me.

That’s not entirely true. I trace them back, reverse engineering them like a forensic detective, and find that they just end up at this thing called “wanting”. We’re programmed to want, really. But the fucked-up part is that we’re programmed to want things we just can’t have. The problem with me, I think, is that I’m generally okay with passing on a golden opportunity, until someone else scoops it up and gives a pretty nice acceptance speech. And then the only thing I can think about is how much better an acceptance speech I would have given. After all, I practice it in the mirror every night.

The bitter words rise in the back of my throat, like imprisoned animals waiting to be released. I try to decide if it would be better to just be honest with myself, just tell myself what I think of myself and my stupid inconsistent wants, or if I should just swallow my rage and let it slowly dissipate into my bloodstream.

Every time I step in front of the mirror from now until eternity, I’m faced with these two options: Would things be any better if I looked in the mirror and threw a massive cinderblock of profanity at my own head? Or is it healthier to just let it gnaw and decay inside my skull?

I think that maybe the only solution is to just not look in the mirror in the first place.