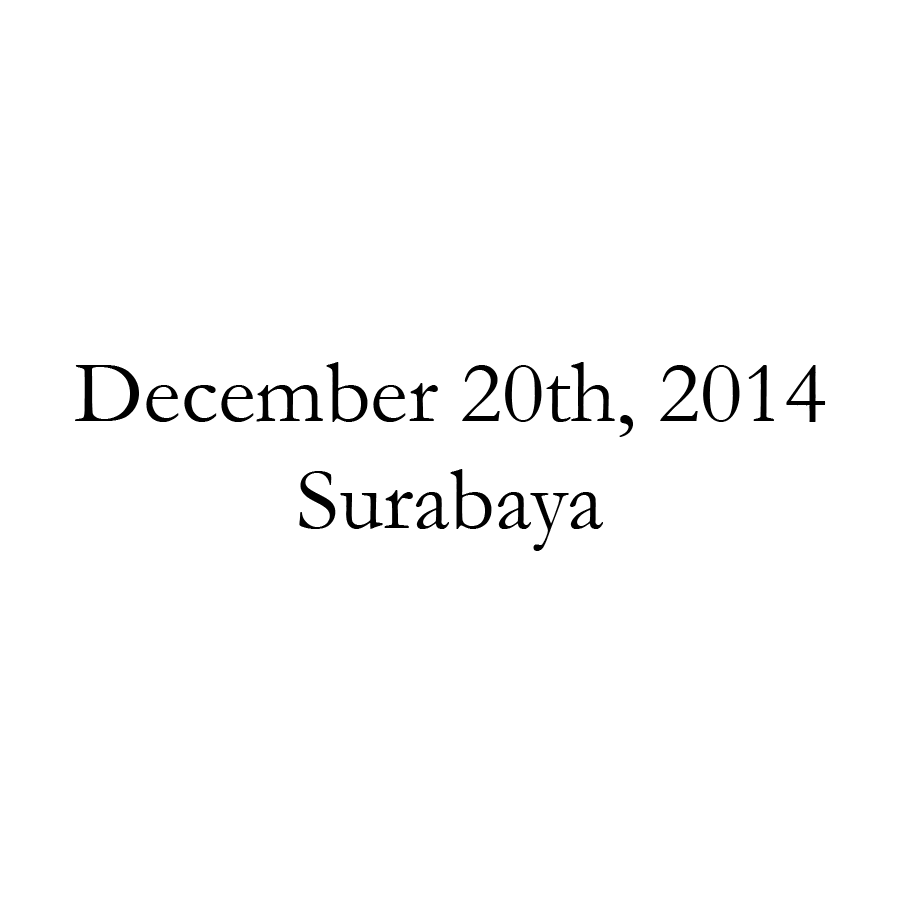 It was unlike any other place he’d ever lived. It was crowded, and hot: 110 degrees Fahrenheit every single day. But Austin didn’t mind it. He loved it, actually. Every single day, he knew he was alive, because of the intensity of existence, as if the fabric that held his life together was being stretched and pulled and loosened.

But coming back to the States was even more stifling than the 110-degree heat, and more suffocating than the thick, polluted air in the vibrant city. Nobody in the comfortable, ticky-tacky homes of suburban North Carolina could find any reason to try to understand that. And why should they?

When he first returned, and someone asked about his time in Surabaya, he would try to explain the intricacies of what it felt like to wake up to the sound of Muslim prayer calls, or the brief escape from the polluted air one experienced while riding a motorcycle through the grime of the city. After several blank nods and abrupt changes of subject, he would shorten the recollection to a quick anecdote about the foreign metropolis, but even that, he found, was too much. He quickly and tactfully shortened the answer to:

“It’s quite different than anywhere I’ve ever been.”

Which sated almost everyone who thought to ask.

John married for the wrong reason, although nobody would’ve known it. They seemed made for each other. But a misalignment existed, deep beneath the surface of their relationship. Had you asked him six months before he started dating her if he could ever see himself with her, he would have said, “Hell, no.”

But he moved back to Winston-Salem, and felt that inevitable feeling of loneliness that one gets after moving into a dull, white apartment, and having no posters to put on the walls. She’d just returned from a year studying abroad, and was excited that he was back. She sent him a Facebook message, but only after typing it and retyping it a dozen times.

She’d always remembered him as a strapping, eager young man, brazed with fresh, strong eyes and a clean, warm smile. He hadn’t married her because he loved her. She didn’t accept his proposal because she loved him, either. His loneliness met her desire to be loved by those fresh, strong eyes, and that warm, clean smile. And so their authenticities and inadequacies fed on each other, slowly at first, then, as time passed, violently.

Austin met John’s wife not long after he returned from Surabaya. John had gotten married while Austin was abroad, and there were complications with Austin’s return, so he didn’t have the chance to make her acquaintance until three months after the wedding, far past the honeymoon phase.

After he landed at RDU, John invited him over for dinner at their ticky-tacky home in the vast, cardboard, suburban topography of Cary.

John told himself that he loved her smile, but he began to toy with the fear that maybe he just loved the feeling of not being lonely. Early in their relationship, he accused her of plastering her youthful, flirtatious smile onto other guys, and he made sure she knew he didn’t like it.

“What am I supposed to do? Not smile at anyone?” she yelled, finally.

He didn’t answer. He couldn’t think of any response that wouldn’t sound like one he’d borrowed from a relationship counselor, so he kept silent. Only to feel, once again, the dull pain that comes from muted conversations.

“Surabaya!” she almost yelled. “I lived there for almost four months, it was so great!”

He hated it when she got that excited. Usually because, no matter how hard he tried, he could never match it.

“Wait—” she stuttered, laughing. “Pabean Sayangan? Like, the one close to Warung Puas?”

John looked between them, nervously.

But they didn’t hear him.

“That’s awesome! I probably passed by your house every day!”

“Wild. It makes you wonder how close we were from missing each other! Just think.” Austin paused. “Did you go to that festival that they had? What was it called? Pakuwon?”

“Padawan,” John joked, but they didn’t hear him that time, either.

“Pakuwon! Yes!” she cried. “I tried to go, but there was some stupid traffic accident, and we were stuck behind a truck for, like, an hour.”

“Wait, wait, wait—behind a truck? Where were you?”

“No way!” Austin said. “I was stuck right behind that stupid truck!

John walked into the spare bedroom and tossed Austin a pair of clean towels.

“Glad you’re back. Let me know if you need anything else.”

Austin looked up from his laptop.

There was a stagnant silence, until finally, John spoke.

“Sounds like you had a good time in Suraby.”

“The name actually comes from two Javanese words, ‘sura,’ which means shark, and ‘bayo,’ which means crocodile. Some story about the two of them fighting over territory, or something.”

“Yeah. It’s sort of a crazy story. The folk tales there are pretty popular. Apparently, the ocean got tired of being ruled by the shark, and rose up and became the Surabaya. That’s the backstory, at least.”

Austin looked up, and saw some kind of rawness in John’s eyes. Finally, he just answered:

“It’s quite a different place than anywhere I’ve ever been.”

Austin’s stock answer rarely failed to sate anyone who thought to ask, but John offered nothing in return. He just nodded, let the heavy, stagnant silence fall onto his shoulders, and left the room.