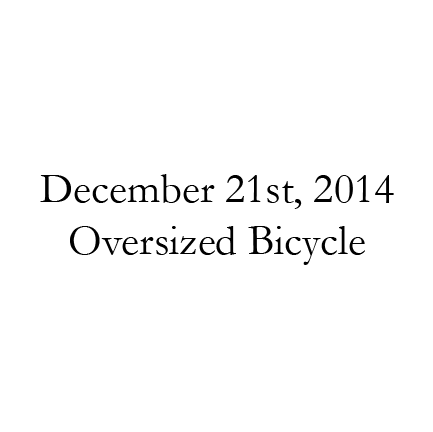 She’s silent but happy as she drives to meet her parents. Their aged, comforting Palo Alto neighborhood awakens the distant memories of her childhood. She drives past the sidewalk where she first learned to ride that goofy oversized bicycle. She smiles and shakes her head. That thing was huge, made for a child who was at least a couple years older than her.

But that was how a lot of things were for her, growing up. It always seemed like she was growing into things that were a little too far out of reach.

She pulls into her parent’s driveway and steps out of the car, carrying a small bag of luggage. She hasn’t been there in years. The clean smell of the front yard and the flowers brings with it the strong aroma of reminiscence, as she walks up to the front door.

Her parents smile and embrace her as though she’s a child returning from the grave. She asks them how they’ve been; they invite her into the kitchen, where they’ve prepared dinner.

They ask her about her time in New York, about her interview that’s happening the next day, about what it feels like to be back. And she tells them. She tells them just enough to satisfy them, but never enough to worry them.

After dinner, she excuses herself, blaming jet lag and apprehension. Those aren’t the real reasons, she suspects, but she either doesn’t know the truth, or doesn’t want to.

She goes down into the spare room in the basement. She unpacks the outfit for the interview the next day, and opens her computer to review her talking points, once again. After she practices recalling every line of experience, she stands, and finds herself wandering toward the old storage closet underneath the staircase. She opens the door.

She clicks the light on. She always finds herself doing this, every time she comes back to visit — poring over old memories and forgotten moments from her childhood. The musty cement is dark and she can tell that it wants to mold so very badly. Her eyes wander to the darkness, where that goofy, oversized bicycle leans, decaying and crooked, in the corner. She touches the handle and remembers riding it.

She hears someone walk down the steps, and looks up to see her father.

“You still haven’t gotten rid of my old bike?” she laughs. “I’m not going to ride it anymore, I promise.”

Her father just shrugs, and tries so hard to make it seem like it’s not a big deal. She waits for him to say something, but he doesn’t. So she laughs, again.

“It was always a little big for me, wasn’t it?”

Her father looks at his feet, and stammers:

“Probably shouldn’t be down here — there’s some mildew, and I don’t want it to get into your bedroom.”

She looks up at him, curiously, and concedes. Her father hesitates, then asks:

“Do you need anything for tomorrow?”

“I don’t think so. I’ll be leaving pretty early.”

“Okay,” he says, and shuffles back up the stairs.

She considers reviewing for her interview, one final time, but something calls her back to the mildewed closet underneath the stairs. She steps to the stack of cardboard boxes and sifts through the old belongings: clothes, preschool toys, children’s books and more children’s books.

A photograph falls out of one of the books. She kneels down, and scrapes the photograph from the damp, dark concrete floor.

She can’t recall ever seeing this photo before, or the child that appears in it. She stares at it for a long, long time.

The unrecognizable girl is not one of her cousins. She’s not one of the other nieces or nephews. She’s not a distant relative, or a friend’s child. The little girl belongs to them. Her eyes are the same.

She stays awake far into the night, only to find that it’s morning already. She showers, and tries to wash the feeling of disorientation from her mind. She dresses in the outfit that she laid out the night before.

She steps out of the house quietly, while her parents are still asleep. It’s early, but no other place beckons her mind.

The aged and comforting Palo Alto neighborhood has hardly awakened in the California warmth, and the chill of the morning gnaws deep at her memories. She drives past the sidewalk where she first learned to ride that goofy oversized bicycle. That bike was huge, like it was made for a child who was at least a couple years older than her.

She bites her lip. She wonders if she would want to know the truth, if it even existed.