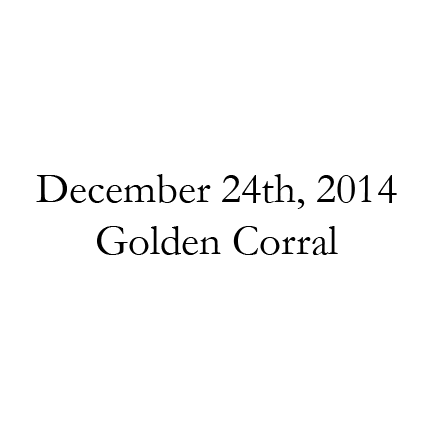 She’s working the evening shift. The shift that nobody else wanted to take: the Christmas Eve shift. Why? Because everyone else asked her to take it. And her heart leans a little too far toward what she thinks is sympathy, that she ends up being taken advantage of once again. But she doesn’t mind. Or at least, that’s what she tells herself. She hadn’t looked forward to spending Christmas Eve with her stepdad, anyway, and the Christmas Eve shift offered her an excuse to tell him:

“No, I can’t spend Christmas Eve with you.”

He’d gotten a little upset when she told him that. By the end of the conversation, he demanded that she spend Christmas Eve with him, even if it meant quitting her job at Golden Corral.

She hurries across the cold, wet parking lot at 9:30 in the morning. She shivers, and glances across the street at the lines of traffic weaving and winding around the shopping mall. She wonders if she’s missing something; maybe she is supposed to feel some kind of special Christmas sentimentality. But she doubts she would even if it was snowing and Santa himself appeared.

She enters the large dining hall, and the restaurant quickly teems with overeaters, gluttons, and stupid boys with eternally high metabolisms.

The guests offer wishes of “Merry Christmas” and “Happy Holidays.” Some look like they mean it; some don’t. Instead of saying “I’m sorry, I don’t know how,”

she just smiles and says, “Thank you, you too.”

The afternoon slushes past, and the traffic slows, as if to give them a chance to prepare for the evening crowd. She wipes down tables and frantically scoops up leftover plates and silverware.

As the dining room fills, she surveys the floor and recognizes some familiar faces. One of them, a ridiculously thin Asian guy wearing a Wake Forest hoodie, is about her age. Probably a recent graduate. He has nowhere else to go on Christmas Eve, she is sure of it. He just comes in, smiles at her, piles food high onto his plate, and eats. And she smiles back, because, she thinks, he might be the one person that actually belongs in a Golden Corral on Christmas Eve.

Nancy, on the other hand, does not. She creeps through the restaurant doors slowly, pushes her walker forward, and makes a beeline for the steak and fries.

“Oh, I’ve been in the hospital,” Nancy explains.

“Yes. I had a double bypass surgery, but I’m all better now!” She smiles, and takes a bite of salty steak fries.

And when she truly starts to doubt that she could ever feel that kind of Christmas sentimentality, Santa Claus himself walks in. A hefty, tired man in his mid-thirties waddles into the large dining room, scoops up loads of food from the buffet, and sits alone in the corner of the hall. She carefully cleans the tables beside him, and he pipes up, in between bites.

“I just got off a freakin’ six-hour shift,” he says. “Kids. Freaking kids. All they want is video games. Crying and screaming for video games. When I have kids, they’re not getting any damn video games.” He shovels a bite of mashed potatoes into his mouth and shakes his head.

She nods, unsure of how to respond, but promises herself that if she ever finds herself playing Santa, she’ll remember that.

She clears a table, and turns back to the kitchen.

“Must suck to work Christmas Eve,” he mutters, mouth full.

“Hey, I just got done pretending to be Santa for six hours. It sucks, I get it.”

She smiles, and shakes her head.

“You hanging with the fam tonight after work?” he asks.

She pulls out a rag and pretends to wipe down an already cleaned table, just so she doesn’t have to make eye contact.

“Not really any family around here.”

The Santa man shovels another bite of food. He looks around, at Nancy, at the Asian guy. At the families who were too lazy to cook, at the guys with eternally high metabolism, at the overweight guests who just wanted a place to eat at a buffet on Christmas Eve.

“Well, this is sorta your family, isn’t it?”

She pauses, and looks around.

She’s not sure if she should smile, but she does, anyway. Not because Golden Corral is her family—it’s not. Not because there’s any truth, or warmth, or sentimentality to what the Santa man is saying—there isn’t. She smiles because it’s hilarious, and screwed up, and not the way things should be. She smiles because the Santa man knows that, and this is his small way of trying to say, “Merry Christmas.”