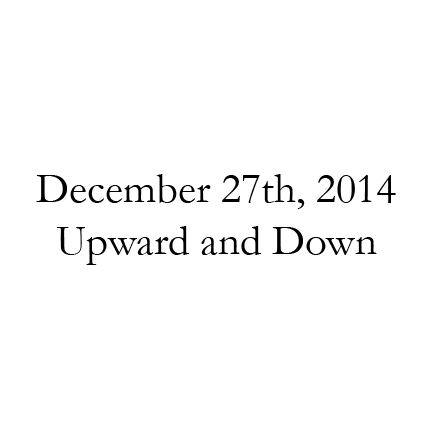 The tree in the yard grew vibrantly, upward toward the sky. Its limbs stretched and reached brilliantly, as if to ask:

“Sky, sun, rain, and earth—make me into something great!”

The flowers and the shrubs around the tree watched in awe, waiting, with fresh leaves and strong roots, for this tree to become something great, as they all knew that it would.

The young gardener boy who had planted the tree arrived early one morning, just as winter began to fade and spring began to arrive. He circled the yard, pruned some of the shrubs, picked some of the flowers, and came to a halt at the tree.

The tree had yet to sprout fruit from its branches. But the young boy was patient. He watered the tree, and decided to come back the next season when the tree had developed enough to bear fruit.

Over the summer and into the fall, the whole garden grew, and watched the tree grow, despite its barren branches. Through the scorching heat of midsummer evenings, and the shivering cold of the early year, the tree reached up to the sky, as if to plead:

“Sky, sun, rain, and earth—make me into something great!”

The next season, the young boy returned. He circled the yard, pruned the shrubs, picked the flowers, and came to a halt at the tree.

The branches had grown, and hung just over his head, but still, no fruit had emerged from the ends of the limbs. The boy shrugged, pulled out a bag of fertilizer, and spread the rich, heavy soil at the base of the tree. Once the roots were nearly suffocating in nutrients, he stood, brushed the dirt from his hands, and left.

The tree felt stilted as it grew, into the summer and over the fall. It felt outpaced, and unprepared for growing. But the rest of the garden watched it attentively, waiting for fruit to emerge. And yet, it never did. January came quickly, and the tree’s naked branches reached for the white sky, yearning and pleading for something more than itself.

The young boy returned the next season, but instead of circling the garden, he went straight for the tree. He yelled and muttered in disappointment, and kicked the tree’s trunk in anger. The thin, fast–growing bark split open, and the young boy paused, in an instant realization.

He left quickly and returned with shears and clippers. He set up a step stool, and climbed up to prune the branches.

“There,” he said, when the tree had been pruned. “That will teach you to grow fruit. You’re meant to grow fruit. I know this, because I planted you, I did.”

The boy left, and the tree hung, sadly and silently, with sap dripping from its muted branches. But the garden grew forward, into the New Year. The tree slowly recovered, and by the next season, it had renewed itself.

The boy arrived once more, and cursed the tree as he saw the naked branches.

“I planted you, ” he said, with contempt in his voice. “Why won’t you grow fruit, like you should?”

But his anger was short lived. He disappeared and returned quickly, with tape and a knife and a handful of fresh, green branches. The tree watched as the boy sliced into the limbs and grafted on the twigs of another tree. He dumped loads of fertilizer at the base of the tree, stood, and left.

The garden seemed to stretch and warp in the tension of the season, but not compared to the tree itself. The fertilizer accelerated the tree beyond health and beyond movement, and its bark cracked with the explosion of growth. The tree stretched and screamed, but no fruit grew.

The young boy returned to the garden the next season, and his eyes fell in disappointment. The tree stood, torn and stilted, with barren limbs and awkward grafts.

The boy grabbed his axe and called for others to join him. He pointed to the tree, but the other men corrected him, and pointed to the ground around the tree.

He dropped the axe, and retrieved a shovel. He sunk the shovel deep into the earth, to loosen the tree from the ground.

His shovel hit something, hidden in the dirt. He knelt to examine it.

Juice from a bright red fruit spilled into the dirt, split open by the shovel blade. He cleared the dirt to see a vast network of berries, clinging to the roots: Bright, vibrant, and alive.

The freshly awakened smell of the subterranean fruit met his senses.

He stood and threw the shovel aside.

The tree in the yard had grown, vibrantly, upward and down, to become what it was meant to be.