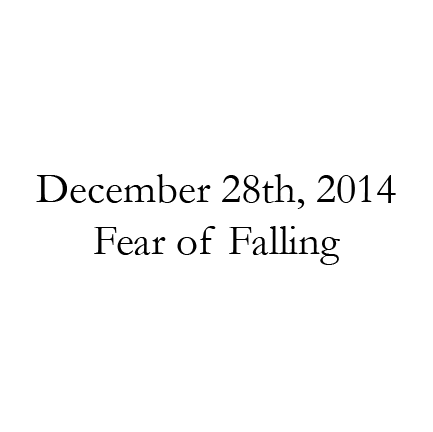 You may have felt this sentiment at some point in your life, about any number of things. Maybe you realized what you were about to do was wrong, or that there was a much better alternative, or maybe you just changed your mind and threw it all out the window. On this bright, sunny afternoon, Jack experiences all of these.

“I changed my mind. I don’t want to do this!” he yells, and his voice wavers over the deafening roar of the plane, rushing 12,000 feet above the earth. The weight of his parachutes clings to his torso, and he shakes, violently.

He looks back at his instructor.

I’m sure you know that feeling—the feeling of biting off more than you can chew. It’s not an enjoyable feeling, because there aren’t many ways out of a situation like that one.

“Just do it, man!” the instructor yells.

The instructor had always struck Jack as a nice, responsible person; and he’s fairly certain this man wouldn’t tell him to do something unwise. The instructor uses the “Adrenaline Encouragement” tactic—prompting Jack to make a decision in the heat of the moment, purely on adrenaline, but Jack shakes his head.

“Come on, man! You got all the way up here, just jump! Don’t think about it!”

This bothers Jack, because the notion of not thinking about something sounds like a very bad approach to throwing oneself out of an airplane.

“You wouldn’t want to get back and say that you couldn’t jump, would you? Think about what everyone else would say!”

But that doesn’t work either. Jack is stubborn, and there’s not much that he feels would make him embrace the vast weightlessness of free falling in the sky.

The instructor tries reminding him of the expense:

But Jack just shrugs. $245 dollars isn’t enough to make him jump. Why would it be? Money is an entirely poor motivator when fear is involved, and jumping out of an airplane is no exception to this rule.

This frustrates the instructor. He keeps his composure, but the tone of his voice is harsh:

“You need to jump. You came this far, you have to jump.”

“This is your chance, Jack. If you don’t jump in the next twenty seconds, you’ll miss your window. You probably won’t ever get this chance again. Jump.”

Jack looks back at the instructor.

He questions himself: Why would I ever do something this stupid? Why would I get myself into this situation? Why did I think it would be fun, or cool, or exciting to do this? What was I thinking?

Jack shakes his head, and leans away from the window. He can’t bring himself to jump. He yells, once again:

The instructor pushes Jack out of the plane, because fear is a terrible reason to not do something.