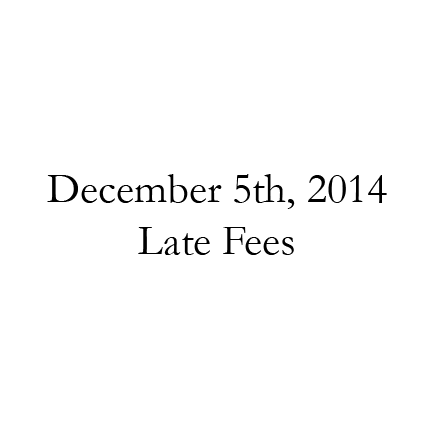 Late fees seem like a cruel way for video rental stores to squeeze more money from my wallet, like my wallet’s a lemon and they’re making lemonade. Some grubby executive at Blockbuster or Hollywood video probably thought to himself: “Let’s charge them an arm and a leg if they return the movie late. That’ll make me really rich.” So they did. And that’s why I’m running around like mad right now, trying to decide if I should watch the end of this movie, or if I should just press the fucking eject button, slide the tape back into the case, and speed back to the rental store before they close in twelve minutes. Oh, wait. Eleven minutes.

I’m just trying to watch the end of Forrest Gump, because all of my friends told me it was a good movie, and Tom Hanks is a pretty funny guy, and I didn’t get a chance to see it in theaters. And now I’ve got thirty minutes left in the film, but ten minutes before I get charged double late fees, because I kept the movie too long. I’m pretty sure I could still get to the movie store in ten minutes, if I hit green lights all the way.

I’ve already paid four dollars to watch the first hundred and twelve minutes of this movie, and if I want to watch the last thirty, it’ll be another four. And chances are that I’ll run out of time again, so the last three minutes will cost me twice that amount. And I’m not even sure if the ending is going to be worth it.

I’m sure the ending is great. I’m sure it’s exciting, and I’m sure it’s as heartwarming as all my friends told me it was. But I don’t know if it’s worth paying that much more to see it.

So I press the fucking eject button and slap the tape back in the case, grab my keys and head for the door. I stop.

What if the ending is the best part? What if something happens at the end that makes it worth all of those stupid late fees, and more? Is the ending scene really as good as I want it to be? Or is this just a dark, lemonade conspiracy to make that greedy executive a little bit richer?

Forget it. I take the tape out of the case and slide it back into the VCR. I sit down, and watch the last thirty minutes.

That Blockbuster executive has done his job, his idea paid off, and my wallet is now a shriveled, squeezed-out lemon rind. I watch the end credits scroll down the screen, and I’m glad.

I think that’s what an ending is. It’s a risk. And I’m glad it paid off, even though my money went straight to that chubby executive.