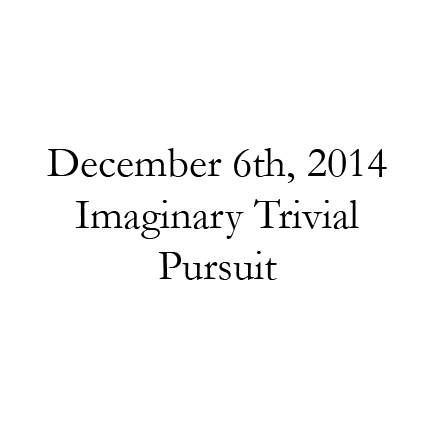 I have an imaginary friend. At least, I thought I did. What I mean to say is, I thought he was imaginary — but recently, he’s tried to convince me that he’s not. That’s been a little confusing, to say the least. What would you do if your imaginary friend all of a sudden announced that he wasn’t imaginary at all, but was, in fact, more real than you?

He appeared, one day, like he always does: suddenly, but when I most expected him, and revealed it to me, quite by accident.

“Only, I’m not imaginary. I’m real. You’re my imaginary friend,” I corrected him, trying to make him see.

He looked at me, confused, wrapped in a thick, x-ray blanket layer of shock. Finally, some imaginary words came from his imaginary lips.

We fell into this awkward existential stalemate, and I racked my brain to come up with ways to prove my existence. But that’s a rather tricky thing to do, it seems. Descartes tried it once, and even though I’ve taken Intro to Philosophy, I’m still not sure if he succeeded or not.

I stuttered and stammered, offering up some poor excuses and some faulty arguments.

“You always just appear, almost out of nowhere. How do you explain that if you’re not imaginary?” I said, struggling very hard to make sense of this self-referentially absurd situation.

“Okay,” I said. “Well, what about all of the things I do when you’re not here? I didn’t see you at all yesterday, yet I did all sorts of things.”

“Well, I took a subway out to Brooklyn, and bought a book at one of those bookstores on Fifth Avenue.”

“And what makes you think that I’m not just imagining that you believe that you did this yesterday?”

An overwhelming sliver of doubt crept into my mind and started to shave my thoughts down to a pulp.

“That makes sense,” he said.

We spent the next four hours trying to claim something that the other didn’t know. The thirty-fourth president? The author of the book The Trumpet of the Swan? The inventor of Coca-Cola? We quizzed each other mercilessly, but our knowledge overlapped, word for word and point for point. Finally:

“Who is Kurt Gödel?” I asked my imaginary friend.

He hesitated, muddled and confused.

He sullenly walked away, and I waited uncomfortably, unsure of whether to console my imaginary friend for being imaginary. I called after him:

“Don’t worry. Being imaginary isn’t all that bad. There’s plenty of trouble that comes with being real.”

But he didn’t turn around.

A day later, he left me a note on my computer. I opened it up:

Who is Gorgias of Leontini?

I bit my lip, and then googled it, because I sure as hell didn’t know the answer.