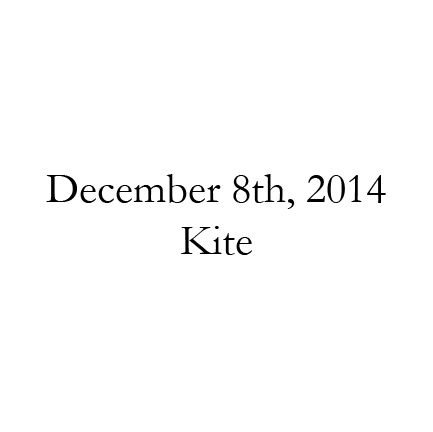 Balancing a kite on my fingertips, like it’s a toy dove with thick paper wings. We had always had promised each other we would fly that kite on the fourth of July, the one dad made for us before he got so worried about us that he wouldn’t let us leave. Dad hadn’t always been like that. He used to let us run wild outside, on the street, calling after us, “Be home in time for dinner.”

But mom had always been like that: so stubborn and defensive. She was like a troubled robin that obsessed not over her newly birthed hatchlings, but over the shells from which they crawled.

The sand between our toes reminded us of all the places we tried to go to fly that fucking kite. My dad had crafted it with raw authenticity and delicate regret. I wanted to believe that with every thread he sewed, he added some of his love of freedom.

We first tried to fly that kite on an afternoon in April. Cold shrouded the overcast sky and laid a blanket over the earth, as if winter wasn’t quite ready to give up just yet. My dad noticed my shivers and wrapped his giant coat around my juvenile shoulders. I watched him and my brother run back and forth, down the hill and back up again, trying to get the beautiful handmade kite to fly. I dug deep into my nine-year-old little girl heart for a rich, teething hope that might mean something more, but it didn’t help. After forty-five minutes of watching the wind throw the kite back to the ground, the paper wings hit the cold earth and snapped. My dad said a swear word, and we went home.

He took his time repairing the kite. I think it meant more to him than it did to my brother or me. While he spent the next couple of seasons slowly and carefully stitching this kite back together, I spent my preteens becoming more vibrantly aware of the opposite sex.

I’d never heard my father so strict as when he told me to stay away from that boy down the street. I couldn’t think of any reason why my father would make up rules like that. So we met in secret.

I don’t know if my father knew, but it didn’t matter. He became more and more strict, just like my mother. Guarding the eggshells instead of the hatchlings that poked through them.

Just after my thirteenth birthday, he finished fashioning the old paper kite, and drove my brother and me out to Nichols Park, past the state prison. My interest waned, and I wondered how long it would take the get my father’s handiwork up in the air. The air was thin and cold, just like the first time the kite tried to soar.

I stood at the bottom of the hill, watching my father and my brother try, again and again, to get that fucking kite to fly. Finally, after an hour of futile attempts, my father swore, and we climbed back into his truck and headed home.

“You’re seeing that boy down the street, aren’t you?” he said matter-of-factly, as we pulled onto our street.

My brother snickered in the back seat.

I bit my lip until it bruised, so I could keep silent.

My father took to repairing the kite like it was his life calling, his duty to society. That night, I crept out and saw Toliver, “the boy down the street.” The “tramp.”

Months passed, and I saw him more regularly. We’d meet in secret, by the creek in the woods. He showed me all kinds of things, things I’d never thought about before. I told him about my family, about my mother and my brother, and my father, and that stupid fucking kite.

“No,” I said, dipping my feet into the creek, and pulling my coat over my shoulders. “Just an American kite.”

He stood, brushing the sand off his trousers.

I looked up at him and smiled. A tramp, my dad had called him. I’d never seen a tramp before, but I was pretty sure that Toliver wasn’t a tramp.

“I’ll sneak it out, and we can fly it sometime. Maybe on the fourth of July,” I said.

We followed my father out to the field again, the same one, the one past the state prison. He ran back and forth like a crazy little kid, trying to make that kite pick up the wind and soar. Finally, he gave up.

My father’s disappointed face cut a smooth incision of grief in my fifteen-year-old heart. He’d given up on his life’s purpose, his civic duty. It made me sad to see him like that, but I couldn’t help but think that maybe he deserved it. We drove back home in silence, and when we got home, he threw the kite in the trash.

The fourth of July was two weeks away, so I snuck out that night and collected the pieces of the family kite. I delivered them to Toliver the next day, after school. He took them in and promised that we’d fly it on the fourth of July.

My mother had planned for us to go down to the lake to watch the fireworks that evening. I lied to her and told her that my friends had invited me to a grill out, and even then, she hardly let me go. My father overheard, and drew the argument out as long as he could, until he hardly had anything left to hold on to. Finally, he said: “Okay.”

I met Toliver at the edge of a wide, open field. Larger than the one my dad always went to. He presented the kite like a beautiful trophy, like a prized kill from a hunt.

We worked together, and let the wind take it, and launch it into the sky. I screamed when I saw it take flight, erupting into the air for the first time since I knew its existence.

We looked in each other’s eyes, and then at the sky, and then back again, like the quiet summer dusk was pumping life into both of us.

The kite soared higher and higher, into the July atmosphere. We ran through the field, laughing and distracted, until the string ran out, and we had nothing left to hold onto.

Toliver looked around, behind him, and then into the sky, after the disappearing speck.

We turned and watched the kite fade into the distance, growing smaller and smaller.

And as it faded further away, and climbed higher, pulling more and more freedom in its tether, I felt an untenable urge to be close to someone. I held Toliver’s hand tight, but knew in my fifteen-year-old heart that this was the one moment when it was right to let go.