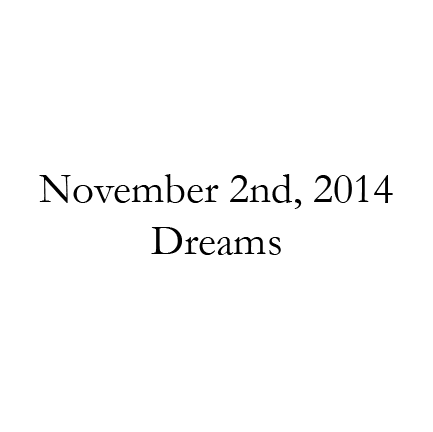 I hear music when I sleep. Those are my dreams; I’ve never seen pictures. When I shut my eyes, my vision shuts down, and is over and out for the next six hours, or until I crack my eyes open once again. Instead of seeing anything during my sleep, I hear: small symphonies, elaborate orchestras, jazz bands, grunge bands, harpsichord and a piano. Bluegrass and low, harsh, concrete rap. Simple percussion tapping on a wall; electric guitars screaming rock and roll.

I didn’t realize that other people saw pictures in their sleep until I was eight years old. I thought that dreams were just stories that my brother and my sister made up to make Mom and Dad laugh when we sat around the breakfast table in the morning. When my siblings told of the elaborate adventures that wound tightly in their heads when they slept, I said nothing. When they asked me what I dreamed about, I had to tell them: “I guess I don’t dream.”

Violin music fills my earliest memories. My father played violin for my siblings and me every Friday night when we were young, before he left my mother. One night, long after my siblings went to sleep and I’d been put to bed, I heard the violin, softly sounding in the quiet loneliness of the night. I crept into my parents’ room and woke up my dad.

“Daddy, why are you playing music?”

“Why are you playing music?”

“I’m not playing music, go back to sleep.”

“Somebody was playing music.”

“You were just dreaming, go back to sleep.”

So I lay back down in my bed, waiting for violin to play so that I could run back to my dad’s side of the bed and prove him wrong. Or he would hear the music for himself, and we would find the nocturnal musician and tell her to be silent, once and for all, so I could finally sleep and see pictures in my dreams like a normal person. But instead, I fought my heavy eyes from sliding shut until three in the morning, when finally, I fell asleep.

In high school, I pretended to dream, just so that I could be like everyone else. But the music never went away. The songs and the choirs and the symphonies only grew more confident and more pronounced. The music performed in the echoing amphitheater of my nocturnal mind beautifully, growing more skilled by the day. And as with each growing skill, the songs learned about me, and my life, and the emotions that rolled around in my head. They started to reflect my thoughts: Rippling, at first, then clearer and clearer, like the smoothest mirror that I’d ever touched.

When my college midterms and final thesis papers demanded the latest hours of my night, the music screamed, with a sour and dissonant and harmonic edge. When my parents divorced, one month before I graduated from college, the music split and formed sounds that I never knew could exist. When I graduated from college, it grew hopeful, and ignored the pure, vicious desire that I carried to hear something joyous and eager and pure.

During my first year as a college graduate, when I was wading through debt and looking for a job that I could call my career, the music twisted and bent with every uncertainty that I felt. When I ran into that old friend of mine I hadn’t seen in far too long, a small build of strings pulled my optimism back to life.

Almost every night, the music swelled and reflected and announced my emotions. Years went by, and my mind became far too small a place for the seemingly infinite course of music. Each song revealed something new.

I never dared to try to replicate them. Each song perched at the forefront of my memory, sacred, and infinite. I felt that any attempt to play or perform my dreams to anyone else risked desecrating my own emotions.

But the songs started to twist, and bend, and scrape themselves like animals—a true reflection of myself as my father’s health faded, like the last breathing note on an empty sonata. The music grew darker, until I refused to even acknowledge the sounds as music. The night before my father died, the music seemed to shred my mind and left my ears ringing with terror.

A week or two later, I drove to his lonely house in Cambridge and sorted through the final years of his life.

In his closet, I found a locker, with his violin still intact. I pulled it out and touched the strings, hesitant, as if the strings could shock or burn me, or transmit a disease.

But they didn’t, and I put the body to my chin and held the bow in my fingers. Fragments of memories of my father instructing me to play faded in and out of my mind. I touched the bow to the strings, and drew it across, slowly at first, them confidently.

I didn’t remember any of the songs he’d taught me, but something remembered me. It moved my fingers and pulled the bow without my consent, until my hands moved independently of my mind. I recognized none of the movement, but every single note.

The violin slowly breathed that single, distant dream of mine into a vibrant, resounding truth. One that I’d heard only once before.