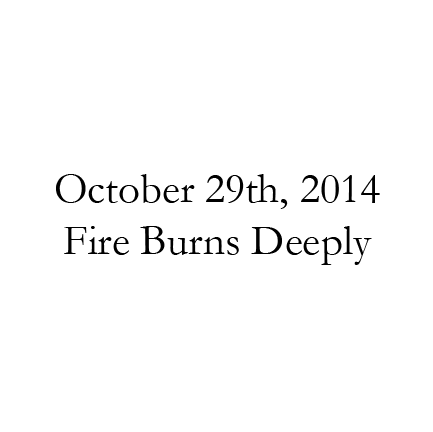 Fire burns deeply, and raw, but chaos is not the engine of fire. Fire burns methodically, and temperately, though it loves to wear the mask of chaos as a disguise. It was like discovering the secret behind a magic trick when I learned his for the first time. And that was just my introduction to battling fire.

Temperature, age of structure, burning duration, construction material, weather, humidity. Each factor added weight in the equation of a collapsing building. To the untrained eye, a raging fire seemed to dive and roar without rhyme or reason. But with the proper calculation of each factor, the collapse of any building could be estimated within three minutes. Guesswork was erased.

Each factor of this equation burned fresh in my mind on that morning: how easy it was to calculate something that I’d always believed to be incalculable. I looked out at the splashing sunlight in the morning sky as I drove home, finishing my graveyard shift.

Anne sat on the front porch, drinking coffee, waiting for me to return. I pulled myself out of the car, sore and exhausted. But a wave of relief washed over me when I saw her. Coming home after a shift at the station offered one of the few moments when I truly felt safe. She’d have a mug of coffee in her hands, and a mug of coffee beside her, waiting for me to return.

But as I walked up to the porch, there was no mug beside her. She spoke, but didn’t stand.

I rubbed my dry, swollen eyes.

I paused at the lowest step of the porch before I entered the house, just in case she wanted to stand and embrace me.

“Swartz is out tonight, so I’m taking his place.”

She hardly looked up.

“You said he was retiring soon, didn’t you?”

“How soon?” she said, almost grudgingly.

“How do you know he’s retiring?” she asked, and took a sip of coffee.

“I just know. Intuition, I guess.”

She sighed and ran her fingers through her hair.

I stepped onto the porch and opened the front door.

“Is there any coffee left?”

When I was young and irresponsible, I used to get the worst headaches after a night of heavy drinking. I stopped drinking and drove some responsibility into my bones, but a graveyard shift fighting fires brings the same crushing headaches.

I woke up in the afternoon, throat dry, eyes gasping for relief. I downed several liters of water, but the headache never faded. When I left for the station, Anne wished me good luck.

Poets compare fire and love all the time, until they start to think of them as the same thing. But that’s a fucking insult to fire. Fire is calculable. Fire is predictable. Fire never happens without a cause, and that cause can always be discovered.

By the time I arrived at the station, my headache still hadn’t faded. I walked into the garage, holding my words in my mind, as if letting them loose would give my head more room to bend and twist.

I passed the whole company. James, Francis, Aaron, Deshawn, Noah, and that fucking jokester, Hugo. I nodded to each of them, and Hugo just smiled back and gave me a limp salute, then mumbled something about me taking Swartz’s place. I smiled, but the headache extinguished it faster than it had appeared. I headed to Swartz’s office to face the mountain of paperwork.

Less than an hour later, the sirens erupted. The average unit arrival time is just under four minutes. Four minutes later, the blazing expanse of a building filled our faces and dried my eyes. I yelled into a radio and we entered the fray.

The first thing I realized was that this building was new. It had been erected with a wave of new city expansion about six years ago, and its unyielding infrastructure reached up to the sky.

The weather hung still. The humidity circled low, but the hour of the night deterred that from being an imminent risk. The fire had spread quickly, but couldn’t have been going for more than ten or fifteen minutes. The color of the flames confirmed my estimation. There was no doubt that we had enough time to extinguish the fire and save the building. There would be no collapse.

But something uneasy scraped my mind, scratching at the surface of my aching mental landscape in the same way that the flames lapped the walls of the structure.

My vision shook, and I looked around, frenetically. The company blasted water into the upper quarter of the building, where the fire had broken out. With every stream of H2O, we gained precious time to battle the fire and secure the building.

I heard some of the company in the room beside me, yelling.

The uneasy ache slowly turned to an uncomfortable terror, and I could hear myself whispering:

Get out. Get them all out. Now.

I stormed into another room, and pulled the hoses with me, extinguishing the fury of heat aside. The thick blade of water exploded from the hose and shot into the disintegrating structure.

Get out. Get them all out of here. Now.

I ignored the words, but they only rekindled, louder and more violently.

Get out. Get them out now.

I heard the men in the other room yelling that they had secured their area.

There was no reason to flee. Fire is calculable, fire is predictable. I looked to the supports, to the beams, to the rooms above us and around us, and none of them waned or faltered. As loudly as my instinct and my intuition screamed at me, the concrete factors screamed louder and held me firmly in their grip.

Temperature, age of structure, burning duration, construction material, weather, humidity. These are the factors of fire, not chaos. Fire is not like love, something to be intuited. And yet, my mind roared ferocious warnings against my aching head.

Tell everyone to get out.

I paused, slowed. I turned.

The twisting structure moved brutally, as if with a shameful plea of forgiveness. A pipe burst and exploded into vapor. Then another. Then another. The foundation moaned. The men across the floor yelled and screamed and scattered.

I raised my drying eyes and turned to the exit, steadily, but with a strange acceptance that I would never make it out in time.

The building collapsed slowly, then suddenly, on top of us all. It exploded into a fury of impossible calculations, and fire engulfed it. Flame ate away at all of us. It devoured my head, and my hands, and my eyes, and my gloves.

But not all of me. It left my heart, and my instinct. After the building cooled and the rescue team showered it down to cold, wet ashes, they found my intuition, untouched and unutilized, right beside my heart.

Neither the fire nor my intuition could sense or see the other, and my heart could do only the same.