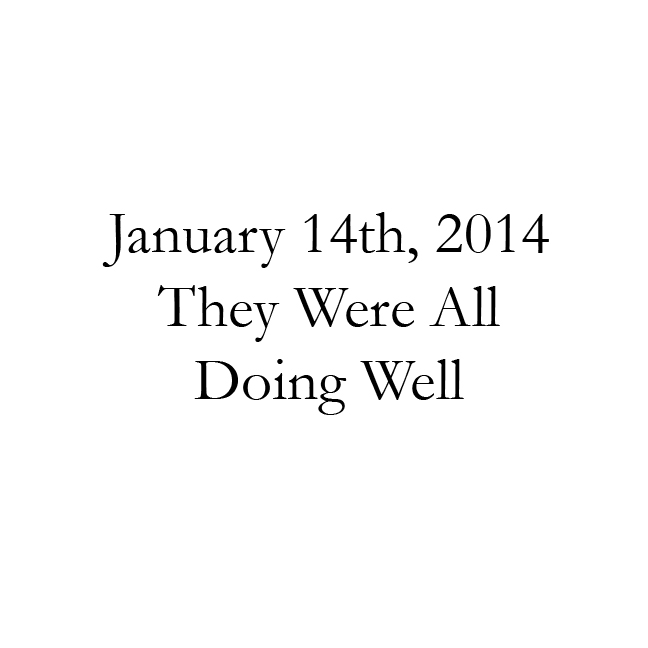 They Were All Doing Well

“Surely,” he thought, “Surely one day of limited interaction with the outside world is not going to be an issue.”

He’d been alone without communication with the outside world for much, much longer. The longest, from what he could remember, was 3 days. That was rough.

He even had strategies for staying focused and staying entertained. He started out with the simple things: Seeing how long he could hold his breath. Counting to one hundred, forward, and backward. Reciting the alphabet, forward and backward. Reciting the lyrics to ‘American Pie’ and, well, that Rebecca Black song. Even though he planned on doing the simple exercises for the first four hours, he started to drift off, finding himself distracted and bored. Bad sign.

He moved on to the more elaborate exercises. Reciting entire TV shows and movies. He was a pro at episodes from ‘House’ and ‘Scrubs’, ‘Breaking Bad’ and ‘The Office’. He had thought about trying to do them backward and forward, but he figured he should try to keep it reasonable, and just recite them forward. After three episodes of ‘The Office’ and one from ‘Scrubs’, he moved on to ‘Forrest Gump’, but got bored of it half way through.

Reciting TV shows and movies inevitably led to character impersonations, which led to explore different accents. But he memorized more than just characters from TV shows, far more. His accents and impersonations started to spread from fictional characters to political figures.

But to be honest, his taste in political quotations was not limited to recent bungles or inane phrases.

“Ask not what you’re country can do…”

But it didn’t stop at political figures. Once he mastered the nuances of political speech, he went on to the very next thing: Actors, rappers, and musicians. From there, he went to people that he knew. His co-workers, his friends, his family members. He practiced their voices, over and over, until he could carry entire conversations out between them. Then it happened.

“Pretty good, how about yourself?”

But it didn’t stop there. He had mastered voices and impersonations to the point where anyone could be there, and no one was absent. In a moments notice, characters from any film or book, or any city he’d ever been to or seen could be alive. The only thing left to do was to create more of them. So he did.

He gave everything a voice. His chair spoke to him. His phone spoke to him, the floor, and the walls, the curtains, the table, the glass and the silverware, the spoon and the fork. They all had voices, they all lived lives.

After the 36 hours were done, he returned back to normal life, leaving the confinements of solitude behind.

“How was it, Mike? Being out there, all alone? How are you?”

He started, but faltered.

They were all doing well.