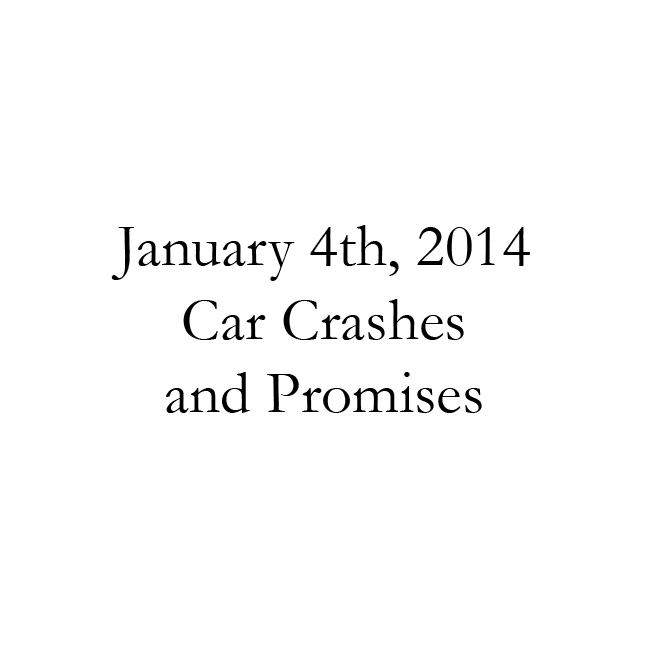 It’s a terrible feeling to believe something with all of your heart and be wrong.

He looked at me, cautiously, suspiciously. He didn’t believe me, but that was okay- He didn’t have to, because it didn’t matter. I was going to get him out, and we were going to be okay.

“Are the police coming?” He asked.

“Yeah, they’ll be here any minute, just… hang on.”

It was the kind of weather where your parents will tell you ‘Drive safe’, and instead of ignorantly brushing it off, you pay a little bit more attention on the road. He had been driving back home from a friend’s house, and the ice was… well- maybe I should have told him to spend the night, not drive back home.

I held my brother’s hand. He started to breath a little faster.

He sat in the car, staring through the broken windshield in front of him. I didn’t want to try to move him, or ask him to move until the cops got there.

Lights flashed behind us – Red and blue streaks piercing through the lines of snow that cut across the highway.

The ambulance stopped and the medics ran out. I heard my voice yelling to them, but I don’t really remember what I said. They put a blanket around me, and led me away from my brother.

Although they led my feet away, my eyes were tied to my brother’s car like chains.

Everything was going to be okay.

Everything was going to be okay.

“Are you injured?” A female medic asked me over the loud traffic. Her voice wasn’t loud, but it was focused, and it was determined.

“You’re brother’s going to be okay-“

And I wondered if she was as good at making promises as I was.

I watched them carry my brother’s body out of the car and onto a stretcher and into the ambulance. I watched them drive to the hospital with him.

And out of everything that I felt that night, I look back, and I wish that I knew how to make better promises.

The kind that I can keep.