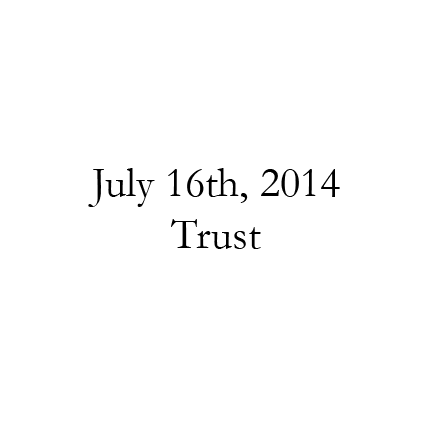 My grandpa used to write with his eyes closed. I used to think it was the freakiest damn thing I’d ever seen. He’d just sit there at the kitchen table, close his wrinkled eyes, reach out his bony fingers grasping for the pen, and touch the nib to the paper. Then he’d scratch the pen back and forth, spelling out crooked words in lines of ink, looking as if he was possessed by some kind of demon.

My grandparents’ house was old and a little rickety, filled with entire walls of dusty old books that I was absolutely positive my grandfather had read several times over. Pieces of bizarre artwork and abstract sculpture hung on the walls that weren’t covered in bookshelves. Even the windows in the spare room that I slept in were covered in paintings and canvasses, transforming the room into a dark cavern.

A large Picasso-type painting dominated the spare room, glaring down at me whenever I spent the night. I’d shut my eyes and try to block out the Cubist atrocity.

When I’d finally gathered up enough courage to approach my grandfather, I’d creep to the corner of the kitchen table and ask:

“What are you writing?” whispering, afraid that this demon would possess me, too.

He’d turn toward me, keeping his eyes closed, reach out the pen and say:

I’d climb up onto one of the creaky old chairs and lean over the table. He’d slide a sheet of paper over to me and I’d give it a try.

“Keep your eyes closed.” He’d say, without ever opening his. I still don’t know how he did that.

I had no idea what he meant. I kept my eyes open, secretly, so that I could see what I was doing, thinking that my grandpa might be impressed that I could write so well with my eyes closed. I didn’t know what the hell he meant by ‘Trust,’ until I tried it for myself.

Everyone carries their own style of handwriting; everyone has tiny quirks in the way that they cross their ‘I’s or cross their ‘T’s. But when I tried writing with my eyes closed for the first time, I opened my eyes and hardly recognized it.

That’s the trick, though. Being so good at writing with your eyes closed so that you can’t tell the difference. It took me a while to understand what my grandpa meant by ‘Trust,’ and it took even longer to become good at writing with my eyes closed. And when I did, I realized that I’d been doing it for a long time. In fact, most people had. They try to form words, without really ever knowing if they’re spelled correctly. They try to form relationships, without ever really knowing where they might be going or what it might be saying with them. They apply for jobs or buy houses or have kids or move or vacation, without ever knowing if their life really looks the way it should look, or is spelled the way it should be spelled.

They try to keep their handwriting looking like they know whom they are, but if they just opened their eyes, they’d see that it doesn’t look anything like they thought it looked like.

Ten years later, I squinted, took a peek at the paper, with my whole life scribbled out in ink in front of me, and wondered:

“Is that really what I’ve been doing this whole time?”

He’d grabbed the pen so confidently, so gently, yet without waver, and slid the pen across the page, forming brilliant lettering.

It wasn’t until then, right then, that I realized what he meant when he said ‘Trust.’