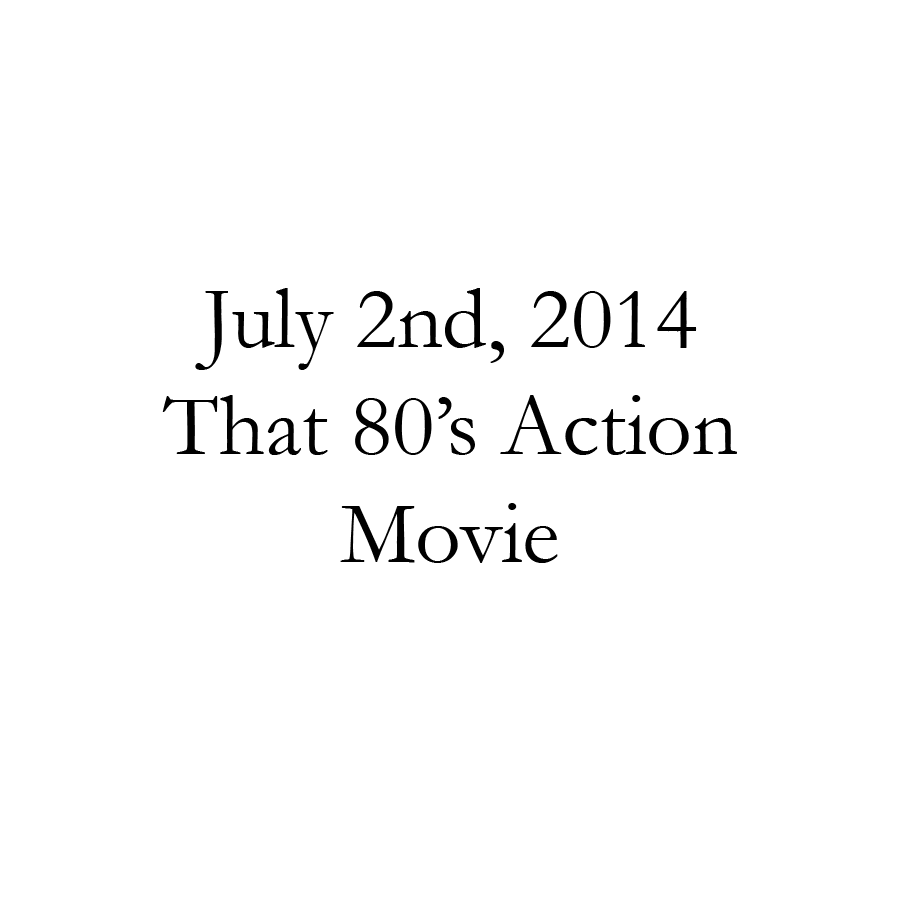 There’s something terribly comforting about cliché dialog – the kind that streams from the lips of a paper-thin action figure character. High on the list of comforting things, right below a hug from my mother or father, and right above a home-cooked meal, is the moment when that paper-thin action figure character runs into the scene, shoots the bad guy, rescues the girl, and wraps the whole movie up with a corny line of dialogue that sounds like it was written by a distracted middle school boy.

“I’m not here to start things. I’m here to finish them.”

Nothing was more thrilling and cathartic for me when I was thirteen than to fill the night with paper-thin action figures, melodramatic bad guys, washed down with ginger ale and pizza. I was fortunate enough to grow up in the 80’s – the golden age of cheesy action movies – and so each summer weekend offered me another opportunity to fill my mind with endlessly formulaic screenwriting.

But I didn’t mind – To be honest, I didn’t mind because I didn’t realize how paper-thin the gun-toting hero actually was, or how mercilessly overdramatic the villain was. To my thirteen-year-old mind, that was just how the world was. Or at least, how it should’ve been.

It wasn’t until I started watching a different kind of movie – the kinds that are written by novelists and are made to win Oscars – that I started to feel duped. I was out of high school by then. My parents divorced the week that I moved to college, as if they had made an agreement to stay together until I got into a good school. By my sophomore year, my dad had gone a little loopy, and my mom had remarried – a banker, of all people.

I didn’t see my dad until my senior year, when he was admitted to a hospital for trying to do some weird stuff. I hadn’t spoken to my mom in nine months. When I finally did see her and her banker husband, she mentioned that she still had some of my things in their house, so I swung by their house after seeing dad.

Their house was just what I’d expected from a banker who would marry my mother: Gaudy and over-dramatic, like those movies I watched growing up.

I rummaged through an old closet where they’d stored my stuff, trying to throw away anything that would bring my naïve, cliché-focused middle school years flying back toward me. I threw everything away, filling garbage bag after garbage bag with terrifying paraphernalia from the 80’s, until I found a box of VHS tapes.

I opened the box slowly, as if I didn’t know what was inside – but I knew. It was stacked to the brim with heroic tales of gun-toting, paper-thin, action figure characters.

I took them out, slowly, one at a time, and read the titles of each. Kill Time, VengeCop, Death Command, Time Bomber, Midnight Soldier, and my personal favorite, Bullet Game.

I almost gagged at the incredible amount of banality. Every figure on the cover of the plastic VHS cartridge was like the other: Muscled, battle-scarred, grimacing, with large biceps, hoisting a large rifle. In the background of the cover, a damsel-in-distress lay, nearly in the clutches of some terrifyingly melodramatic villain, who was, unfortunately, usually foreign.

I tossed them all into a garbage bag and knotted it up.

When I was thirteen, all it took was one line from the action hero and the whole story made sense. The damsel in distress was saved, the bad guy got shot or eaten by a crocodile, and the hero got the girl.

I walked the trash bag to the street and hoisted it into the dumpster.

I paused, and let the VHS tapes fall into the trash can, one by one, until there was just one left. I grabbed it, right before it fell in.

In those movies, everything came together the way it was supposed to. I kept the VHS in my hand, and held it the entire drive back to my apartment.

The hero gets the girl, the bad guy gets shot, my parents stay together, my dad stays out of the hospital.

I kept the VHS as a reminder, maybe, of the way the world should be.