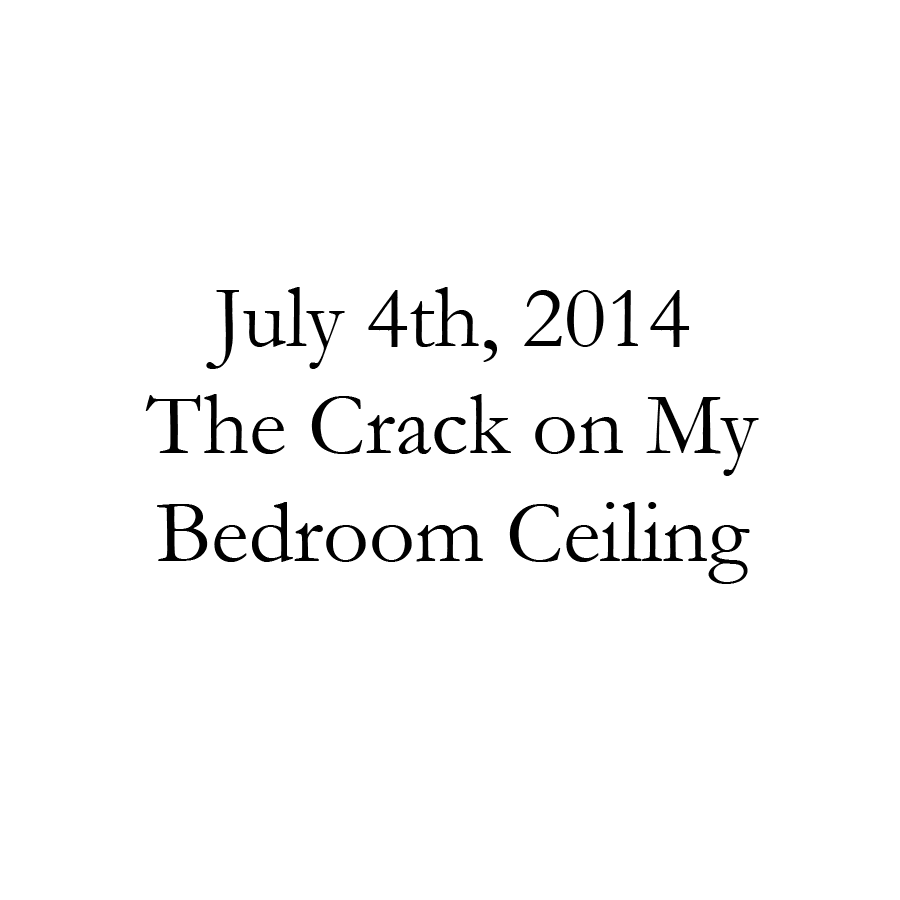 There is a crack on the ceiling in my room. It splinters across the vast white drywall, never quite reaching the edges. When I was young, every night before I fell asleep, I’d stare up at the ceiling and see a river rushing through this tiny splinter, like a grand canyon through drywall. The ceiling was a landscape, inhabited by tiny little people, for whom gravity was reversed. The crack on the ceiling formed a river dividing their land up into tiny little states or countries or cities. The canyon brought water across the ceiling, and farmlands grew around it, then forests, then villages and towns and cities. At the end of this crack on my bedroom ceiling was an ocean, right above my dresser, where tiny boats sailed and the tiny people would vacation when they went on holiday.

If I stood on my bed and jumped high enough without waking my parents or my sister in the other room, I could just reach the tip of the clouds that floated over this flip-flopped, upside down world that rested on my bedroom ceiling. And if I touched even the tip of the small white puffs of cloud, I found myself slowly drifting up, and falling down – at the same time.

Slowly, but suddenly, the vapor would envelope me, and I could find myself standing on my bedroom ceiling, on the bank of the crack that splintered across the white drywall desert. I would walk several inches, to the edge of the drywall forest, and the outskirts of the drywall town, where popcorn mountains could be seen off in the distance.

The inhabitants of the small town greeted me with gifts, confused and puzzled when I said I’d come from the sky, which was not the sky at all, but my bedroom carpet. After several attempts to make sense of it, they all just nodded their heads, and accepted that I’d come from somewhere far off.

The tiny ceiling people lived, for the most part, happily and peacefully – Although sometimes confused by their own astronomy and laws of physics. It was only after I arrived that they confided in me about a mystery they had yet to solve.

A dark ominous force would sweep through the town – Spreading through the inhabitants, making them fall limp for hours at a time. It came and went, sometimes welcomed, sometimes not. People would fight it, but never win. They called it ‘sleep’.

I claimed that I could defeat it, and so they handed me a tiny sword and a tiny shield and pointed me in the right direction. I clambered across the ceiling, my mind still lost in the puzzling laws of physics and how bent they were by now. I waded through the ocean that was above my dresser, and into the forest that was over my windowsill. I crossed the vast open drywall landscape that spanned the center of my bedroom, past a knick in the ceiling that had been formed when my sister and I threw toys the week before. I saw no signs of the monster they called sleep.

I came to the crack in the ceiling, like a grand canyon through drywall, and that was where I saw the first sign of this thing they called sleep. I saw it’s shadow, darting around, and followed it around the room. Slowly, the shadow came closer and closer, evaporating as I reached to grasp it. I swung the tiny toothpick sword and held my bottle cap shield, valiantly, as if defending myself from imminent doom.

Inevitably and inescapably, sleep won, and I wouldn’t be able to tell you what happened after that.