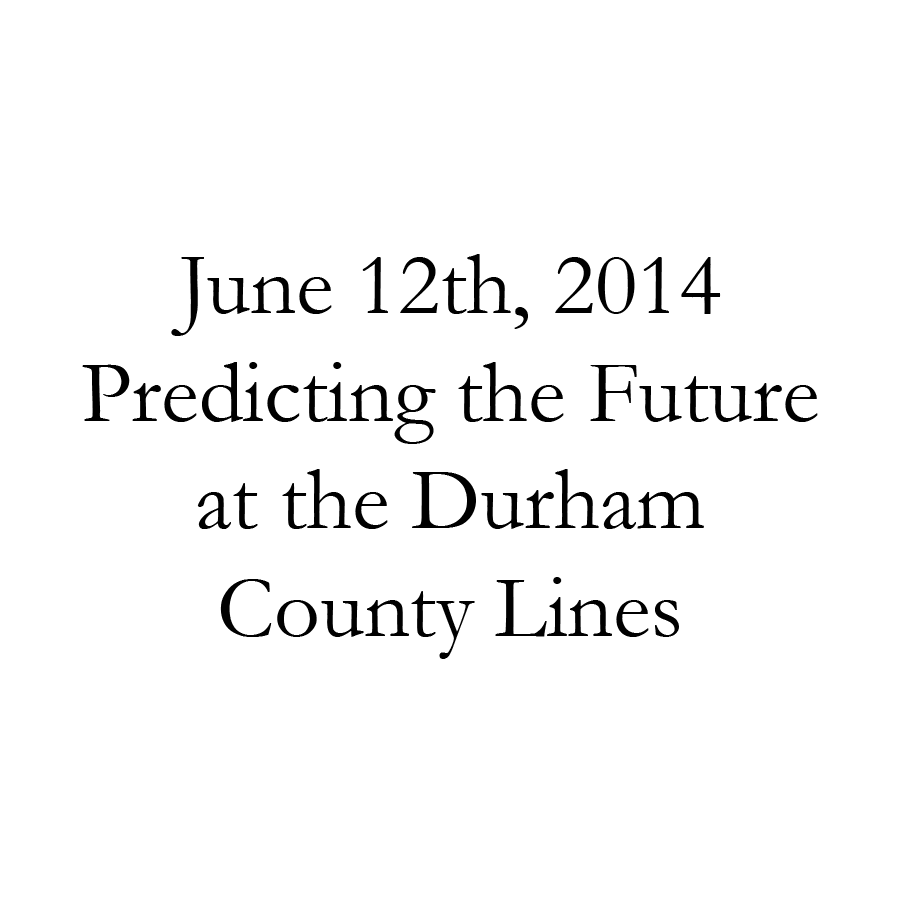 I’ve never been very good at predicting the future, though when I was a kid, I used to try really hard. I’ve only predicted the future once, and let me tell you, I was spot on.

I was walking back to the house. It was late. 2 AM. I’d had a long day of work, and by a long day of work, I mean I was at work since 7 AM. This was going to be bad, I was sure of it.
I looked up from the wet, cracked sidewalk to my house, two blocks away. All the lights were on, and coils of loud bass emanated from inside.

Zane. I thought. Not again, that idiot.

Zane, my roommate, had once again taken it upon himself to host something of a boisterous celebration, probably complete with several girls who looked like they had nothing better to do on a Thursday evening, some guys who were unreserved losers, wannabe entrepreneurs, and Durham enthusiasts with county line tattoos on their shoulders. I stepped up to the door. Zane held it, opened only a crack.

He opened the door, revealing several girls who looked like they had nothing better to do on a Thursday evening, some unreserved losers, some wannabe entrepreneurs, and a Durham enthusiast with the county line tattooed on his shoulder.

I did a double take.

There’s only one person I know who is a Durham enthusiast and has the county lines tattooed on his shoulder. I hadn’t seen him in years, but he was definitely the only person I knew who would ink his flesh with county limits. We’d been inseparable since 2nd grade. I never would have guessed that he’d be at my house at 2 AM, on this night, of all nights, but it was happening.

“Dude! What the hell are you doing here?”

He raised his arms, lifting his two cans of PBR toward the ceiling, the county lines stretching and pulling. He was excited to see me, and also obscenely drunk.

I tried to mirror his enthusiastic spirit and smothered him with a brotherly hug. Suddenly, someone behind me started yelling above the music:

“Alright!” The guy concluded, satisfied with the half-hearted and confused response. I never would have guessed that anyone would be yelling their pant sizes in my hallways at 2 AM, but it was happening. He revealed a knife, and glanced over at the corner, where an empty beer bottle and a cardboard box lay, resembling a target. “Alright! If I hit the beer can, I’ll give you all a pair of jeans from my clothing line. If I hit the cardboard box, you get ties, not jeans.” I never would have guessed that anyone would be offering to give away pants in exchange for a successful knife-throwing bout, but here it was, happening in my very own hallway.

I looked around, confused as hell, as the unreserved losers, wannabe entrepreneurs, and my Durham enthusiast friend cheered. A kind of anxious zeal rippled through the rag-tag group, and the clothing line owner wound up, like he was pitching a baseball. And that’s when it happened.

I looked down at the Durham County tattoo, and knew that something was going to go incredibly, terribly wrong. And that was the moment I predicted the future.

Clothing line boy launched the knife, and it landed squarely into the cardboard target. The group cheered and he stepped forward, swearing up a storm, like he had just won a boxing match. He knelt down, yanked the knife out from the cardboard. It flew from his fingers.

It launched toward us, nicked the Durham County tattoo, and fell to the floor. My friend examined the clear chip on his shoulder, as it slowly filled with deep, dark, syrup.

He looked up at me.

The only thing I could do was look at him and smile. I grabbed his good shoulder, and led him toward the kitchen, where I grabbed a clean towel, fastened it over Durham County like a land bound hurricane, and raised his arm, which was still holding a half-finished PBR. All he could do was laugh. He tried to lower his arm.

“Hey – keep your arm raised. Like you’re raising it to Jesus, or something.”

He buckled over, laughing, then slowly regained his composure. A chuckle slipped between his lips again, but he calmed down, finally. The muffled laughing and the music from the hallway crept back to us in the kitchen, but remained distant.

“What are you doing back in Durham?” He asked.

He shrugged and looked around. He lowered his hand and took a sip from his PBR, then returned it to it’s elevated position. Silence grew.

“I dunno either. Trying to make things work, I guess. I was trying hard to leave Durham, too, like you. It’s just a hard place to leave, I guess.”

He looked at his arm, then around the kitchen.

“Thanks for patching me up.”