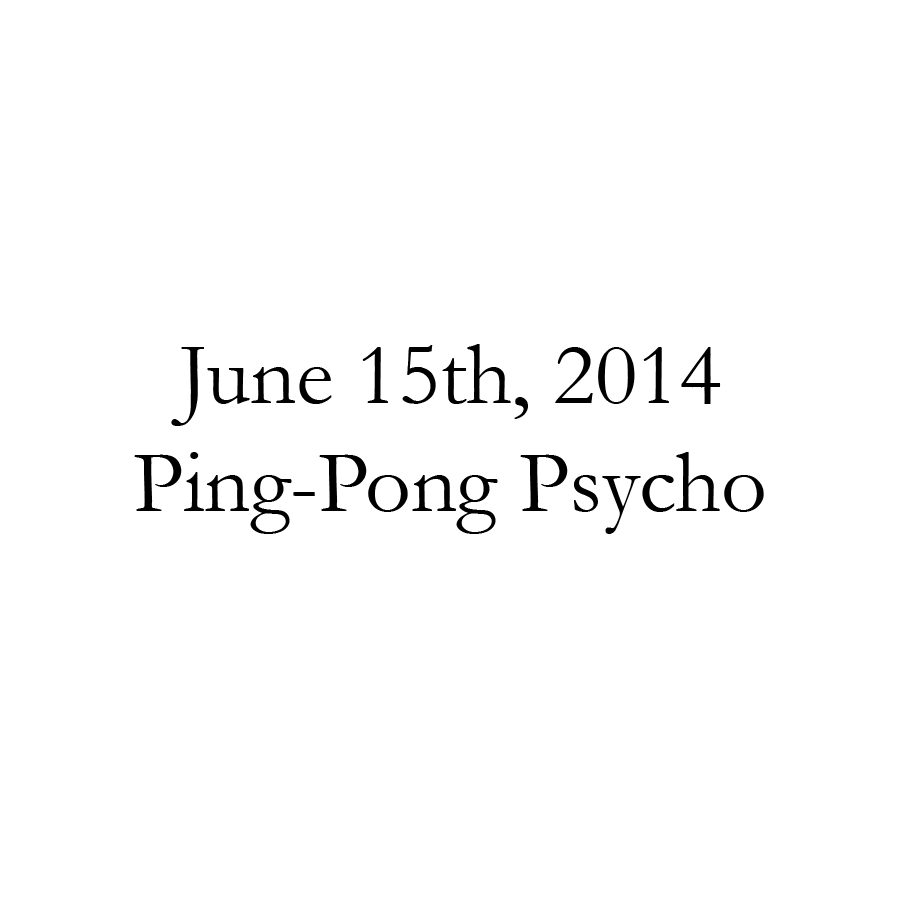 Please be aware that this story contains a profusion of harsh language throughout.

The Ping Pong ball tapped back and forth on the table, snapping like bubble wrap between children’s fingers. He lunged forward, missing the ball by inches.

“Fuck!” He yelled. His thin figure tensed and he jumped on his toes, as if a shock of electricity had vaulted through him. “Fuck!” His chipper and eager voice echoed through the large office space. He wasn’t the kind of person you would expect to swear – His clear voice and professional mannerisms rivaled that of a presidential candidate. His diction grew straight out of his time spent being coached by professional public speakers, and his subsequent time spent coaching others.

Travis just smiled and grabbed the ball off the floor. His chubby body exuded an unexpected friendliness, the kind that enveloped a person with the inescapable fact that he could never seem intimidating. “Seven to five.” He muttered, so as not to seem like he was rubbing in his lead. He stepped back to the table, and served, throwing a disorienting spin on the paddle. The hollow ball darted forward and hit the very edge of the table. Drake, still reeling from the shock-like trauma, waved his paddle fluidly and sent the ball back at Travis. Travis smacked the ball out of the air, like a fanatic with a flyswatter, and sent it soaring back. They volleyed back and forth, until finally Travis put a wickedly twisted spin on the ball. Drake lunged to catch it, but it spun out at the last second, and the trajectory was too much for him. It fell to the floor and bobbled to a corner of the room.

Travis chuckled, and looked to Stephen and Sammy, the couple of stragglers in the office who heard Drake’s first bout of profanity and decided to come on over. Travis hoped that they could disperse some of the intensely antagonistic frenzy that emanated from Drake, but they didn’t. He quickly realized that wasn’t going to relieve the situation in any way and so he darted over to the corner where the Ping Pong ball still bobbled, hoping to avoid Drake’s venomous glare.

“Eight, four,” he said, then served again. They shot back and forth, never missing a beat. Drake’s concentration sharpened, poisonously, and he stretched to catch every one of Travis’ hits. The spectators nodded and cheered as Drake and Travis responded to every hit with deadly precision. Drake missed a beat and the ball fell to the floor again.

“Relax, man, it’s just a game.” Stephen smiled, patting Drake on the back and injecting a dose of artificial lightheartedness and sportsmanship into the room. It was a valiant effort, but Drake rejected that effort like a violently revolting allergic reaction.

Travis paused, holding the ball before he served, once again. The pause became an awkward silence – then grew to an elongated, pregnant gap in the room.

“Go ahead, come on! Serve!” Drake yelled, once again, tensing his body with frenetic zeal for competition.

Travis decided to softly challenge. “Just take a deep breath, dude. You’re all stressed out, this is supposed to be fun”

“Fuck! It’s only fun if you win, don’t tell me to take a deep breath!”

They all eyed each other, awkwardly, waiting for someone to deflate Drake’s viral intensity.

“Well. I quit.” Travis said. “You guys can take my place if you want.” He said, nodding to the spectators. They nodded, declining respectfully.

“What? You can’t just fucking give up!”

“You won.” Travis said, dropping his paddle on the table and stepping away from the net. “That’s it.”

They all trickled out of the room, muttering about next week’s projects and about plans this weekend. Drake watched them go, and slowly tried to transform himself back into the ‘Normal Drake’. Everyday life Drake. Common Drake. Respectable Drake. Unflappable Drake. He rolled his sleeves back down and glanced in front of a window to calm his hair.

He glanced up at the white board where a rough bracket plotted out the office Ping Pong tournament, the final two slots filled with Drake and Travis.

Drake leaned out toward the hallway, back to normal office work. He had some emails to draft and a proposal to write before going home for the evening, probably around 8.

He started to step out of the room, but he paused. He went back to the whiteboard, grabbed the marker, and wrote “Drake” on the final slot of the bracket: The champion.

He plopped the dry-erase marker down on the table, and left.