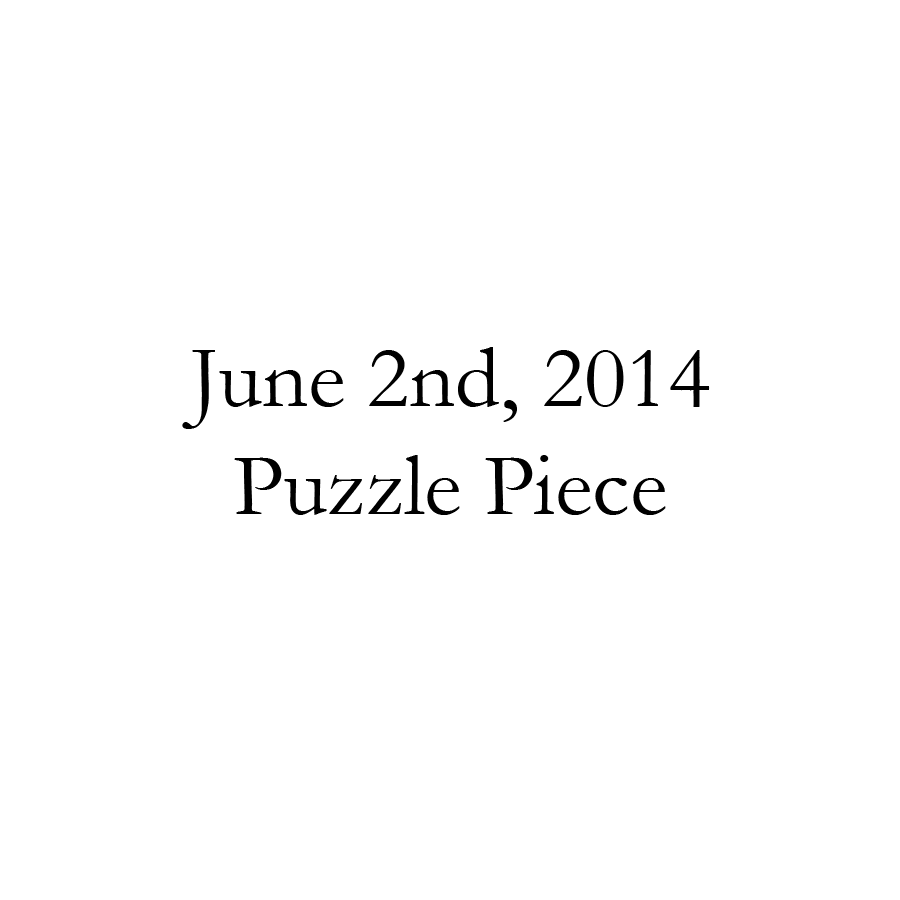 Puzzle pieces scattered out across the table. He widened his fingers and spread the pieces apart so he could see them.

Her frazzled, declarative voice ricocheted in the small dining nook beside the kitchen, but he obeyed her, nonetheless. He grabbed the top of the puzzle box and propped it up so that he could see it as he worked.

He began sifting through the pieces; an expression of elation gripped his face whenever he found two pieces that fit together. She watched over his shoulder, like a hawk, pointing out pieces whenever she saw two that fit.

“There! Those two!” She announced, urgently, as if the pieces would escape. “There! Don’t miss those!”

He patiently gripped the puzzles pieces with his stubby eight-year-old fingers and pushed them together, carefully. Slowly, the outline of the puzzle began to form. He brushed through the different shapes, and the tips of his fingers tenderly touched one piece in particular.

It wasn’t strangely shaped – it looked just like the other ones. The same pattern and texture. Nothing would have made this one stand out ahead of all of the rest.

He rolled it around between his fingers and lifted it off the table, studying it like it was a rare stone or precious metal. He turned it over several times, then started to try it with every other piece, methodically.

“What are you doing?” His mother squawked. “Don’t waste your time with that one, try looking for other one’s that fit. Here, try this. No, put that one down. Save that one for later.”

He obeyed, reluctantly, but didn’t lose that one piece in the pile of other pieces. Instead, he put it to the side, separate from the rest.

The puzzle filled in, and he could nearly begin to see the image form in front of him. When his mom wasn’t looking, he pulled out the special piece, once again, and started to try it with all of the remaining pieces. None of them fit, so he tried it with all of the open pieces. His mom noticed once more.

“What are you doing? That piece doesn’t fit here. Come on. Look, here, let me do it.” She grabbed the piece and started to fit it into a gap in the puzzle. The nooks and knobs didn’t quite align, but instead of trying something different, she bent the shape and gave it a solid twist, until the cardboard stretched ever so slightly enough so that it could awkwardly suspend the gap in the picture.

He looked at it, uncomfortably, and quizzically.

“Come on, look. There you go. What are you waiting for? It fits, see? What else do you want?” She picked up two more pieces and shoved them in front of him.

His skeptical expression spread, and he took the pieces from her hesitantly. Before too long, he completed the puzzle. But that one pieces still stood out in the middle – far too obvious that it wasn’t meant to be there.

“There ya go – Ya did it. Good job. Look at that.” She patted him on the back and excused her from the room, as if she was on some kind of schedule, and now that the puzzle was complete, she could move on to the next big issue.

He paused, and plucked the out-of-place piece from the puzzle. He pushed it around, trying to fit it somewhere else in the puzzle, but no matter how hard he tried, it would not fit. And even though the pattern was similar to the puzzle, it didn’t help to complete the picture. He sat in front of the nearly completed image, looking at the one-piece-gap in the picture, and at the one piece in front of him. One piece more, and the puzzle would be complete. Somewhere, there was a puzzle that would be complete with this single piece.

He grabbed the piece and put it in his pocket. His mother returned to the puzzle later, only to find a small gap in the center of the image.

“What is this?” She garbled. “Where’s the missing piece? Huh?”

“It’s not meant for it.” He said, “I think it’s meant for something else.”

He refused to reveal the piece, and she huffed out of the room with an indignant scowl.

He reached his hand into his pocket, and felt the puzzle piece. He tightened his hand around it.

It was meant for something, he was pretty sure. And he’d keep it until he found out what.