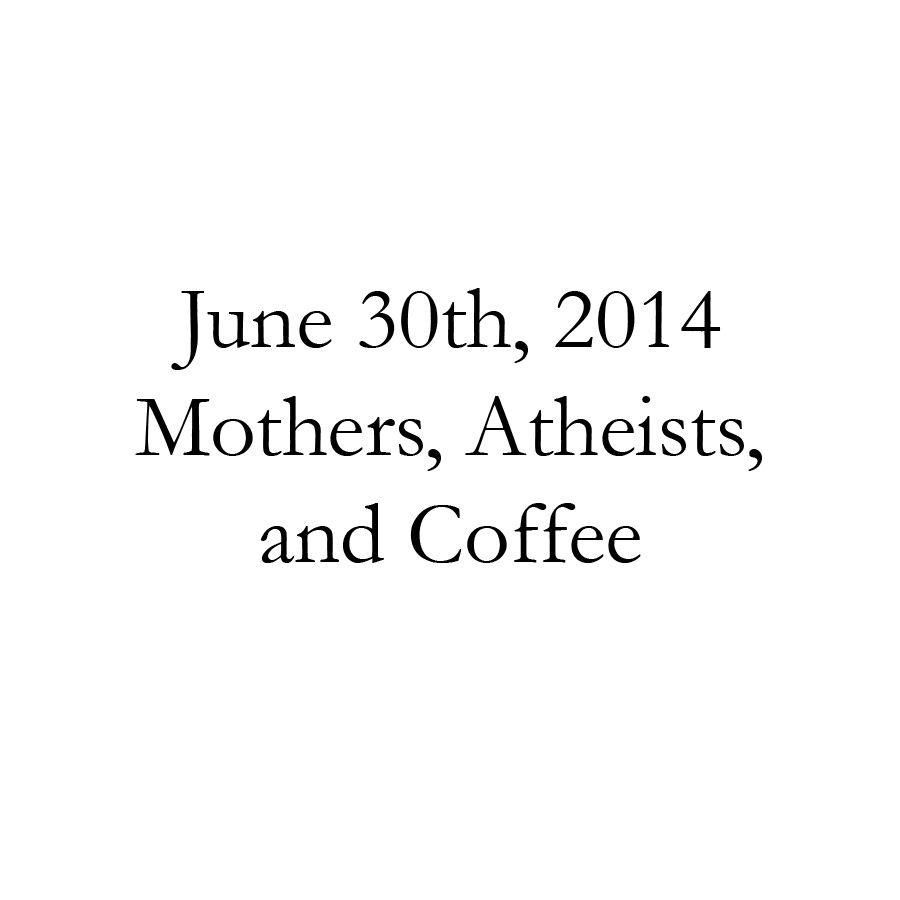 “Yes, mother,” He said, holding the phone to his ear like it was going to bite him, “But I’ve got to go, I’m meeting him in fifteen minutes and it takes fifteen minutes to get there.”

“Okay!” She squeaked. “You said his name was Jim, right?”

“Okay. Jim the atheist. I know you’ll do a good job of talking to him about God, you always have. I’ll pray for you in fifteen minutes, right when you meet him.”

They both said goodbye, and he hung up. He tied his tie, and his shoes, and stepped out the door.

He wasn’t as good at talking to Atheists as he thought he was, or even as good as his mother thought he was. But he’d accidentally started a kind of a terrifyingly public debate in the Letter to the Editor section of the Chesterton Daily, and after several back-and-forth’s, Jim contacted him via email and set up a meeting.

He’d met dozens of Atheists before, but never one that was so enthusiastic about meeting as Jim was. Normally, he tried to arrive early and find the opportune place to sit, but he’d been in a rush today, and his mother called him right before he planned to leave.

He bustled into the coffee shop, his baggy khakis swaying as he walked. He looked around. An athletic, smiling man in the back of the shop raised a hand and waved him down.

“Josiah?” He smiled and extended his hand.

Josiah nodded, vigorously. A friendly appearance was extremely important when meeting an Atheist for the first time. First impressions usually are, when things can go quite wrong – he’d heard.

“Good to meet you,” Jim the Atheist said, sitting down across from him. “Do you want to order anything?”

“Are you sure? Not even a coffee?”

Josiah let an uncomfortable smile glance across his face. He put his phone on the table, facing up, so he could see any calls he might miss. He clasped his hands together, and started, as if reciting a speech.

“I’m very glad that you wanted to meet today, because I believe it’s my calling to talk to people like you – People who are ‘lost’, if you will. You see, I believe that God created everything. He created you and me, and he predestined that we would be here, talking about-“

Jim smiled – Friendly, no hint of sardonicism to be found.

“I think you’re mom just texted you.” He interrupted.

Josiah looked down at his phone, tapped the screen, then continued, as if nothing had happened.

“- talking about God and his plan for your life. He has-“

“Are you close to your mom?”

This threw Josiah off a bit, and he struggled between reciting his speech and his answer.

“Is she done with her job?”

Josiah really stumbled now. He shifted his weight in his chair.

“I mean, if a mother does her job right, at some point, she’s not really needed. At least, not in the way that she was.”

Fortunately, Josiah had taken numerous courses on how to hold a strategic and tactical debate about God, Christianity, and the Bible. One of the most important debate maneuvers was ‘resettling’, or refocusing the conversation. He shifted into ‘refocusing’ mode like a teenager learning to drive a clunky stick shift.

“What do you mean by that?”

Jim smiled again and took a sip of his coffee.

“I dunno. I guess… I get why you’re trying to convert me and stuff. But Christianity is just like motherhood, isn’t it? What do you do when you’ve finally succeeded?”

“Succeeded? What do you meant by that?” Josiah refocused again, but nothing became any clearer.

He walked to the bar for a refill.

Josiah’s phone lit up with a text message:

I’m praying for you and Jim the Atheist. I hope it goes well.