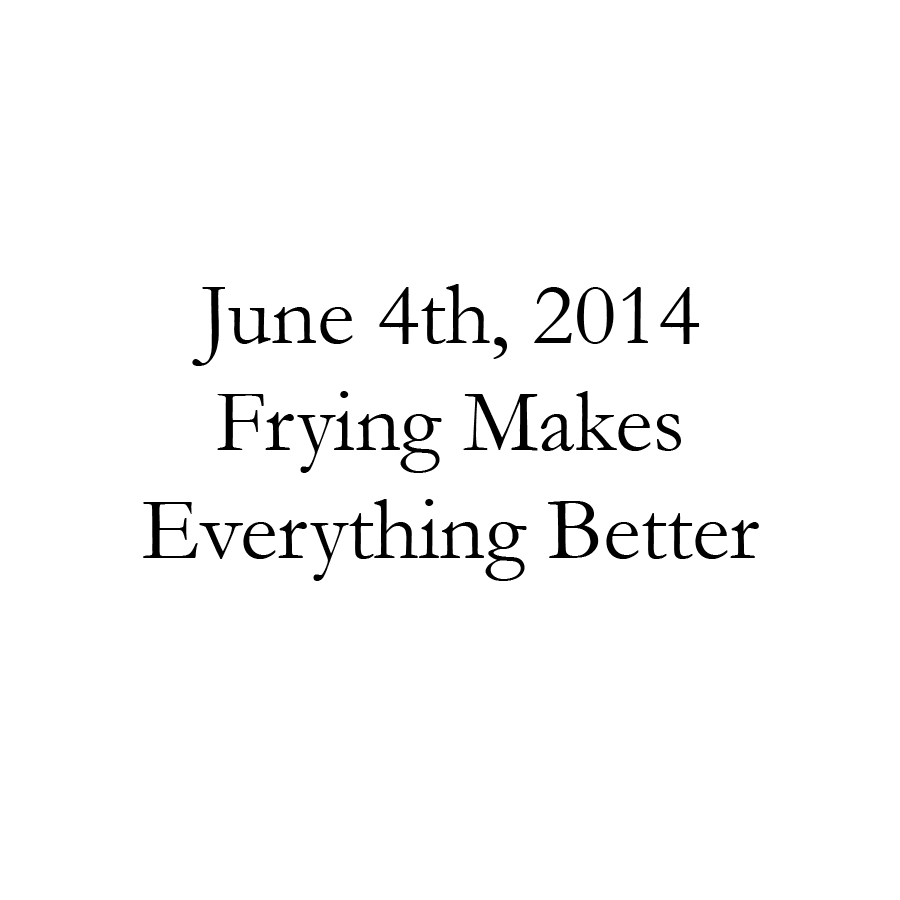 It didn’t matter what the hell it was, if my Papaw got a hold of it, he would fry it. And if he fried it, you would eat it. It was a longstanding tradition in my family, passed down from generations. And by generations, I mean that my Papaw started it. He would grin an ineffable smile that would bleed right through his thick, stocky mustache and hand you a plate of irresistibly crispy fried seafood.

It was understandable — frying food is the easiest way to make something taste enjoyable. So when he opened his restaurant, it makes sense that he would fry his food. His first menu had only one thing on the menu that wasn’t fried.

He might as well have birthed my brothers and me in frying oil. We grew up on fried baby food. If something didn’t taste right, it was because it wasn’t fried enough.

Fried shrimp, fried crabs, fried oysters, fried mussels, fried okra, fried tomatoes, fried hushpuppies — and that was just the beginning, I haven’t even started on the fried fish yet, but I’ll save that for later — that could take all night.

He became a staple in the low country. People drove hours and waited in lines that wrapped around the building so they could consume inordinate amounts of fried food. My Papaw shuffled between the hot, grease-splattering kitchen and the cool, screened-in dining rooms, saying things like:

“It doesn’t matter what it is, frying makes everything better!”

By the time I neared high school graduation, I was ready for a lot of things, but most of all, I was ready to get the hell out of the low country. I surprised a lot of people, including myself, with the schools that I applied to, and received more than my share of uncertain questions. But before I knew it, my acceptance letter from NYU arrived in the mail. Papaw waddled into the house, reeking of grease and happy customers, carrying the stack of mail. He sorted through them, one letter at a time, until he saw the royal purple envelope from New York City, addressed to me. He handed it to me, then plopped down at the table across from me.

“You wanna talk about it?”

I looked it over, and hid my excitement. My head started to race with all of the opportunities and people and connections and friends and enemies and companies and ideas I could interact with in the next four years.

I looked down at the letter, then back up, trying not to smile.

“You’ll have to watch out, too. Lots of gangs. And queers.”

“Yeah. I’ve been there, Papaw, I saw those things.”

He shifted his round belly in his chair — evidence of the longstanding tradition of fried food.

“Well…” He started, but sputtered, like the engine of a Jon boat that hadn’t been run in years. Finally, he started back up again. “So, you don’t want to run the restaurant? I mean, eventually, sometime?”

My fingers began to play with the envelope.

He nodded, his whole body shaking in unison. He said nothing. Then, finally:

“I’ll get a business degree, so, y’know. Maybe I can do something after. With the restaurant, I mean.”

“Yeah.” He grunted, with a little glimmer of enthusiasm. “Yeah, that’d be good.”

He was right about the city. It was expensive, and it was different. There were gangs, and there were queers, lots of them. They didn’t have seafood, at least, not what I called seafood. I got strange looks when I said things like ‘Y’all’ and called my dad ‘Papaw’. And people said my accent was ‘cute’ and asked me where the hell I was from.

I didn’t miss the humid stench of the low country marsh, or the thick buzz of mosquitoes on a wet, hot summer eve, but I sure as hell did miss that fried food. So we got in Dad’s pickup and drove to his restaurant.

He’d moved to a new location. It was bigger, more cultured (if you wanted to call it that), cleaner and more attractive. The kitchen was three times the size of the last one, and had more frying baskets than a Yankee chef would know what to do with. Dad led me into the kitchen, spreading his arms like a chubby southern god showing off his creation.

“It doesn’t matter what it is, frying makes everything better!”

I smiled, but restrained myself. The kind of smile you might have when you still have bad news tucked away your pocket that you haven’t revealed yet.

“What are you gonna do come May?”

The question caught me off guard, but only because I knew it was coming.

“I got an offer in Charleston, and one in Charlotte. Investment firms. Really good opportunity to learn. I’ve been in contact with one of the partners at-“

“Not coming back here?”

He stood, suddenly and violently. He bumped the table, clanging the silverware and the plates, and scooted out from his chair, storming away.

My dad left me at the restaurant that night. I walked out into the gravel parking lot and saw that his pickup was gone. My brother picked me up, took me back to the house, but dad didn’t say anything to me, and two days later I went back to New York.

It doesn’t matter what it is, frying makes everything better.

But you can’t fry everything.