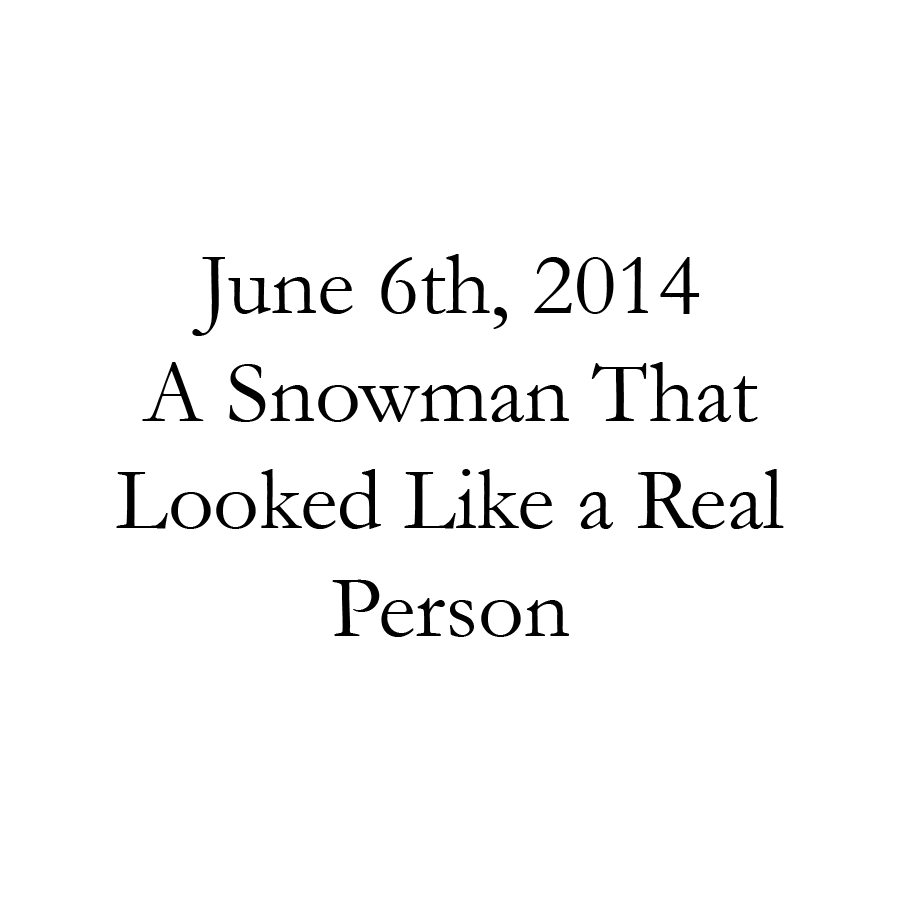 10:43. It was getting late. For me, anyway. My son, James, would probably stay up later, but then again, he wouldn’t be getting up as early as me tomorrow. It’d be even earlier than usually for me: The traffic would be worse because of the snow. I glanced out the window. It was still coming down.

I sighed, as if I was trying to muster the energy to stand, bid goodnight, and turn off the TV. But instead, I convinced myself to sit for another minute, watching the muted news flash back and forth from talking head to talking head. I didn’t know what they were talking about, but from their expressions and the B-roll footage, I guessed it had something to do with the delightful weather we were experiencing in Wake county. Snowstorms and ice, or something.

I looked over at James. He sat on the other end of the couch, reading contently. He looked unfazed by the late hour. I wondered if I’d had as much energy when I was his age, or if I’d wasted it all before I knew what I should do with it. I turned back to the TV. I sighed again, tapped the button on the remote, stood, and stretched.

I looked down at my son.

Tears streamed down his face.

Something flipped inside of me – Like that terrible feeling you get when you’re expecting Sprite and you get water, or the feeling of jumping into a pool only to find yourself immersed in an icy rush of chilled rainwater.

I sat down beside him and put my arm around him. I asked him what happened, why he was crying. He told me he wanted to talk to me, but didn’t know what to say. I tried to imagine what he would say.

It’d been a long day for him – Snow days always were long days for my children. James, being the oldest at 13, led the other two like a commanding general. It was like they thought they had a duty to take on the weather, building fortresses and creating snowmen in their own image. When I was a kid, a snow day was an excuse to sleep late. But not for my children, not for James. They took the first steps in the fresh snow that morning before they would’ve been on the bus. Their only break from crafting a world out of snow was at 4 in the afternoon, when they finally decided that they wanted something to eat. After a couple of bites of some peanut butter sandwiches, they ran back outside. The first time I made peanut butter sandwiches in years. It had started snowing heavily again right after that, and it continued into the night.

His quiet crying melted his words, but after a try or two, I knew what he was saying.

My mind raced, like the snow falling outside. I wanted to just tell him “Yes, of course you’re good at things,” give him a goodnight kiss on his forehead, and send him to bed.

He reined in his emotions, and his crying turned to small gasps and hiccups. He wiped his eyes.

“Who told you that?”

“Somebody told you that. Who?”

He shrugged off the question and started crying again.

Being a parent requires some kind of supernatural discernment of knowing when to let your child cry, and when to try to convince them to stop. I have in no way mastered this. But I let him cry.

I put my arm on his back and tried to comfort him, and he continued to cry. Finally, I decided I should probably convince him to stop crying. My mind started churning, once again, like falling snow.

He slowed, his head in his hands.

“You’re smart. You’re creative. I know that you’re good at those things.”

“You’re very creative. You built that snowman that looked like a real person today. I was so impressed.”

His crying slowed, and nearly subsided, but he kept his head down. I felt a stream of shallow words leaving my mind and my mouth before I knew what I was saying.

He kept his head in his hands.

I cleared my throat and tried to pretend like he hadn’t said anything. I was never good at pretending. A thick silence started to build, like a layer of ice on the windshield. I was real good at scraping the ice off the windshield.

“Don’t let anyone tell you anything else. That’s bullshit.”

He jumped a little when I said bullshit. I don’t think he’d ever heard me say that. His crying subsided, he lifted his head up. A hiccup gasp shook his small frame.

We sat, and he rested his head on my shoulder.

“It doesn’t matter what anyone else says. You’re good.”

And as slowly as the flurries drifted to the ground, a small tear trickled from my eye. I thought about how early I’d be getting up to beat the traffic to work tomorrow. I thought about how stupid it was that I’d told my son that he was good at building realistic snowmen, and that was why he shouldn’t cry about it.

I slowly wiped the tear from my cheek, carefully though, so he wouldn’t see.

“It doesn’t matter what anyone says. You’re good.”