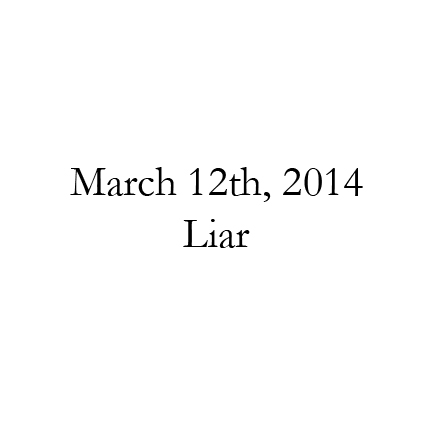 It wasn’t even really a lie – It was an accident, I promise. I never said anything that wasn’t true, and yet, omitted truths are a terribly rotten excuse for being able to say you never lied.

It wasn’t an accident with no one to blame, like a tree falling on a car during an ice storm, no. It was the kind of accident that happens on a hunting trip. Somebody pulled the trigger, somebody loaded the gun.

It was there, and I couldn’t deny the deception that I had allowed to stain my day.

I had a busy day, the kind that pushes and pulls you through it until you’re on the other side looking back, thinking “Did I really just go through that?” – Three key meetings: two for Smith & Rivers Associates (my employer), and one for a freelance client of mine, unrelated to Smith & Rivers Associates. I’d done financial planning and consulting on the side for years, and it was a continued way for me to develop, learn, and network beyond the company I worked in. Smith & Rivers knew about this, and supported it – They actually asked me to do financial planning and consulting for them as well.

When an employee at my office needs to leave early, they’re expected to request an early absence– anytime you need to leave early, it’s usually accepted, but you are supposed to notify and get approved by your teammates. Anyone who leaves early is usually treated with a little bit of skepticism. At least, that’s how it usually feels.

I don’t know what it is about our society that made us evolve to value time over productivity – At the dawn of time, work was directly related to accomplishment. If you were spending time on something, it was because it needed to be completed. If it didn’t get completed, that was your prerogative. Literally, if you didn’t work, you didn’t eat. Not because of a punishment- but because you literally did not do enough work to put food on the table. There was no General Manager telling you to stay for an hour longer, even though you’ve completed everything that you needed to get done in that day. There was no Office Supervisor commanding you to stay later or work at home if there was still work to be done.

We live in a society in which you’re expected to stay at an office for eight hours. If you’re there eight hours, you’re accomplishing the work that needs to be done. If you’re not, then you are slacking and being lazy.

I shouldn’t critique work culture as much as I do. My aunt Helen said that I was cut out to be a farmer, and maybe she was right. Maybe the sun and the weather should dictate my work hours, not some office supervisor who graduated last year, or CEO who is eating a knock off Panera Bread sandwich and drinking diet coke, in hopes that he’ll lose that gut and double chin.

When I arrived at the office that morning, ready for a full evening and afternoon of meetings, I received an email from my 4pm with a location change. The original location had been planned for a location that was a good 45 minutes away from the office. Because of this, I’d planned to leave the office at 3:15, arrive at the meeting place at 4pm, and meet until 5:00pm. Since my next meeting would require me to leave my office at 6pm (if I was leaving from there), I would only be able to get back to my office for 15 minutes in between meetings before I’d have to leave again. So in hopes to be more efficient with my time, I planned on going directly from my first meeting to my second meeting, and arrive at the second meeting slightly early, at 6pm.

However, the email I received in the morning required me to change the location of the meeting to a location that was much closer to my office – Only about fifteen minutes away. This would allow me to return to the office after my 4pm meeting, but it would leave me with the problem of having to leave the office early for a meeting that was in no way related to my company. By the time I had rebooked the location of this meeting, it was slightly too late to request for an early leave without awkward repercussions, just five hours later.

So I left it unaddressed.

My mistake of the day.

As 6pm rolled around, I packed up my things, and started to leave. My supervisor looked at me and asked:

“You’re headed to another meeting?”

I looked her in the eye, and said, with the truth, the half truth, and almost all of the truth:

And that’s when I lied.

“Alright,” she said, “Good luck and we’ll see you tomorrow.”

It was an anti-recipe: Composed of laziness, poor communication, selfishness, greed, and aversion to awkward situations. Had any of these not been slowly and quietly tugging away at my mind on that day, I would have stepped right up and requested an early leave, no matter how many people gave me skeptical looks the next day.

Each of those things: The laziness, the poor communication, the selfishness, the greed, and that aversion to awkward situations were tugging on my mind with just enough strength that they formed a deliciously uncomfortable situation as I walked out of the office.

I went to both of the meetings, went home, and went to work the next day.

Nobody asked, or wondered, or even cared.

Because even though I can deceive other people, the only deception I can tell myself is that it was an accident.