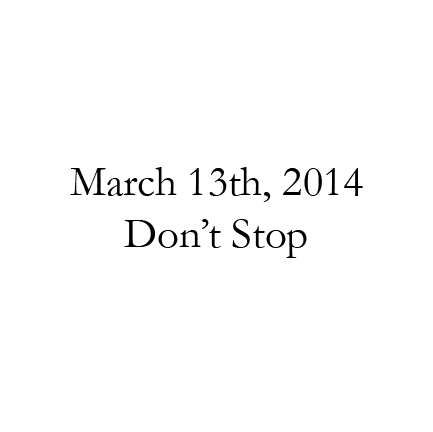 The words pounded through my head – I could hardly generate any thoughts other than these. I breathed slowly – and each breath felt like a sheet of ice running down my throat.

It was the final day of a long four weeks. I wanted to believe that the project was coming to a close today, and that it would be a much welcome and much needed rest from the eighteen-hour workdays. But it wasn’t. If everything went according to plan, it would be the start of the project – Everything up until this point would suddenly become the precursor, the prelude to an even more strenuous and consistent obligation. I felt almost entirely physically spent, and yet, if we had succeeded, we had the hardest parts ahead of us – Like a politician who spent everything on the campaign, only to find that he was elected and now had no energy to serve.

My brother works on the Hill (as a journalist, not a politician, mind you), and he told me that this is an actual issue that many politicians deal with – They call it ‘Premature Election Fatigue’.

My brother said that different people have come up with ways around it – Some politicians make a guide of how to run things if they get elected, then let their aides run the show for the first couple of weeks in office. Some take a break in between Election Day and inauguration. Some of them slow things down. Some of them speed things up, and end up crashing later, or let the stress creep in some other way. They say that Obama, Clinton, and Reagan never experienced ‘Premature Election Fatigue’, and kept on going, one term after another, without stopping.

I was determined to do just that.

I was determined to be like Clinton, or Obama, or Reagan, or any other politician that can keep going and going for eight years straight. They continue at the highest level of performance – no matter what level of stress, or fatigue – physically or mentally.

So I was braced and ready for the turning point on this project. Once we delivered our presentation, we would have twelve hours before they would announce the winners of the bid. If it was us, then we were on board for year, at least.

I hadn’t showered in twenty-two hours, I hadn’t eaten in fifteen, I hadn’t seen Sophie in two days, and she was beginning to worry. I had already missed three calls from her, so I called her back. On the third ring, I realized that it was 2:45am, not 2:45pm. She answered before I could hang up.

“Are you okay? You sound sick, did you sleep?”

“No, I’m okay” I said, trying to perk my voice up. “We’re almost done with our presentation, and we go on at 9. Can I call you after?”

“Sure.” She said. Her voice, though tired, sounded so meltingly sweet and beautiful, like some kind of radiant sunlight that trickled through the cell phone signals and between the static. “I’ll be at work, but call me anyway, I’ll step out for a second.”

As I hung up the phone, I started to feel the weight of my exhaustion. I wasn’t sure if it was hearing Sophie’s voice, or just the knowledge that I wouldn’t be getting any sleep before the sun rose over the tips of the skyscrapers again. I popped four vitamin C pills as I lay the phone down on the table.

I may have sounded sick on the phone, but I got a kind of pride from the way that I threw myself into this project: The long hours of work, the number of nights without sleep, the undivided attention to details and the time management – They all showed people what I was capable of, and I liked that idea. I liked that idea a lot.

My phone beeped with low battery. I rubbed my eyes, which were now giving me blurry vision, and headed into the other room to charge my phone.

That’s where they found me.

I woke up in a bed, in a hospital.

I tried to move, but my limbs were sore, swollen, and numb.

I’d collapsed from fatigue, minutes after I talked with Sophie. My body had shut down.

My eyes crept open at about 8 PM, almost twelve hours after the presentation. A doctor and a nurse were in the room when I awoke.

“You keep this up, and you’re gonna be in a lot worse shape, you know that, right?”

“What about them?” The doctor asked, bluntly, clearly not amused by my great dedication.

“They go for months and months, non-stop, then they get elected and keep going, sometimes for years.”

The doctor looked at his clipboard, and prepared to follow his nurse out of the room.

The doctor lowered his clipboard and looked me in the eyes.

“I don’t care if you’re Democrat or Republican. You’ve gotta sleep, or something bad is gonna happen. They’re just better at lying about it.”

He left the room.

An hour later, our team was selected.

I lay in bed, looking up at the ceiling.

Knowing that tomorrow I would wake up, and do it all over again.