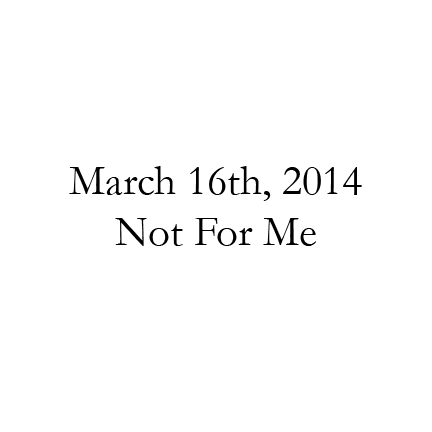 I walked down 6th Ave, with no intention other than getting as far away from Stefanie and my apartment and the overly sweet aroma of her perfume.

My mind raced through the contorted words that had spewed from my mind just minutes before:

“I’ll pay you, come on, please, just give me a chance, you’re not even giving me a chance. Just don’t-“

A limousine passed me as I treaded the cracked sidewalk. I’d ridden in so many limos I forgot what it was like to walk on an avenue instead of recline. I’d forgotten what it felt like to be the one on the sidewalk, instead of the one passing.

I wandered away from 6th Ave, and towards the nightclubs. The sidewalks flooded with drunks and prostitutes, with dancers and partiers, drug addicts and teenagers who had no business being there. I watched as limousines stopped and unloaded celebrities that had nothing better to do with their money than try to see how much they could spend in one night – A game at which I was one of the best.

I walked through the garbage-ridden alleys behind the bars and dance clubs and strip clubs, and waded through the waste that built up on the sidewalks. I could’ve been back at my apartment, wrapped in the sweet fragrance of Stefanie’s perfume, but no – there was amount of money I could pay to be there.

I made my way toward the pristinely swept streets of the financial district – By this time the sun was beginning to rise, and the bankers and traders and stock chasers were lining up to be the first to enter the wealthy sanctuary of stock exchanges.

The sun rose slowly, and warmth slowly crept through the city, waking the tourists and the pedestrians, drawing them out like magnets to the city’s spectacles. The statues and memorials, galleries and museums filled with crowds of curious spectators, eager to see something new. But I had seen dozens of these attractions, and owned even more.

I passed restaurants with savory foods and exotic meals: Seafood, Asian, Thai food, Sushi, Mexican, Mediterranean, Greek, Italian. The fragrance of divinely cooked cuisine gripped me, but I passed them all. I walked down 14th street, stopped at a fast food hole, bought the worst hamburger I could find, and scarfed it down with extra ketchup.

I reached the end of my wandering and had nowhere else to go, so I turned around. I passed a homeless man on the street, dressed in rags and reeking worse than the garbage in the alleyways. He didn’t even look my way.

He looked at me, scared.

I gave him my wallet, my cards, my license, my ID’s.

He shook his head violently and muffled words through his crooked teeth:

I walked away, but turned back to answer:

“There’s nothing left. Not for me, at least. Maybe for you. But not for me.”