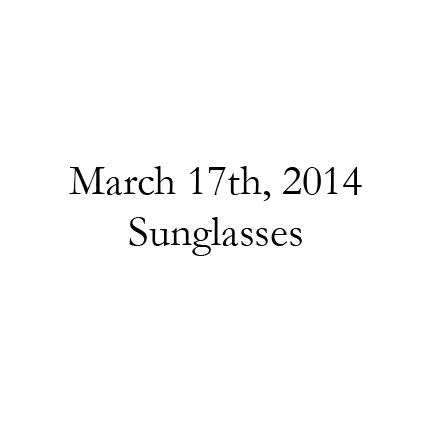 I surveyed the store as the customers’ interest in shopping slowly faded and the store neared closing time. I began to pack up and close up the second register. A middle aged couple approached and I noticed out of the corner of my eye. They walked up to me with a friendly air, as if they knew me.

“Hey there!” The woman began, “I thought that was you!”

I looked up, expecting to quickly recognize her as a mother of a high school friend, or a woman in my mother’s quilting group. But I didn’t. I had never seen her before in my life.

“How’ve you been? It’s been so long since I saw you. Michael’s been doing well, have you talked with him recently?”

I stood, stunned and speechless. After a moment, all I could mutter was:

“Yeah, he was a tough professor.”

They smiled and wished me the best after I finished their purchase of a brand new pair of sunglasses. As they left the store, they turned back and waved.

“Swing by the house and visit Mike sometime.” They said, “He’s been busy, but he’d love to catch up!”

And they left the store.

It didn’t frighten me that they knew who I was, or where I worked, or that they were the parents of my high school best friend.

I saw Mike the next day, and frantically described what I’d seen. Of course, he didn’t believe me.

“Dude, there’s no way – Just give it up.” He tried to tell me. “There’s no way, it must have been some kind of misunderstanding or something-“

But it didn’t matter. Like nearly every memorable high school friendship, it had been built on practical jokes and well-intentioned deceptions. Finally, he decided to at least entertain the idea that somebody with a son named Michael Holloway might have confused me for a friend of their son. I was skeptical, and persisted.

“Look, dude, I’ll call my parents right now to prove to you that that didn’t happen.”

But Mike had dialed the number and pressed ‘Call’. The phone rang. Once, twice, three times.

“Hey, mom.” He chuckled, as she answered.

The muffled disconcertment and relief of his mother’s voice buzzed through the phone. As we left my house and made our way toward his car, he explained to his mother the story that I’d recounted from the day before.

“Yeah, he says there was this couple that was pretending to be you or something… Yeah, I know, right?”

We got into his car, and as the conversation ended, he laughed with an indifferent confidence. He rolled down the windows and blasted the music, but quickly noticed my stiff behavior.

I was hesitant, but agreed. Just to clear things up.

I almost said “yesterday”, but I stopped myself. A terrible breed of nervousness and awkwardness blended together in the pit of my stomach as Mike raced towards his parents’ house.

“My parents mentioned it?” he laughed again, “Man, you need to chill out, I’m tellin’ you.”

I was silent until we got there.

We went inside, and I’d never been more comforted to see my friend’s parents. They made me feel at home: They fed us and sat us down in front of a large screen TV, invited me to dinner for the night, and asked how I was doing. They asked about my summer plans and my family, about my sister and her husband. They asked about college applications and if there were any girls that I was interested in. It had always felt like home.

Finally, in the midst of talking about our plans earlier in the day, I stumbled onto the subject of the incident the day before.

“Anyway,” I said, “When Michael called you this afternoon, I-“

“Michael called this afternoon? Oh, dear, I must have put my phone onto vibrate, I-“

“Mom, no, you answered.” Michael paused, uncomfortably. My stomach sank a little bit –

Did she forget already? Please, tell me she forgot already…

“I didn’t get any call this afternoon, I left my phone in my car while I was shopping, I-“

Michael grabbed her phone, hastily, his thumbs darting through to recent calls, until he found it:

“Michael, I got you some new sunglasses.”