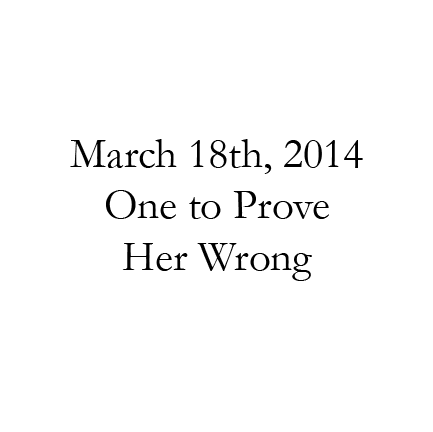 One to Prove Her Wrong

Calling someone up on the phone after standing them up is never easy, I suppose. If it was easy, there would probably be something fundamentally wrong with the universe. If you’ve gotten yourself into this situation in the first place, you probably deserve it.

So that’s what I told myself as I scrolled through my contact list and clicked her name. Sometimes when I make a really important phone call (usually a job interview or something), I write down some bullet points, so if I freeze up I can at least check a cheat sheet. But I didn’t do that for this call. I figured I should just wing it. It would probably be more authentic anyway. And that’s all that I wanted. My only prayer was that that was what she would want as well.

Authenticity is so often overlooked – The phone rang several times and I, for the first time, started to think about what I was actually going to say. I’d thought about what I wanted to say a dozen of times before this (I told myself that was the reason I’d waited three weeks to call her and apologize, but fear and insecurity weren’t absent in this case, either).

As I waited for her to answer, I felt a kind of blindness drift over the circumstances like a thick mist – I didn’t know whether to expect her to seethe anger, or radiate forgiving, or slam me with rejection, or perhaps just accept me. I cleared my throat for the fifth time as the phone rang, as if clearing my throat once more would rid my body of verbal insecurities and I would speak with the confidence of a seasoned politician, and the broad, deep voice of Clooney-era movie star.

My throat tightened and I suddenly became very thankful that phones exist without automatic video capabilities. I’d trained my voice fairly well not to waver, but I was sure that my facial expressions revealed the real depth of my uncertainty.

Either she’d deleted my number in a fit of rage three weeks ago after I was a no-show, or she’d gotten a new phone in the past three weeks. Either one was possible (or both, technically). She eventually claimed a new phone.

Our conversation continued, cautiously and casually in a strange way, punctuated by background noise originating from nearby trucks or roommates laughing in the other room.

My lack of expectations was accurate. And she met me with hints of each different potential reaction, from anger to denial to rejection to even some small gestures of understanding. But after all of that, she accused me of falling into the cliché of a white Anglo-Saxon Catholic male in his early twenties. And to that I had no reply, excuse, or rebuttal. She lumped me in along with every other guy who had stood her up or rejected her, turned her down, or held her back, and now, I was getting the turn around from it.

“You’re all the same,” she’d said, “You’re just like everybody else.”

Our conversation ended, and in some way I believe that she accepted my apology. And yet, nothing about the situation had changed, nothing had cycled, nothing had been altered or redeemed.

I hung up the phone, clearing my throat with the same intention of recovering my voice after an intimate and frightening conversation. I hung up the phone with as much hesitance and insecurity as I had when I picked it up.

And on the other end of the phone, she may have hung up feeling as empty and as lonely as she had before I’d called – but I would never really know. I just had to hope that the words that I said made some kind of difference.

And yet, that was the one thing that I might never know.

I put my phone down, and wished that there was something that I could have done to escape that.

What I didn’t know was that after we hung up, she put her phone down, got on the train, and she, too, wished that I had been different: the one to prove her wrong.