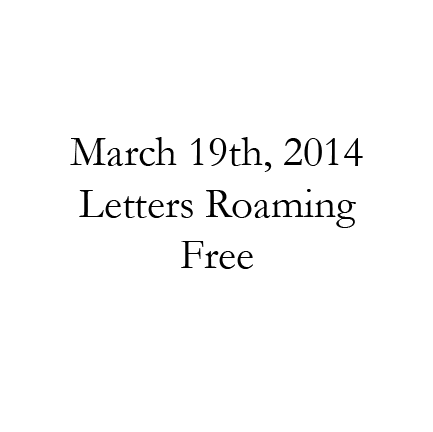 I started to reply to the message that Eve had sent me, but not with the actual words that I wanted to tell her. I stopped. I erased all of the fake letters and the fake words that were really just filler – Filler so that I could spend as much time as possible writing to her, and so that she would spend as much time as reasonable reading what I wrote, and I would feel as close to her as I could while I was in Chicago and she was in Atlanta. But they were words and letters that I would never really say to her. Words that I would never really send to her. Nevertheless, they escaped from my fingertips like prisoners, aching to be freed from my mind and put onto the page.

“I’m going to be in Atlanta very briefly over Easter weekend – will you be around? I’d love to see you and get coffee and explore Atlanta.”

I don’t even drink coffee, that’s just a thing that people say, and it sounds less intimidating than “Buy you a drink” or ‘Buy you dinner’.

But I didn’t want to buy her anything. I just wanted to share with her. Or to learn from her. Whichever one sounded less weird and less stalker-esque. But no matter what I told myself, the few times I walked with her, it felt to me like she was the kind of person who could make me see things in a different way. And that was exciting.
I read over the words that I wrote, over and over, as if reading them just one more time would reveal some glaring error to fix or fantastic insight that I could share with her.

Ooh- I thought – Give her an out, always give an out. So I added:

“I know Easter weekend can be really crazy, so no pressure –

Wait – no, that sounds like you’re pressuring her. Just write it naturally; like you would say it, even though that would probably be worse, and you would force her to read through several ellipses. Try it again:

“You’re probably pretty busy over Easter weekend, but I’d love to see you if you aren’t out of town.”

The words begged me to actually be written and to actually be sent. They pleaded with me to not be locked away in some file or left to collect a layer of digital dust in a draft folder. Each letter of my potential message climbed out of it’s prescribed order and started to shape words that wouldn’t allow me to escape them.

As a desperate measure to avoid giving in to the words, my mind started racing with reasons why I should drop the correspondence altogether – Why would she want to see you? You hardly even know her. When was the last time you saw her in person? Three years ago?

The words rose up, off of the page, wrapping around my neck, moving my fingers to put the words down onto a page or moving them to tap on the keys and force the story from my mind to my eyes. I watched as the false words that I’d try to hide behind so many times came to life on the screen. They wavered and dimmed as they fought my hands and possessed them. I looked at the screen as the letters pushed and pulled my hands toward sending the message.

I stopped all of them, I shut them all off. I closed the computer and threw my pen away. I tore the paper and threw it in the garbage. As the letters lunged toward me, I killed them.

I had let all of these letters play and pretend that they were the ones to be sent. I had let them stretch and run and explore, like a bird without a cage. And even though I was happy that I had tamed the words that roamed the pages of my outbox and of my journal, Easter weekend still came and went.

And I was left.

Wondering what would have happened if I had used no filler, and let the letters roam without a fence.