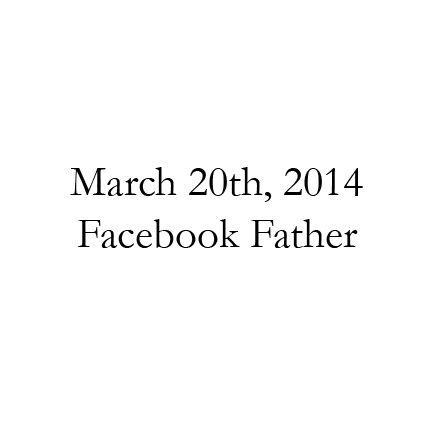 “I do know, okay? Don’t try to tell me that I should remember everything about his life, okay? I was there, he was my own damn father, I don’t need to look him up like he’s some kind of history book!”

I don’t know what took over me – All the pent up anger and resentment and bitterness had festered and grown in me like roots of an oak tree until they had such a strong grip, and all I could do to fight against them was take a poor excuse for a hatchet and start to chip away at the base of the wide tree trunk. I hung my head in shame, feeling the burden of irresponsible and uncontrolled emotions weigh down onto my sunken shoulders.

She just looked at me, trying so hard to hold back tears, I could tell. Her lower lip quivered and her chin wrinkled like a schoolgirl who had just dropped her books in the mud. But she didn’t cry, even though she deserved to, and would’ve been right to. Instead, she just looked at me, adjusted her glasses, and said, so confidently and gently for a woman who had just lost her husband: “Please.”

She handed my father’s laptop to me, and left me standing in the open foyer with no other option than to turn and to leave.

I joined my wife outside in the car. If I was that book that my mother had dropped into the mud, my wife was the only one who could read through the stains of wet dirt all over my poor flimsy pages. She didn’t say anything. She just kept her eyes lowered.

“Aren’t you going to look at it?” She asked me that night, when she was brushing her teeth.

“No.” I said. I had no interest in piecing together fragments of my father’s life through his computer documents and his Facebook page.

Once again, she lowered her eyes

“There’s nothing that I want to find out. I already knew enough about that poor fu-“

“It’s like he had some sick obsession with controlling his kids. I don’t need any more of him.”

“What is that supposed to mean?”

“Well, there’s no thing that I want to know about my father.”

“Facebook goes back pretty far. He probably had it for what, forty years?”

And that was all it took. That one conversation piqued my curiosity. After she’d fallen asleep, I snuck out of bed and opened the laptop. It was an old model, probably a year old, and took a full five seconds to turn on.

Finally I loaded Magnitude and pulled up Facebook. My father’s account password was memorized, but the first thing I did was view it in case I something happened to this computer. I clicked ‘View/edit password.”

Why would my dad use my name as the password? Was this some kind of joke or something?

I ignored it and moved on to my father’s messages.

The recent messages were boring, mundane, and sparse. 9 months ago: an old friend from work asking how he was doing in the hospital; year and a half ago: a neighbor asking how he was doing and making a joke about seeing each other in their backyards the other day. Several ‘Happy Birthday’ notes from family and friends. A message that I sent him two years ago asking if he could pick my wife up from the airport for a business trip she had in Raleigh, which, of course, he hadn’t responded to. My wife took a cab.

Boring, but I flew backward in the archive and visited five years ago, when my father reached out to a couple of extended relatives to try to conducted small talk through the digital expanse of the internet.
Ten years ago, more friends, more family. Quick, cute messages to my mom, messages to friends who wanted to schedule a day for gold, which my father enthusiastically replied.

Enough of that – I was alive and around for all of that suburban garbage that plagued his life. I flew backward in the message archive, past 2030, 2020. I passed thousands of birthday wishes and invites and hellos; I passed vacations and catch-ups and meetings. I passed my sister’s birth in 2022, and my birth in 2020.

It was a jumbled mass of every correspondence that my father made in his entire history on Facebook. No thank you.

I reached to shut the laptop, when something caught my eye. It was a message with my name in it, to the woman who would eventually become my mother, and his wife.

Six years before he was married.

I backed up and started to read.

“Yeah, def not a cool situation. I’m not happy about it, but I’ve realized lots of the stupid shit that I did and it made me learn so much. I feel like such a different person than I was.”

And her response. Even forty years ago, my mother still sounded the same:

“Yes, I can understand that feeling in my own. It’s beautiful luck that our mistakes cause us to grow. It reminds me of my time upstate 😛 terribly frightened, not happy, would take it back, but learned and changed. What changed the most in you?”

“Just looking forward, y’know? I don’t want my kids to do what I did – I don’t even want them to even know. What would a kid of mine think if she knew that I was arrested before I even got to college? Not cool. No way am I gonna tell them. I wish I was a better role model – at least now I know what to keep my kids away from…”

They continued on, and I skimmed forward to my mother’s message:

“…If you have a son, you should name him a name that means ‘protected’ or something…”

I skimmed to my father’s:

“…that’s such a cool name, I’m gonna use it as my password…”

I stared at the screen in a dull, slow, shock, until hot tears welled up in my drying eyes.

The roots of the oak tree that had grown deep roots of resentment loosened and frayed at every word of those damn Facebook messages, as if each word were a raindrop, adding and adding and adding until a torrential flood slowly uprooted the residual bitterness that had seeped into my life since the constraints of my youth.

The rain of my parents’ messages poured onto my hidden angers until all that was left was the soft earth and the thick mud: The same mud that caused my mother’s schoolgirl lip to quiver after dropping her books into it; the mud that swallowed the pages of my life and smeared wet earth across my perception of my own father’s life.

My fingers relaxed over the keyboard and track pad.